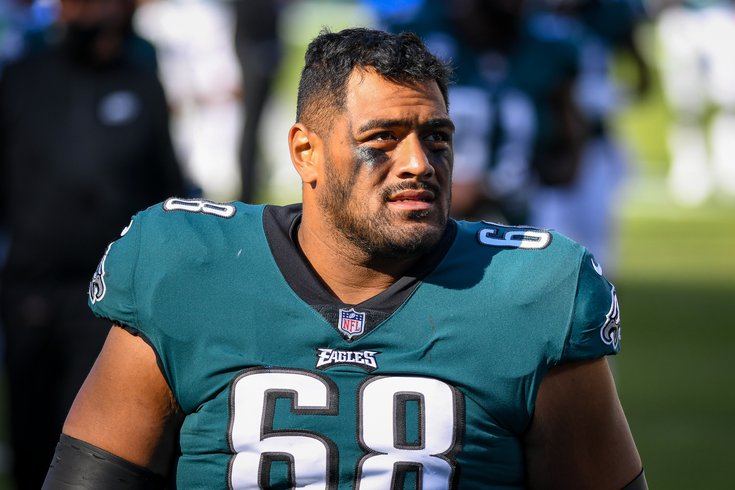 Maybe it was apropos that the Philadelphia Eagles finally took the shrinkwrap off of Jordan Mailata in Silicon Valley.

After all the tech industry knows a thing or two about projects. And for every one that becomes a staple in your life, there are dozens that will fail.

Mailata, the 23-year-old former second-tier Australian rugby player, finally turned into a left tackle during Sunday night's 25-20 upset win over San Francisco, a victory that "vaulted" the Eagles into first place in the dismal NFC L-East despite the fact that they won for the first time in the calendar year 2020.

The Mailata project was sped up after a strange week in which the 38-year-old Jason Peters tapped out late against Cincinnati after being kicked in the shin before missing two days of practice with an illness. He then showed up Friday feeling discomfort in his foot and an ensuing MRI revealed a toe injury that is projected to cost Peters several weeks.

And that meant the Eagles needed yet another new left tackle, technically the fourth try in 2020 at one of the game's most important positions.

The original plan, of course, was 2019 first-round pick Andre Dillard until he tore his biceps in training camp. The obvious move from there was moving Peters back to left tackle from right guard where he was brought back for one more run to replace the injured Brandon Brooks. Peters balked at first trying to leverage the Eagles into a little more guaranteed money.

Matt Pryor was the placeholder until the Eagles acquiesced and gave Peters an extra $1 million.

Now that Peters needs to be replaced for a bit, Jeff Stoutland had options, none proven mind you but a virtual cast of thousands.

The Eagles O-Line coach could have revisited Pryor, who took over at RG once Peters' replacement, Nate Herbig, switched sides to left guard after Isaac Seumalo went down with a knee injury.

Stoutland also has the two rookies from Auburn, fourth-round pick Jack Driscoll, who manned right tackle when Lane Johnson was out Week 1 with ankle surgery and again when Johnson was forced in and out of the lineup against the 49ers, and Prince Tega Wanogho, a sixth-round pick on the practice squad who actually took reps with the first team in practice on Wednesday when Peters was ill.

Of course, that was only done because Mailata was filling in for Johnson at RT as the Eagles tried to get the Pro Bowl RT through the week.

In the end, the musical chairs stopped with Mailata cramming his 6-foot-8, nearly 350-pound frame into the final seat, a player who has spent three offseasons trying to learn NFL football from scratch and becoming capable of blocking the best edge rushers on the planet.

Luckily for Mailata maybe the best edge rusher in the world, Nick Bosa, wasn't suited up for the 49ers after being lost for the season to a torn ACL. Dee Ford was also out and San Francisco was down to Kerry Hyder, a capable veteran but no standout.

On first view, Mailata held his own save for a few issues with various stunts and a drive-killing false start that wiped out what likely would have been a Carson Wentz sneak for a first down.

"I gotta give special thanks to Joe Ostman this week," Mailata said. "Joe really worked me during all the reps this week. I feel like he prepared me for this game. Even when I didn't know I was starting he worked me, made sure that I was getting good looks. Made sure I was getting off the ball, getting on the snap counts as well. So, hats off to Joey Ostman, 'Smokin Joe.'"

The real judges of Mailata’s play will be Stoutland and Wentz, who needs to feel comfortable with his blind-side blocker and seemed as even-keeled as possible with so many moving parts in front of him.

"I mean I feel like he did a great job," Wentz said. "You know, I'm so proud of him and Jack [Driscoll] and just stepping up when asked. You know it was one of those things that we didn't know who was gonna play this week, where they were gonna be and decided yesterday it's Jordan's time.

"And then for him, how hard he's worked. Ever since he's been here to get this opportunity on Sunday Night Football and to do a great job. I think the whole line did a great job against a really good defensive line over there and he held his own and did a great job. ... I'm just proud of him and then really everybody for stepping up."

Film or no film, on any grading scale, Mailata passed with flying colors under the circumstances.

And the project has officially turned the page to prospect.

"I'm not trying to fill anyone's boots," Mailata said. "I'm trying to make my own boots. So one thing I came here to do. I want to put some respect on my name and tell people that I'm not a rugby player anymore. I'm a footballer."