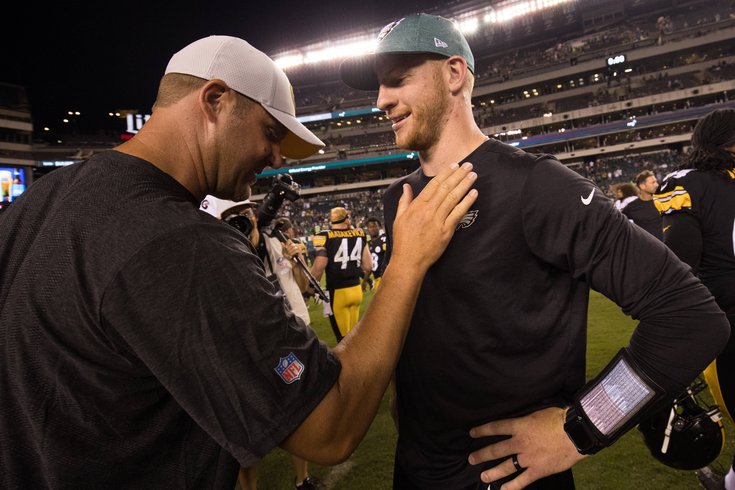 Ben Roethlisberger and Carson Wentz after a preseason meeting in 2018.

For the gambling enthusiasts, here are my Week 5 NFL picks. To note, the team logos indicate who I think will win the game, not cover the spread. At the end of the picks, I'll note a few teams that I like based on the spread. All the below spreads are courtesy of the consensus Week 5 odds at TheLines.com.

Buccaneers (-3.5) at Bears: Gee, I wonder if anyone will point out that this is a Tom Brady - Nick Foles rematch? In case you're unaware of the history between the two players, Foles was the quarterback of the Philadelphia Eagles when the Eagles beat the Brady-led New England Patri*ts in Super Bowl LII.

I'll take Brady and the much better Bucs here, and I'll even lay the 3.5. Also, is there anywhere offering odds on whether Brady will shake Foles' hand post-game? I'd like to take those, as I believe that Foles won't be a sore loser bitch if the Bears come up short on the scoreboard.

Eagles at Steelers (-7): The Eagles pulled off what was no doubt a very relieving win in Northern California last Sunday, but the reality is that a few bad turnovers by the Niners aside, they still clearly got outplayed.

Heading into Pittsburgh this Sunday, the Eagles will face a well-rested Steelers team that did not play Week 4, as their matchup with the Titans was postponed. This matchup reminds me a bit of the Week 1 Football Team matchup, in that the Steelers have a deep and talented stable of pass rushers, led by T.J. Watt, Bud Dupree, and Cameron Heyward.

Meanwhile, the Eagles are down starting LT Andre Dillard, LG Isaac Seumalo, RG Brandon Brooks, and replacement LT Jason Peters. Additionally, RT Lane Johnson is playing hurt. Yes, Jordan Mailata filled in and played well against the Niners on Sunday, but I'm not going to overthink this one. The Steelers' pass rush vs. the Eagles' injury-decimated offensive line is a huge mismatch.

Panthers at Falcons (-1.5): The Falcons are more talented, but how can you pick this team to beat anyone right now? That said, normally if I'm picking an underdog to win outright, I'm taking them with points all day. I'm not doing that here, as I can't trust the overachieving Panthers yet.

Raiders at Chiefs (-13): Taking the 13 is tempting. The Chiefs haven't rolled over everyone they've played with ease, and yet, when you look at their score results, they have three wins of 14 points or more. I'll just pass.

Rams (-7.5) at Football Team: The Football Team have officially benched Dwayne Haskins, and inserted Kyle Allen (lol) into the starting lineup, partly because he knows the offense better.

What a stupid franchise. I can understand not being in love with Haskins, but what exactly are you getting by starting Allen? Is he going to be better than Haskins? Maybe. Is he going to make you a Super Bowl competitor? God no. Does he even make you a competitor in the God-awful NFC East? He probably doesn't even do that!

Haskins has just 11 career starts, and he's only four games into a season in which he had a shortened offseason to learn the playbook behind a shaky O-Line and bad skill position players. What exactly were they expecting him to do?

This feels like a clear signal that the Football Team and its new coaching staff is just done with Haskins, which is actually all the more reason to play him. Boost his stock, and trade him. Hell, the Cardinals got a 2 for Josh Rosen after he had already proven he stinks, but at least he got benched for Kyler Murray. Haskins is getting benched for sucky Kyle Allen, which is going to wreck Haskins' trade value.

Cardinals (-7) at Jets: You're not fooling me for the third straight week, Cardinals.

Jaguars at Texans (-6.5): It looks like the Bill O'Brien situation got really ugly in the last few days in Houston.

A source tells me that JJ Watt and Bill O’Brien had a heated exchange on the practice field the week of the Steelers game in which JJ called BOB out for his coaching ability. It began a player revolt that ended up getting BOB fired.

Giants at Cowboys (-9.5): If you're an Eagles fan, it's sort of a win-win to take the Cowboys in your survivor pool this week. If they win, you stay alive. If they lose, you can make fun of the Cowboys fan dork at work for his/her team losing to the worst team in the NFL.

Broncos at Patri*ts (-8): Cam Newton is unlikely to be cleared by Sunday, as noted here:

From NFL Now: #Patriots QB Cam Newton has not shown COVID-19 symptoms yet (as the CBS broadcast mentioned), but it's still a longshot for him to be cleared and play vs. the #Broncos. I'll explain 👇🏻👇🏻👇🏻 pic.twitter.com/Ei4yWT5E5N

Colts (-1.5) at Browns: The Colts and Browns are a pair of teams that played horribly Week 1, but have since turned things around. The Browns got boat-raced by the Ravens 38-6 Week 1, but have won three straight, including an impressive offensive performance against, well, the defensively-challenged Cowboys. The Colts, meanwhile, lost to the Jags Week 1 (bleh), but have since beaten the Vikings, Jets, and Bears, while holding them to a combined 39 points.

This is a sneaky-interesting game. I'll take the Colts, and their more proven defense.

Saints (-8.5) at Chargers: The Chargers have been in four one-score games so far this season, and it's not as if the Saints are rolling into L.A. looking like some sort of juggernaut. I'll gladly take 8.5 points.