Week 5 NFL picks: Rounding up the experts' predictions for Eagles vs. Steelers 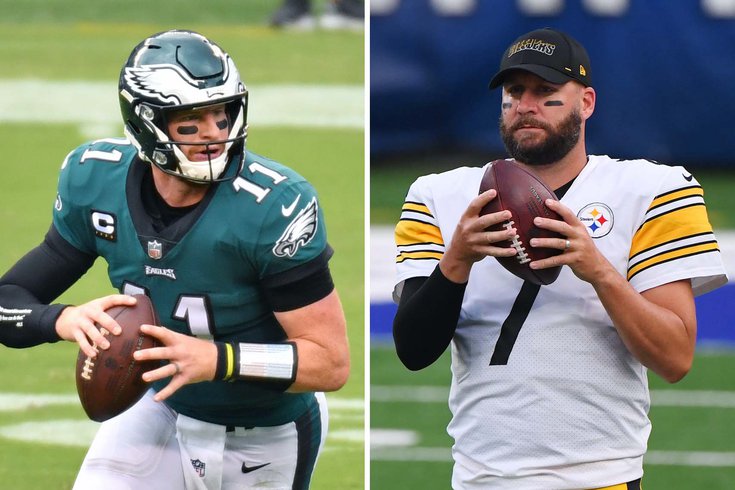 Despite their win over the 49ers last week, the Eagles enter their Week 5 matchup against the Steelers as seven-point underdogs, according to TheLines.com. It's a similar spread to the one the Birds faced against the 49ers, but had they not upset San Francisco last week, Philly would likely find themselves even bigger underdogs this week.

That's in large part due to the fact that the team the Eagles played a week ago was nearly as injured as they are, while the 3-0 Steelers team they'll face on Sunday is not only much healthier, but is coming off a mini bye week after last week's game against the Titans was postponed.

So, who will come away victorious in this battle for Pennsylvania supremacy? The picks from around the football world are overwhelmingly one-sided. But that was also the case last week, and we all saw how that worked out for everyone, including our own staff, who has essentially been the NFC East making predictions.

• PhillyVoice staff: If you're relying on our picks for anything, you shouldn't be, as we're a miserable 2-26 this season predicting Eagles games (and that's straight up, not against the spread). It's been bad, with two weeks in which all seven of our writers were wrong. That won't be the case this time around, as one rogue prognosticator is taking the Birds to upset the Steelers. Here's more from Evan Macy:

You would think that having a job covering the Eagles would provide me with some kind of insight into what the team will look like each week. But alas, I have none. I am 0-4 picking this season, which is the same number of wins as Jimmy Kempski has NFL completions. Not impressive.

So, I find myself in a win-win position. I am picking the Eagles this week. They have momentum, they are a little healthier, more confident and they have a chance to keep first in the NFC East. Steelers quarterback Ben Roethlisberger complained that the team’s surprise COVID bye week last week really only gave players three days off and then they had to quickly swap to preparing for the Eagles. I am going to go out on a limb and say there are going to be lingering effects, rust and mistakes made by the Steelers.

If I get this right, I have my first correct pick of the year. If I am wrong, my almost as impressive 0-5 record will carry on to next week. Win-win.

• Inquirer.com: All four of their writers are picking the Eagles to lose on Sunday, just like they did last week when they were all wrong — hey, I've already highlighted our own ineptitude so that should give me some latitude to criticize others. Here's more from EJ Smith, who sees a 27-21 win for the Steelers...

Whether this impromptu bye week ends up helping the Steelers or hurting them remains to be seen. Whether Pittsburgh is an undefeated team benefitting from an easy opening schedule or actually an elite group remains to be seen. What we do know is this will be one of the best defenses the Eagles will see this season, with the Baltimore Ravens next week being the only serious contender for that title. The Steelers have a better pass rush than the Washington Football Team, who gave the Eagles' offensive line fits. They have got a capable, opportunistic secondary led by safety Minkah Fitzpatrick. If Carson Wentz continues to struggle with accuracy, the Steelers will capitalize. [...]

All in all, I think the Eagles have a chance to win this game, but they’ll have to play their best game of the season to do so. I expect it to be close, but I’m not confident enough in this group yet to pencil them in for a tough road win.

• NJ.com staff: All six of their writers are picking the Steelers to beat the Eagles on Sunday. Here's how beat writer Mike Kaye sees it playing out at Heinz Field...

The Eagles earned a huge first win of the season against the 49ers, but can they keep it up? The Steelers are coming off a bye week and will host a game with actual fans in the stands. The Eagles have some juice left but this matchup seems daunting, especially with Ben Roethlisberger under center.

The Eagles will need to force at least two turnovers in this matchup to win, and history doesn’t favor that outcome. That said, Carson Wentz is likely to repeat his turnover woes with the Steelers' pass rush taking advantage of his banged-up offensive line.

• Bleeding Green Nation staff: Last week, for the first time in as long as I can remember, the BGN staff actually leaned more toward the Eagles' opponent with five of nine taking the 49ers. Of course, the Eagles wound up winning. This time, it's similarly split, but the Eagles are the one with the 5-4 advantage over the Steelers.

• ESPN staff: Just like in Week 4, not a single one of their 10 experts are picking the Eagles. But, hey, that seemed to work out for the Birds last time.

Pittsburgh is the wrong matchup for a Philadelphia team working through issues on the offensive line. After Stephon Tuitt's standout game in Week 3, the Steelers have a better chance of seeing multiple defensive players win battles on a given down than any team in football. They also blitz as well as anyone. Philly's deep, healthy and talented defensive line could give similar issues to Ben Roethlisberger. Carson Wentz is leaning on his legs more in recent weeks, which gives the Eagles hope for a long-term turnaround, but this is not a favorable draw for them.

• CBS Sports staff: All eight of their experts are picking against the Eagles, including Pete Prisco, who sees a 31-21 win for the Steelers on Sunday.

The Eagles got their first victory on the road last week, but that was against a decimated 49ers team. This Steelers team didn't play last week, so they are rested. Look for the Steelers defense to limit Carson Wentz as the Steelers stay undefeated.

The Eagles finally got a win on Sunday and are actually in first place in the NFC East, but I see them taking a beating in Pittsburgh.

• USA TODAY Sports staff: All seven of their writers are picking the Steelers to beat the Birds.

• SB Nation staff: Just three of their 10 experts think the Eagles will win on Sunday.

The Philadelphia Eagles are (barely) alive! They might be the NFL's most-injured team, quarterback Carson Wentz has been a mess with almost nobody to rely on, and they're only above water because the NFC East is terrible and they avoided losses against the rebuilding Bengals and equally banged-up San Francisco 49ers.

But it could be a very different story against a rested Pittsburgh Steelers team that has the defensive playmaking ability to exploit Philadelphia's badly damaged offensive line.

With that in mind, our whole crew is down with laying a touchdown with Pittsburgh for Sunday's battle of Pennsylvania. [...]

The Steelers are averaging a league-best five sacks per game, and they led the league in that category in 2019. With none of Philadelphia's regular offensive line starters fully healthy, that could be problematic.

• Sheil Kapadia, The Athletic: Each week, former Eagles beat writer Sheil Kapadia (now a national football writer for The Athletic) makes picks against the spread for every game. This week, he's not only picking the Steelers to beat the Eagles, but he thinks they'll cover the touchdown spread as well. [Note: He said the same thing about the 49ers last week.]

The buzz in Philadelphia has been about new left tackle Jordan Mailata. A seventh-round pick in 2018, Mailata (6-foot-8, 346 pounds) had never started a football game at any level before last week. The former Australian rugby player more than held his own in the Eagles’ win over the 49ers. Also, he can sing.

Mailata and the Eagles’ offense face a huge test this week against a Steelers team that has blitzed more (52.8 percent of the time) than any defense so far this season and is currently first in pass rush win rate. The Steelers should be well rested after having not played last week, and I’m not convinced the Eagles figured a lot out offensively, despite their first victory.

The Steelers and Eagles meet in a Keystone State rivalry, and it's going to come down to which team can protect the quarterback better. The teams have combined for 32 sacks this season. Pittsburgh takes advantage of the unplanned bye week — and the Eagles' turnover ratio — to improve to 4-0.

The Steelers are in first place in the tough AFC North at 3-0. The Eagles are in first place in the weak NFC East at 0-2-1. The Steelers got an unexpected bye and should be frustrated about not getting a chance to improve to 4-0. They will take it out defensively on Carson Wentz with their fully loaded pass rush and secondary against the Eagles' line and receiver limitations. The Eagles' defense will do its best against Ben Roethlisberger with pressure, but the Steelers simply have too many backs and receivers who can cause matchup issues. Pittsburgh is the much better Pennsylvania team and will prove it by turning Philadelphia into Keystone (State) Kops.