Eagles mailbag: Who had worse receivers in their first five years, Donovan McNabb or Carson Wentz?

Question from RKotite: Who had worse wide receivers to throw to in their first five years, Carson Wentz or Donovan McNabb?

In my opinion, Wentz had the worst wide receiving corps in the NFL both in 2016, and 2019, and there’s a good argument that they’re also currently the worst group in 2020, considering the injuries. They were also probably bottom quarter of the league in 2018, and easily bottom half of the league in 2017. The only time Wentz has ever had a decent pair of receivers was when he had Alshon Jeffery and DeSean Jackson for one game in 2019.

Of course, McNabb's receivers were near the bottom of the league in his first five years in the NFL as well. He had Torrance Small and Charles Johnson to throw to his first two years, followed by James Thrash and Todd Pinkston the next three years.

While Johnson and Small -- or Thrash and Pinkston -- weren’t good starters, Wentz would take those guys in half a heartbeat over guys like Dorial Green-Beckham or J.J. Arcega-Whiteside. Thrash and Pinkston in particular at least had some nice attributes. For example, Thrash was a good YAC guy, and Pinkston, for all his faults, did make his share of plays down the field.

Here’s a look at each individual season of the starting wide receivers each quarterback had in their first five years. First, McNabb's guys (McNabb only started 6 games in 1999):

And Wentz's guys (keeping in mind teams throw it a lot more now than they did then):

My conclusion? It's close! Wentz's receivers have been more talented, but none of them have been able to stay healthy. If I'm drafting a team, a bunch of the Wentz guys would be higher on my draft board than the McNabb guys, but if we're factoring in availability, I'm taking Thrash and Pinkston over half a season of the injury-prone Wentz starters and half a season of guys like Paul Turner.

Question from Scojos: How did K’Von Wallace look on further inspection?

I watched his snaps, and he mostly played in the base defense (when they had 3 LBs on the field). Marcus Epps played in nickel.

Wallace didn’t have a lot of action come his way, but when he did… eh.

We’ll need to see more, but he didn’t stand out in a positive way.

Question from greenwithenvy: Was that Joe Montana playing QB for the 49ers at the end of the 4th quarter?

Ha, after Mullens threw the awful pick-six to Alex Singleton, they benched him, and C.J. Beathard benefited from the Eagles' soft shell defense. I would have kept the heat on there if I were Jim Schwartz. It's a third-string QB! Don't make it easy on him.

Question from Mig: Why hasn't Howie traded for a LB yet? Tight ends are killing them. They need a cover LB who can take them away.

Schwartz's defenses have traditionally done a good job on opposing tight ends. In 2019 they gave up 65 catches for 681 yards and 4 TDs to tight ends. Only five defenses gave up fewer yards.

Malcolm Jenkins had a lot to do with the Eagles' success against tight ends, but he's not on the team anymore.

Question from Michael K: How much affect do you think we as fans have on the team’s willingness to have a rebuilding year?

Question from Hinkie: Jimmy there are a lot of storylines this season but I don't think enough attention is being paid to Nate Herbig not tucking his jersey in. Why? Is this an alpha move? Is he just superstitious? Is his stomach too big? The people need to know.

I think it suits him. And it's not just the untucked jersey. He also has the long, sweaty shirt flowing beneath his jersey. 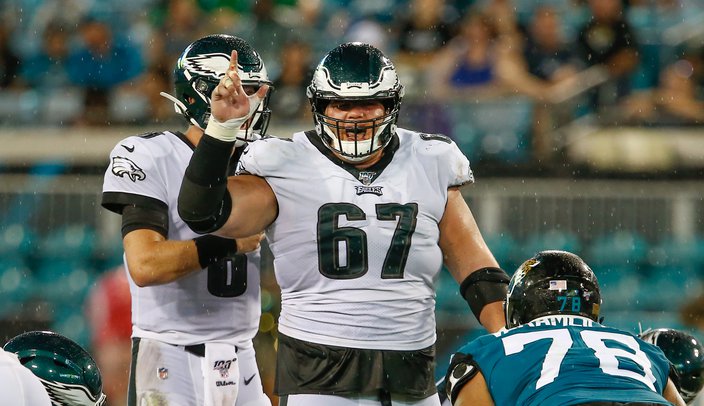 I'll have to find a way to ask him about his sense of style the next time he's one of our Zoom calls, without sounding like an idiot.

Question from RKotite: If you could redraft right now, are you still taking Jalen Reagor or going with Justin Jefferson instead?

I’m on record from May! Ha. I feel like we should all memorialize what we would have done in “hindsight draft” form immediately after each draft, and then you should have to show your own hindsight draft history whenever you complain about the team not drafting, say, DK Metcalf instead of J.J. Arcega-Whiteside, for example. Otherwise, you have to say, "I would have taken (fill in some other player that you had on your wish list), and they stink too."