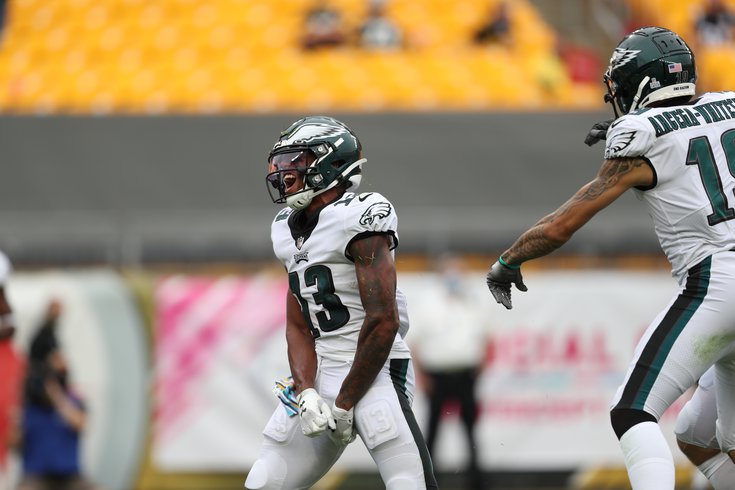 If someone told you, a month ago, that there'd be an article (or likely many) pondering whether Travis Fulgham was the real deal for the Eagles, you've have to open a new browser window and do a google search.

You probably still have to — especially after watching him break out in a big way for the Eagles in Pittsburgh.

A week after making a spectacular touchdown catch to put the Eagles ahead late in their lone win of the season in San Francisco last week, the practice squader caught 10 passes for 152 yards and a touchdown in the Birds' 38-29 loss to the Steelers in Week 5. His quick ascension from no-name to fantasy football waiver pickup (he had an impressive 26.3 points Sunday) is one of the few bright spots for an Eagles team tortured by injuries and looking at a potential top 10 draft pick in April.

"First of all, he's a beast," Carson Wentz said of his most popular target this week. "He showed up today, he showed up really last week, the two big plays he had. He's not a fluke, he's a baller... His number got called a lot more today because he was in the right position and he made some great plays."

"He had the hot hand today, but it's kind of the way it was flowing today. He made some great plays, he's a heck of a player and we're going to keep building on that."

Fulgham is already the Eagles leader in receiving yards this season with 209 (Greg Ward has 172). In Sunday's loss alone, he nearly matched fellow wideout JJ Arcega-Whiteside's numbers for his entire career.

And when you look at his combined stats from his two games with the Eagles — 12 catches, 209 yards and a pair of touchdowns — Fulgham is already ahead of the 2019 second-round pick across the board.

Is Fulgham just a flash in the pan? Or is he actually a piece the Eagles can build on and rely on? Will he still be catching passes when Jalen Reagor, DeSean Jackson and Alshon Jeffery are ready to return?

Wentz and Fulgham have the chemistry of two teammates who have been at it a long time. It's all-together remarkable that Wentz not only found him for 152 yards on Sunday, but the clutch spots from which he emerged with a reception were downright remarkable.

Late in the first half (before a meaningless bomb caught by JJ Arcega-Whiteside in bounds), Fulgham caught a 20-yard pass on third-and-17 to keep an important drive alive.

On their first touchdown drive of the second half, Fulgham caught a 31-yard reception to convert another third down.

And of course, he caught a fourth-down touchdown to get Philly within two points after trailing by as many as 17.

The 25-year-old is relatively new to football, having just picked it up when he was in high school after moving around the Middle East and Africa during his youth.

Fulgham was a sixth-round pick with the Lions a year ago where he appeared in three games with no targets and shuffled between the practice squad and active roster. He spent nine days with the Packers in August before he was waived and picked up by Philly. He's been cut or waived four times in two seasons.

The measurables aren't spectacular, nor is his pedigree eclipsing 500 yards only once in a season at Old Dominion, but he has noticeable concentration and catching ability when the ball is thrown his way. Catching balls from Wentz — who has been inaccurate this season to say the least — Fulgham brought in 10 of 13 targets. For contrast, Zach Ertz caught just one of six, and John Hightower two of six.

"We rely on all our guys not just one," Pederson said to media members after the game, "and you win as team and lose as team. He played well, he played tough, he made some big catches, some big third-down ones, it was really good to seem from him.

"He's one guy who can really help our offense, he had a good game today but we didn't do enough to win."

Fulgham holds himself to a high standard and is still thinking about those three incomplete passes he thinks he should have come down with. He's also regretting his impulsive decision to just chuck the ball from his second career NFL touchdown reception into the stands.

There is little doubt that in the short-term, Fulgham will be a part of the Philly offense. And if he continues to play like a big-boy, grown-up NFL wide receiver, he'll have a home with the Eagles. The rest is out of his control.

A lot will depend on the health of the Eagles currently injured wideouts. A lot will also depend on whether the Eagles are able to contend, at all in 2020, or if they will try and be sellers at the trade deadline and perhaps open more opportunities for young players like Fulgham. But, it seems like his two-game sample size against two pretty good NFL teams in the Niners and Steelers should at least guarantee Fulgham a roster spot and the use as a depth option going forward.

Or maybe he is the real deal, is Wentz' favorite target on the team and will be a name we remember for more than just the "Travis Fulgham Game."