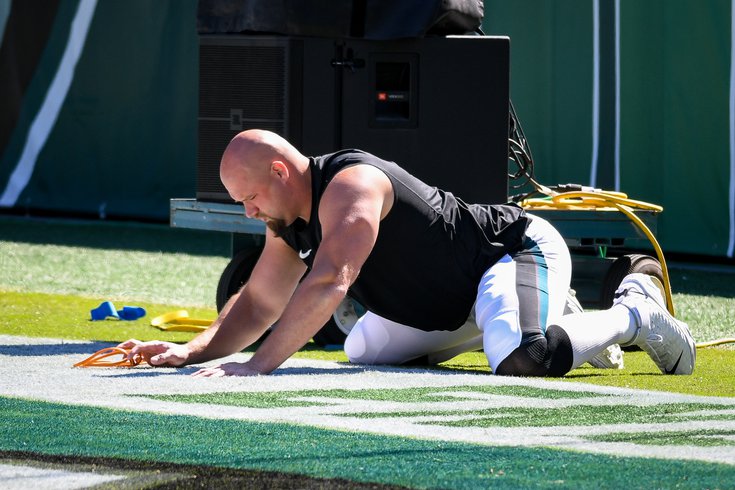 With the way this season has been going for the Eagles, Sunday's loss to the Steelers actually included some positives — like a lack of injuries, at least compared to what they've been dealing with in previous seasons. But it wasn't all good news on the injury front for the Birds.

On Monday, the day after the team's 38-29 defeat in Pittsburgh, head coach Doug Pederson provided some updates on his injured players, including Lane Johnson, Darius Slay and more.

This is the most concerning news of the day. And while much of Pederson's 20-minute session with the media was spent dissecting Chase Claypool's fourth touchdown of the game, this is the much bigger storyline for the Eagles.

Last week against the 49ers, Johnson was unable to finish the game due to a lingering ankle injury that required "tightrope surgery" this offseason. Then, last week, Johnson underwent another procedure to have a cyst drained, hoping that would provide the relief needed to allow him to get through a 60-minute game. Unfortunately, that was not the case against the Steelers, as Johnson left in the third quarter on a cart and never returned.

After back-to-back weeks in which he was unable to make it through the game, Johnson is getting a second opinion on his ankle, according to Pederson.

"In the case of Lane Johnson, medically, we're waiting on second opinion, so there are some reports still coming in on Lane so I don't any update yet with him," the coach said Monday.

What exactly that means — and specifically what the first opinion is — remains to be seen, but typically second opinions are required when there's something serious going on, or at least something that might need to be repaired surgically. Perhaps the Eagles are hoping for a second opinion that would confirm Johnson's ankle can be fixed with rest — or perhaps, they're waiting on confirmation that surgery is required.

Either way, this is worth keeping an eye on as the Eagles finished Sunday's game with just one projected offensive line starter in the game, Jason Kelce. In Johnson's place, rookie Jack Driscoll has been taking the snaps at right tackle and appears posed to continue in that role should Johnson's ankle keep him out for an extended period of time.

UPDATE [Tuesday, 3:55 p.m.] — Lane Johnson will reportedly not be having surgery on his ankle after getting a second opinion. There is still no word on what that means for his status on Sunday, but Doug Pederson is available to the media on Wednesday and you can bet he will be asked about the health of his starting right tackle.

#Eagles RT Lane Johnson gathered more opinions on his nagging ankle. Sources say it’s just a matter of trying to get some rest and fight his way through it. No talk of surgery, shutting him down or anything like that. We’ll see about his availability for Sunday vs the #Ravens.

The Eagles cornerback suffered a concussion against the Steelers and is in the protocol.

"Obviously, Darius Slay is in the concussion protocol right now," Pederson said, "so I obviously can't comment any further on that."

His status for Sunday's game against the Ravens is also worth monitoring as he has been one of the Eagles best defensive players this season (despite a down week against Pittsburgh).

The pair of veteran Eagles wideouts haven't done much on the field this season, with Alshon Jeffery still working his way back from season-ending foot surgery that cost him the second half of 2019 and DeSean nursing a hamstring injury that has kept him sidelined since the Bengals game.

Both players practiced a bit last week, and Jeffery looked like he might be nearing a return until an illness popped up and ended his chances of playing against the Steelers. Now, they'll look to ramp both players back up this week.

"We're hopeful that DeSean gets incorporated into practice this week. We're obviously hopeful that Alshon gets back out there this week," Pederson said. "And we've got to make sure that these two guys are healthy first, right, and make sure they're 100% heading into the game."

In their absence, the Eagles have seen some solid play from their backup wideouts, and not just last season's late surprise Greg Ward. It's actually been all about Travis Fulgham, who has caught 12 passes for 209 yards and two touchdowns in his two games with the Birds. Now, with the Eagles hopeful they'll get two veterans back in the fold, the question becomes about how Pederson does that without messing up any of the chemistry quarterback Carson Wentz has found with the Old Dominion product.

"But you're right, you're trying to build chemistry, to build a package of plays that these guys are comfortable with and also trying to bring back a couple of veteran players that could give your offense a boost," Pederson added. "We've got to see where they are first of all from a health standpoint.

"We're sitting here today on Monday and we're hopeful, but we're also realistic from the standpoint of the guys that are in the game have been playing well. Has it been perfect? No, it hasn't. But they're playing hard, they're playing fast, and there are things that we can coach and teach and continue to get better at with these young guys."

The Eagles linebacker left the game against the Steelers with an injury, but Pederson said he'll be fine for the Ravens game.

It may seem like a lot on the injury front, but comparatively, this isn't that bad. Of course, that second opinion on Lane Johnson could change all that...