John McMullen: Eagles offensive line is a house of cards, held together by Jeff Stoutland 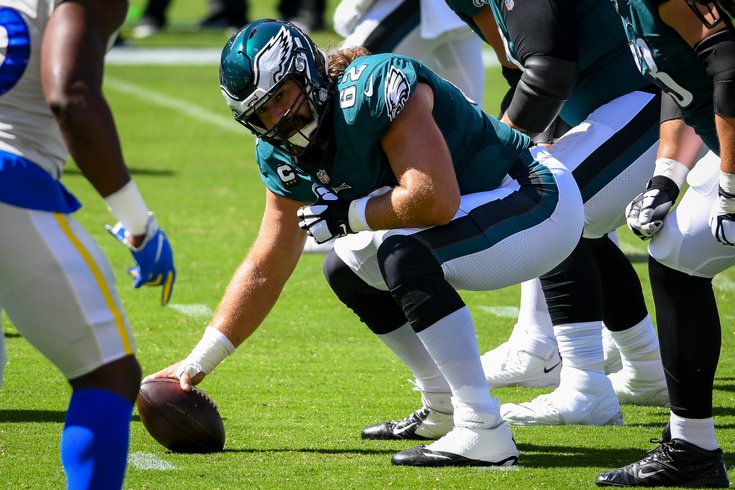 Eagles center Jason Kelce was the only projected O-line starter left on the field when the game ended on Sunday.

When Lane Johnson was carted to the locker room at the end of the third quarter during a 38-29 setback against the Pittsburgh Steelers Sunday, again stymied by a troublesome ankle patched together with the thinnest "tightrope" imaginable, Jeff Stoutland was down 80 percent of his projected offensive line with Jason Kelce serving as the last-man standing.

There's plenty of sexier topics than the offensive line to light up the talk-radio phone lines when it comes to Doug Pederson's offense. Maybe Carson Wentz's mechanics, the underachieving receivers not named Travis Fulgham, Zach Ertz's odd contract-fueled regression, or even the paper-thin depth behind Miles Sanders in the backfield.

When the foundation is crumbling on your house, however, the aesthetics seem a little less meaningful.

By the end of the day in Western Pennsylvania, Kelce was surrounded by four players who came into this season with a total of 82 regular-season snaps with 79 of those belonging to Matt Pryor, the player who has struggled the most while trying to lock down right guard as the No. 3 option.

The other three belonged to Nate Herbig, who has been perhaps the most pleasant surprise while toggling between right and left guard this season. The tackles who closed against the Steelers were Jordan Mailata, in his second somewhat competent pro start, and rookie Jack Driscoll, who again had to tag in for Johnson as the All-Pro tries to fight his way through an injury he probably shouldn't be playing with.

Even Kelce (hip) and Herbig (groin) are dealing with somewhat minor issues as well.

At this rate Sua Opeta, Luke Juriga, and Prince Tega Wanogho should be on DEFCON 1.

Regarded as one of the best offensive line coaches in the NFL, Stoutland had been rightfully lauded for putting together a serviceable product with the cards he's been dealt, but the veteran mentor is also weary from the attrition his room has suffered.

"The first thing I should've said when I sat down here is how much I miss Brandon Brooks, Isaac Seumalo, Jason Peters, Andre Dillard. Those are really good players, man," Stoutland said last week leading up to the Week 5 setback in Pittsburgh. "Those are good players, those are good guys in the locker room, in the meeting room and to have those guys not around is different to be honest with you."

Herbig has made the musical chairs a little easier to swallow while Pryor has now been downgraded to a right-handed player, making his short dalliance at left tackle in between Dillard's biceps injury and Peters' $1M extortion even more curious.

Pryor's inability to move from side to side is hardly a new phenomenon. Dillard went through the same thing as a rookie last season when asked to move to RT. Stoutland also brought up former starter Allen Barbre, who preferred only the left side.

“I've coached players here in the past. Al Barbre [Allen Barbre] was a left-side player," Stout explained. "When you moved him to the right side it was challenging for him from a balance standpoint. Some players are like that. For Nate, it was not any issue at all. So, I could put guys in a better position to make it — 'no man is an island, you must draw your strength from others' — to be able to make that move with Nate, it was better for all of us."

As for Mailata, he was caught on a speed rush by Bud Dupree late on Sunday but has held his own, and those projecting a disaster need to turn that page.

Even Stoutland was holding his breath with the 6-foot-8, 350-pound Mailata, however.

"I felt he was ready to go," Stoutland said. "What he would do in a game and how he would react when it came to game time, would he remember the little things that we train on every day? I keep telling him, ‘Rely on your training, rely on your training.’

"Many times, a young player goes into the game and then the game is over and they're like, ‘What did I just do? I didn't do anything that I was working on with my training.’ From that standpoint, I'm proud of him for that, but he still has a way to go and he still has a lot to learn. The one good thing is, he is a very unique individual. The guy can move his feet and change direction and so he's so big. It's hard to get around real big guys now."

Jim Schwartz will tell you that there is no grading on a curve in the NFL and Stoutland's own self-scout has a simple goal. And it isn’t serviceable or even competency, it’s progression.

"When I see a guy, like a young player like Luke Juriga who I see progressing every day, that means a lot to me. I really struggle and it frustrates me when we can't continually get a little bit better every day and just keep climbing and stacking days together."