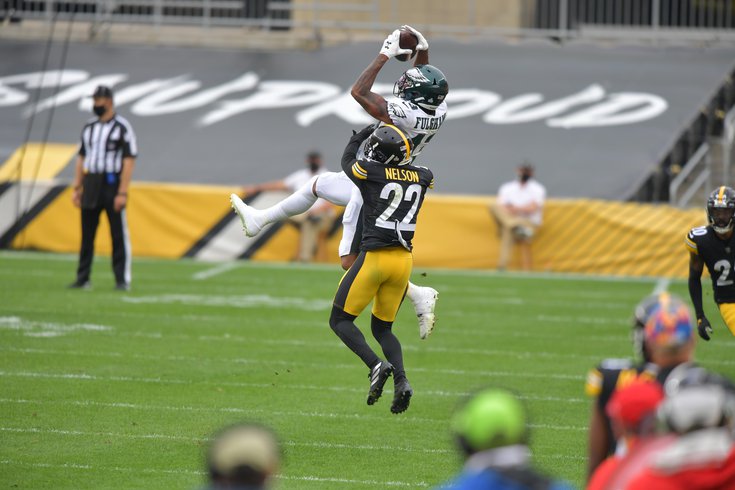 In their Week 5 loss to the Pittsburgh Steelers, the Birds lost the time of possession battle, as they played 59 snaps on offense, and 75 on defense. Let's just get right to the snap counts.

Analysis: This was the first time all season the Eagles went into two consecutive games with the same starting five along their offensive line. It didn't last long, as Johnson had to leave early, again. His ankle injury has been a recurring issue for a few years now, and it's fair to wonder if he'll have to deal with it the rest of his career.

Analysis: Sanders had the long 74-yard TD run, but was otherwise bottled up, as he only had 6 yards on his other 10 rushes. The Steelers played a lot of man defense, with LB Devin Bush matched up one-on-one on Sanders, and I thought the Eagles could have done more to take advantage.

• Hightower got open on a deep post that the Eagles weren't able to hit on, and he also had a ball go right through his arms in the back of the end zone at the end of the first half. The latter likely wouldn't have been a TD anyway had Hightower caught it, as he was unlikely to get both feet in, but, still.... catch it. On the day, Hightower had two catches for 18 yards on six targets, which isn't great, but he did at least show some ability to separate down the field.

• The story of the day on the "silver lining" front was Fulgham, obviously, as he had 10 catches for 152 and a TD on 13 targets. He fits in at the "X" position in the Eagles' offense, and it will be interesting to see if he loses snaps to Alshon Jeffery whenever Jeffery is ready to play. If the Eagles are trying to get Jeffery involved and show the league that he can still play, hoping to trade him for literally anything just to get him off their books, then there's some merit to that. But once the trade deadline comes and goes, it'll be hard to justify Jeffery eating away at Fulgham's snaps.

• Ward had his typical four catches for 26 yards. He did score.

• Watkins made his NFL debut, but wasn't targeted.

Update: As some readers pointed out, Watkins drew a pass interference penalty on a target his way. That play went down in the stat sheet as "no play," hence no targets on the stat sheet for Watkins. But yes, Watkins was indeed targeted on that play.

Analysis: The "trade Ertz" crowd is growing with each game the Eagles play and Ertz isn't a factor. As we noted in our 10 awards post, he has 15 yards on 11 targets the last two weeks, and as such, his value has probably been hurt a bit on the trade market. Still, from here on out, his value probably won't ever be higher than it will be at the trade deadline this season.

Analysis: After consecutive dominant performances against the Bengals and Niners, the Eagles' D-line only got to Ben Roethlisberger for one sack and 2 QB hits. That was a missed opportunity against a Steelers line that was missing their starting RT and their perennial Pro Bowl RG.

Analysis: Generally speaking, I think the Eagles are right that the defensive line and the secondary should be prioritized over linebacker, but they have gone so far in that direction that the current linebackers on this team, T.J. Edwards aside, are replacement-level players. Their thinking previously was that when linebackers make mistakes, it might be an eight yard run as opposed to a three yard run. Well, this year we're seeing linebacker mistakes resulting in the biggest, back-breaking plays in Eagles losses.

It's time to put some actual resources into the position.

Analysis: Slay left early and didn't return, but the feeling is that he'll be OK. He's been excellent on the field this season, and McLeod has played well, too. The rest of this group? Not as much.