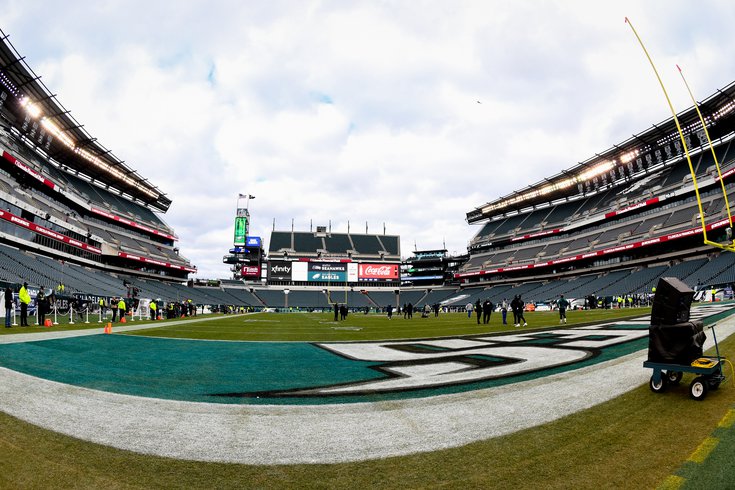 Stadium shot before the Philadelphia Eagles wild card game against the Seattle Seahawks at Lincoln Financial Field in Philadelphia on January 5, 2020. (Kate Frese/PhillyVoice)

If you are hoping the NFL is able to play all 16 games this season without a hitch — at least as things are currently planned — it's time to temper expectations.

There are two differing models of pro sports that seem to be emerging. One, the bubble, looks to be an almost flawless orchestration when properly executed. The NBA has already successfully began its restart with no active COVID-19 cases and the NHL will follow suit this weekend. The MLS had a few hiccups early on but have righted the ship, and women's pro soccer had a perfect tournament recently.

The second model is the MLB's plan — to limit travel and to implement clubhouse protocols but to essentially have a semi-normal, fan-less (and shortened) season — has some problems.

The Marlins are still quarantined in Philadelphia after they had 17 (now 18) positive tests following a series win over the Phillies, who are also waiting to be cleared to play after seeing two of their series' postponed after a coach and clubhouse attendant tested positive Thursday. The schedule is in disarray and the Cardinals also are dealing with a positive test, according to recent reports.

A seemingly unforeseen problem is the delay in the MLB receiving positive tests, and the typical 14-day period the CDC recommends for people who have been exposed to coronavirus to self-quarantine to stop the spread. The Phillies were potentially exposed on Sunday, and testing negative even four days removed means virtually nothing.

The NFL has more players, more teams, and more complicated logistics. With players trusted to go home every night and to take care of themselves, how could the football season possibly work without players, and then entire teams testing positive, leading to cancelled games and a mess of a season?

Well, there is a solution and it involves tinkering a bit with the 2020 NFL schedule.

The NFL is going to have to come to grips with the idea that 16 games aren't happening. If an outbreak occurs, say, in the Eagles locker room in Week 2, that is potentially two cancelled games right there as they work their way back to testing negative and limiting their contagiousness (and possibly more due to contact tracing).

But, if the NFL shortens its season to, say 12 games and adds a bunch of bye weeks, it can work.

In the above scenario, the Eagles would be forced to skip their Week 2 and Week 3 games as part of the 14-day quarantine. But in the 12 game model, they wouldn't miss any games.

The NFL would add bye weeks after every fourth game, perhaps staggering it into two different blocks of teams based on scheduling. So, bye weeks on Weeks 4, 8, 12 and 16 for the one half and Weeks 3, 7, 11 and 15 for the other (with obvious crossovers when necessary). The Eagles would be able to make up their Week 2 and 3 games during Week 4 and 8 bye weeks respectively.

Football, with so much time in between games, has an opportunity to actually provide a safe passage of time between contact for its positive testing players. The Marlins, for example, will potentially miss 14 games over two weeks. An infected NFL team would only miss two — and under the expanded bye week plan, those could easily be made up.

Watching what is happening in Major League Baseball is terrifying, and NFL executives would be stupid not to try and learn from it. A perfect case study is literally unfolding right in front of our eyes.

If the NFL is not comfortable bubbling their players for six months — which is a reasonable thing to not be comfortable with — they need to add assurances that the season will be able to succeed. There are currently no schedule safeguards, and no contingency plans aside from socially distancing, wearing masks and keeping infected players out of team facilities.

Yes, there is a boatload of money that could be lost by having just 12 games. But it's a lot better than falling into chaos and embarrassment like baseball currently is.

Watch and learn NFL. We need you to be smarter than you've ever been before.