Report: Eagles WR Marquise Goodwin opts out of 2020 season due to COVID-19 concerns 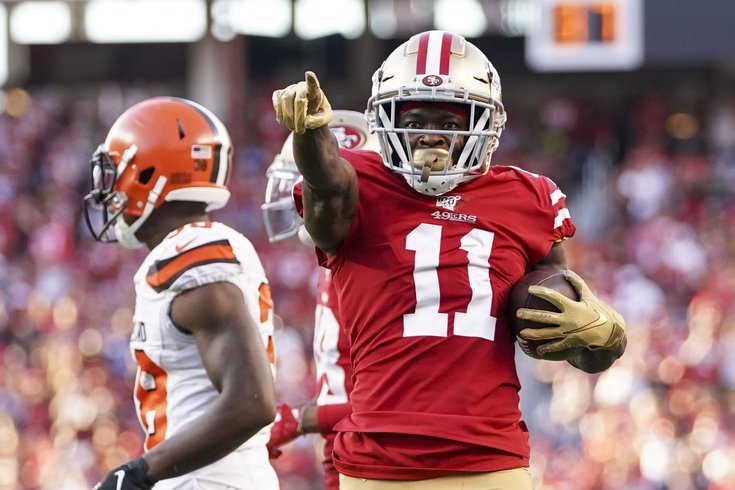 According to Ian Rapoport of NFL Network, Philadelphia Eagles WR Marquise Goodwin has decided to opt out of the 2020 season, due to COVID concerns, centering around his family.

Source: #Eagles speedy WR Marquise Goodwin plans to opt-out for the 2020 season due to COVID-19 concerns. He has informed the team, who traded for him during the draft. Goodwin has a 5-month daughter after his wife previously had three miscarriages. Family is the most important.

Our Evan Macy wrote about Goodwin's dedication to family back in June.

As far as Goodwin's impact on the 2020 season goes, the Eagles will lose some depth, but their trade for him during the 2020 draft was something of a flier.

Goodwin had his best season in 2017, when he caught 56 passes for 962 yards and 2 TDs. His career yards per catch average is 16.6. The cost to acquire him wasn't much. Basically the Eagles swapped sixth round picks with the Niners, moving back 19 spots, and then they were able to get him to agree to lower his salary from $3,950,000 to $1,350,000 (with the potential for incentives), per Mike Kaye of NJ.com. (To note, PhillyVoice has confirmed Kaye's report that Goodwin and the Eagles did indeed agree to a re-done deal, despite salary cap sites such as OverTheCap.com and Spotrac not having updated his financials, since the new deal hadn't officially been signed yet due to COVID travel restrictions.)

Since 2017, Goodwin's career has been derailed by injuries. He began each of the last two seasons as a starter, but did not finish as one, missing 12 games along the way.

Niners head coach Kyle Shanahan described knee and ankle injuries that Goodwin suffered as "chronic," when they placed him on IR in December of last season. So that's not good.

But even more alarming is Goodwin's history of head injuries. In the sixth game of the season in 2019, his last as a starter, Goodwin was knocked out of the game on the following hit, and he sat out of the Niners' next two games. (You'll see him taking a shot while running a crosser from the left side of the formation to the right, and then remaining face down on the field.)

Goodwin had previously suffered five concussions in a 17-month span in 2016 and 2017, as compiled by SportsInjuryPredictor.com.

The concussion that occurred in Week 17 in 2017 was a scary one.

After that five-concussion run, Goodwin has not been able to find the same level of success that he had in his breakout season in 2017, and his days as a starting NFL receiver are very likely over.

However, he did make some sense in something of a "DeSean Jackson short-term insurance" role. Instead, the Eagles will be forced to rely on their three rookie draft picks — Jalen Reagor, John Hightower, and Quez Watkins — to provide a deep threat element to the offense should Jackson become unavailable.