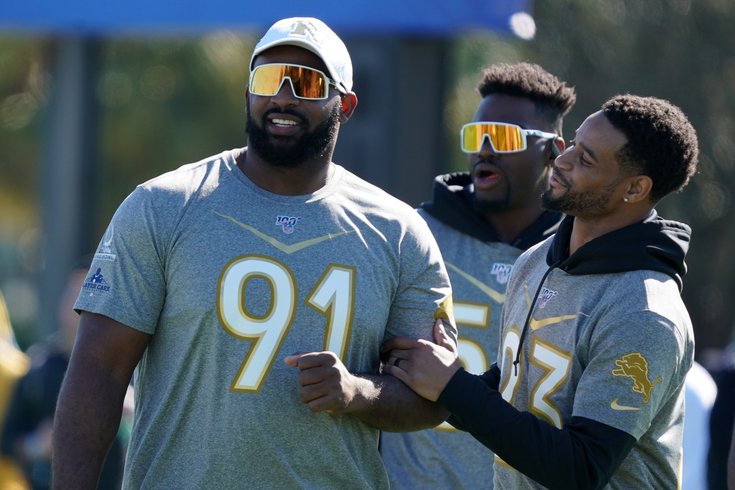 Yes, the NFL's Top 100 list is dumb. San Francisco 49ers quarterback Jimmy Garoppolo couldn't hold Carson Wentz's jock, and Garoppolo is ranked 43rd overall, while Wentz couldn't even crack the top 100. In reality, if the NFL did a re-draft of the entire league, Wentz would almost certainly go top 10. (Personally, I'd have him top 5.)

Of course, Lane Johnson has a legitimate beef for getting snubbed as well, but really, who cares? Near the end of the season each year, some NFL reps come into locker rooms, and hand out sheets of paper where players can fill in their top 10 players. If I recall correctly, the Eagles barely even had anyone in the locker room the day they did it last year. It's such a lazy way to conduct a poll for something they put so much time into, production- and promotion-wise.

Anyway, if you can look past the silly way in which the NFL compiles the top 100 list, the video productions of each player are actually quite good, as you get to hear teammates and opponents give their insights into the players who made the list. And so, we transcribed their words on the five Eagles who did make it.

"I love running to that right side."

"Probably one of the top guys at his position in the league. Can move really well for being as big as he is."

"He kind of seems to sit all kinds of pass rush moves down."

"Brandon, he's special, man, and it showed a lot this year. He's a hell of a player and I love playing with him."

"Another person who I feel like is obviously – he’s known for being talented, but Kelce, the center for the Eagles – he’s the fastest center I’ve ever played against."

"Jason Kelce is just one of those dudes who might not be the most big guy, but he plays like a big dude. He’s stout, and his speed is remarkable."

"There are some plays where it’ll be like a screen play or hitch or something to the receiver past the numbers, and you’ll see him running out there to block. You know when a center is that fast because I feel like the center sometimes, they’re in the middle of everything so they don’t really reach or get to people, or they’re easy to get bumped, so when a center is blocking you, especially me, you kinda notice him. Where’s he coming from?"

"His ability to get out on the second level and kind of position himself, understanding where the play is heading, how the play is supposed to bounce out, how it can unfold, and positioning himself to really let those guys take care of business, and he’s been doing it for a long time.

"I think the big thing you can describe about Jason is that he makes it look effortless. Sometimes there can be difficult blocks and it can be frustrating as another center to watch it. The guy has a whole full head of steam and he gets his hands and anchors down, and that’s where the battle stops. That’s just the toughness that he brings to the game, and from what I hear he’s just the ultimate leader in that Eagles locker room."

"Darius Slay, man, I love, love, love his game. I mean this guy gets his hands on the ball like nobody else. How good he is in press and how he can play off coverage, he's one of the best in the league and he's been doing it at a high level ever since he's been here."

"I respect guys that play to my style. I think Slay plays my style more than a lot of guys. He's going up against the number one guy each and every week no matter where he lines up."

"He's one of those guys who is pretty much always going to be in the right position. I think he's a little bit different from some corners in that he doesn't have the great size. I would put him in the top tier when it comes to just pure athleticism. He's fast, he's quick, he can break, he has good ball skills. "

"He's just special. He's one of those guys, that for me as a rookie, finding that one vet that I just want to mimic, or just see what he does throughout the week to get ready, and he's one of those guys that I like. He catches 100 balls before practice and 100 after, and he does it every day."

"I covered him every time we played them. Every time. I ain't going to say I like it. He's one of the better guys in this game... The one thing that he's really good at is he makes everything look the same. The first couple steps is going to make you think he's going 10-15 yards down the field, and then he'll break it off. He understands where you need to be, and he understands where he needs to be."

"I don't really watch the other offense play as much, but I have to take advantage of watching Zach work. He's talented."

"He's got a crafty way of getting open. He's tough to guard. He doesn't have to be wide open all the time. If it's anywhere close to him, anywhere in his catch radius, he's going to get it."

" I call him 'automatic.' He's going to catch it no matter where it's at."

"He's tough. He stayed in the game (after breaking ribs and lacerating a kidney). He wanted to play the next week but the doctor shut him down."

"When the game's on the line, the ball is going to him, and you know it. But the thing is you got to stop it."

"He just terrorizes offensive strategies. He just makes it hard to run whatever your scheme was for that day. He's going to give you a hard time running them. The first thing about Fletcher Cox is that people underestimate his size. He's really one of the larger defensive tackles in this league. He matches that size and strength with his quickness. He's able to get off the rock super fast with his quickness, and work whatever type of move he has to disrupt offenses."

"To be so big and to be so quick, and so agile, and to be powerful is unfair... You instill in your offensive linemen all week, 'Hey, make sure you account for this guy.' You can't stop him. You can only slow him down.""

"He's one of those guys that just has a unique mixture of size and speed and explosiveness, and he's just hard to deal with."

"He's one of those guys that just messes up everything, no matter if it's a run or a pass play. He's going to be in that backfield. He lives back there."

"On one-on-one, he's hard enough, but then once they start working in games and stunts and stuff like that, he's a pain, for sure. You have to anchor down, and get help when you can."

"You try to limit the one-on-one matchups as much as possible, put your hands on him as quick as possible, because if he gets a full head of steam it's going to be a tough go. Talk about a guy that you definitely have to game plan for, put bodies on him, as many bodies as possible, because if you don't he can really change the outcome of a game. He was a force when we played them this year."

"He just takes up double teams, takes up space. He's a big reason why that line is always getting pressures."