John McMullen: For 2020 Eagles, everyone needs a back up — not just players 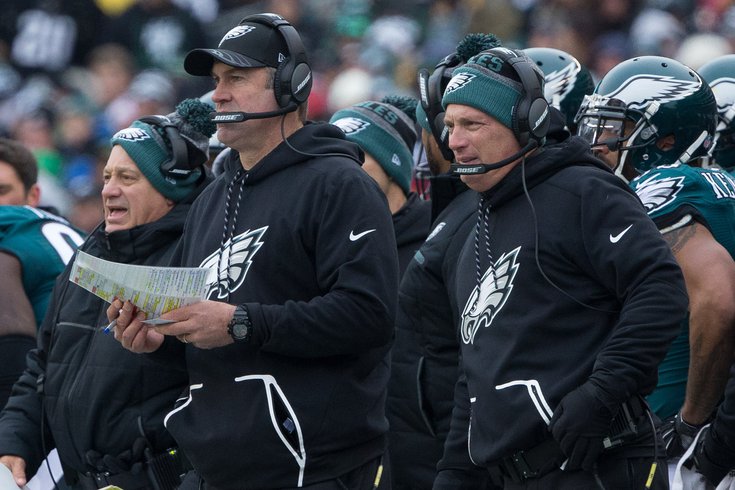 Call it a giant stress test.

The 2020 NFL season isn't going to be like the government putting a bank through the paces or your doctor placing you on the treadmill, though. The campaign itself is likely going to serve as a referendum on good organizations vs. bad ones.

Some of the more astute in the reading audience might want to point out every season is about that, at least to a point, an-almost Darwinian survival of the fittest. That sentiment might even be true but in a more typical environment, talent can overcome a lot of other deficiencies and even up the playing field rapidly.

In theory, you could have run-of-the-mill executives, a middling coach, and holes up and down the roster but if the GM hit on a quarterback at some point, you have a good opportunity to win on most Sundays. See the Green Bay Packers over recent seasons for proof of that thesis.

It's conceivable that holds up as normal in 2020 but there are going to be 1,000 other variables thrown into the mix that could expose any organization in both positive and negative ways.

As a team beset by injuries for three consecutive seasons, you've heard Eagles coach Doug Pederson roll out the cliche "next man up" a time or two, so much so that Wile E. Coyote might want to dub it a "Super Cliche."

With the opt-out date rapidly approaching and positive COVID-19 tests surely to be unveiled, many coaches will be talking about that next man needing to step into a potential role. That's the easy and obvious stuff.

"There is going to be more guys missing games than in the entire history of the NFL," All-Pro center Jason Kelce surmised when talking with the Philadelphia Inquirer.

The difference this time is "next man up" applies to the whole organization.

Heck, if the head coach himself tests positive for COVID-19 and can't be on the sideline for a particular game day, the contingency has got to be in place.

Any positive test and you’re out with no exemptions. At least five days if you’re asymptomatic or a minimum of 10 days if you exhibit symptoms.

Virtual work can go on during the week but it's not like a head coach could go up to the press box and work from there if he isn't feeling well. The same goes for the assistants all the way down to the Tier 1 and Tier 2 support staff, be it trainers, team medical personnel, and even team cooks. Everyone needs a backup, not just Carson Wentz, Kelce, and Co.

The Eagles have a defensive coordinator with head coaching experience in Jim Schwartz and two position coaches with recent experience as DCs in Matt Burke and Marquand Manuel. Burke's expertise was linebackers before he came to Philadelphia so you have some cross-training ability on that side of the football.

The trend in the NFL in recent seasons when needing a short-term fill-in for the top of the food chain has been the special teams coach because that's the only other mentor who interacts with the whole team, something that would put Dave Fipp firmly in the mix for emergency duty. Of course, who would fill in for Fipp on STs if he is unavailable?

On offense, there is a host of Pederson play-calling alternatives starting with former Denver offensive coordinator Rich Scangarello followed by the fast-rising Press Taylor, who as already raced from assistant QB coach to passing game coordinator in two years. Marty Mornhinweg, another former head coach, and long-time OC, is also back as a senior offensive assistant, and Duce Staley technically remains the "assistant head coach."

Few typically think about head trainer Jerome Reid or someone like game-management guru Ryan Pagnetti, who is in Pederson's ear during those fourth-down, challenge and timeout decisions. How about the advanced scouts getting you ready for opponents down the line? All these questions need answers in the form of clearly-defined flow charts and emergency options.

You know certain teams will play this by ear with crossed fingers hoping the rainy day never arrives. Conversely, the Eagles have a well-earned reputation of being one of the better organizations in the NFL.

If that holds true, while you're focusing on the X's and O's and whether Jalen Reagor can stretch the field horizontally or Derek Barnett can finally turn into that double-digit sack guy, Philadelphia will not only be socially distancing itself behind the scenes, it will be methodically moving away from the pack with its preparation while building the foundation for any success.

Now you can listen anywhere at any time on YouTube, Apple Podcastsnd Spotify.