Eagles cut a bunch of guys 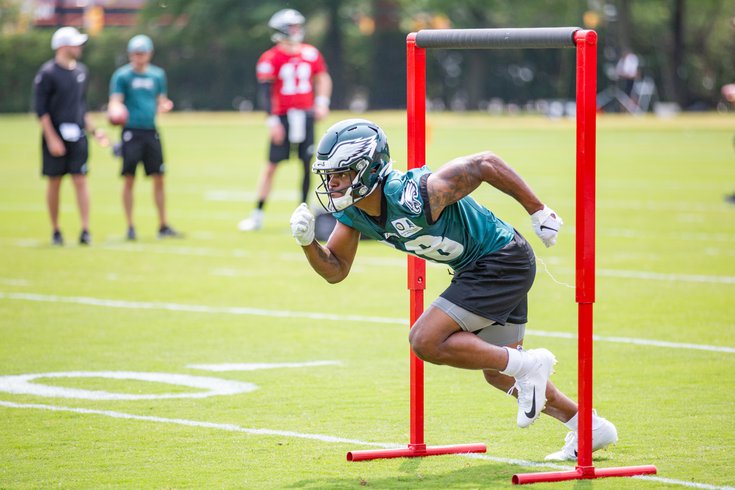 Shelton Gibson at an Eagles OTA.

Needing to trim their roster to 80 players before they begin practicing, the Philadelphia Eagles wasted little time, announcing that they have waived five players. They are as follows:

• WR Shelton Gibson: Gibson did not pan out as a fifth-round pick in 2017 as a deep threat in the Eagles' offense. He's been on and off the Eagles' roster, mainly as the gunner on the punt team. He did actually make a big play in the playoff game against the Seahawks, when he drew a 39-yard pass interference call that at least put the Eagles in position to tie the game late, but selections of John Hightower and Quez Watkins in the 2020 draft all but sealed his release.

• WR Marcus Green: Green was a drafted player in 2019 (sixth round, Falcons) who Atlanta waived at 53-man cutdowns. The Eagles snatched him up, and he spent the entirety of the season on their practice squad. He's a little guy (5'8, 191) with some return ability (five return TDs in college).

• DE Daeshon Hall: In an extremely unfortunate turn of events, Hall tore his ACL on the final play of the regular season against the Giants, because Pat Shurmur was calling timeouts in a completely meaningless game (to them) that was totally out of reach. The Eagles could have placed Hall on the PUP list, but instead opted to simply cut him.

(To note, Hall would still count toward the 90-man roster during training camp if he were on the PUP list. He would not count the 53-man roster if he remained on PUP into the regular season.)

• DT Albert Huggins: Huggins played in 3 games for the Eagles last season, and he had 3 tackles. He failed to provide any obvious opportunities to make a hug pun.

• CB Tremon Smith: Smith was a sixth-round draft pick of the Chiefs in 2018, where he played in 14 games as a rookie, starting one. He was also the Chiefs' primary kick returner, and the Chiefs even tinkered with him at running back. They cut him the following season, and he was on and off the Packers' roster throughout the season in 2019, before the Eagles signed him to their practice squad in December.

By my count, the Eagles' roster stands at 82 (plus DE Matt Leo, a roster-exempt player). Two more cuts to go.