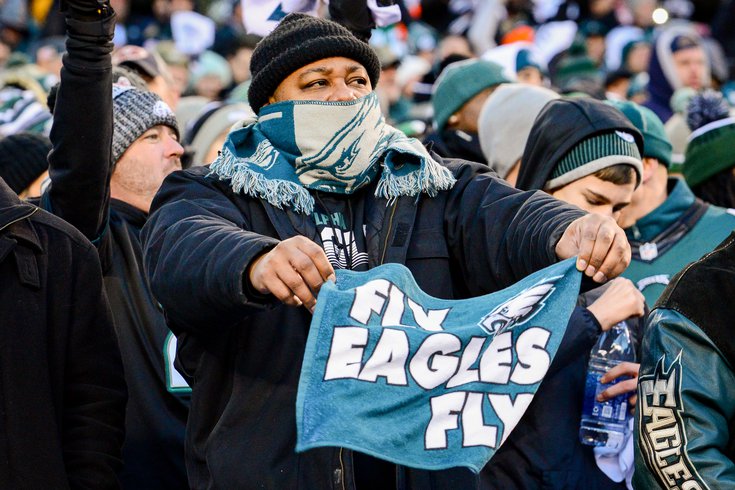 Eagles fans during the team's wild-card loss to Seattle.

If Eagles fans are given the green light to attend games this season at Lincoln Financial Field, face masks will be required.

The NFL’s head of communications, Brian McCarthy, took to Twitter on Wednesday to confirm that the league’s fans must wear face coverings if stadiums open up to the public.

McCarthy confirmed the policy by taking a picture of himself with a face mask on.

For those wondering, yes, it is league-wide: fans at NFL games this season will be required to wear face coverings pic.twitter.com/D139KGKQ4r

According to an email obtained by SportsRadio 94WIP, the Eagles informed 2020 season ticket holders of the NFL’s league-wide mandate on face coverings at games if fans are permitted to attend.

Capacity will be limited and social distancing will be implemented in the seats and throughout Lincoln Financial Field, according to the email. It’s unclear at this point what the capacity limit would be if fans are allowed to attend games in South Philly this fall.

This is the latest decision made by the NFL as the league prepares for training camps to open ahead of the 2020 regular season amid the COVID-19 pandemic.

The league and the NFLPA have reportedly agreed to play zero preseason games this August in order to keep players and coaches healthy and safe from contracting the virus, as well as to preserve their hopes of starting the regular season on time.

The NFL, however, has not instituted a league-wide policy on allowing fans at games and reopening football stadiums to the general public. Instead, the league has left the decision up to state and local governments, as well as to individual teams.

Last week, city officials banned all large gatherings in Philadelphia for seven months and said that fans would not be allowed to attend Eagles games this fall. Philly Health Commissioner Dr. Thomas Farley said that he and other officials had been in contact with the Eagles and communicated the city's expectation that there would be no fans at games. That would include tailgating outside the stadium.

However, just one day later, city officials walked back their previous statements and said that fans could be permitted to attend games at the Linc if the situation regarding the coronavirus crisis improves.

Current health guidelines prohibit outdoor gatherings of more than 50 people across the city, but that may change by September.

The Eagles’ home opener is scheduled for Sunday, September 20 against the Los Angeles Rams.

The U.S. Centers for Disease Control recommends everyone wear face masks when outside their homes. The masks do not protect the person who wears them; rather, they prevent sick individuals — including those who do not have symptoms — from spreading the coronavirus.