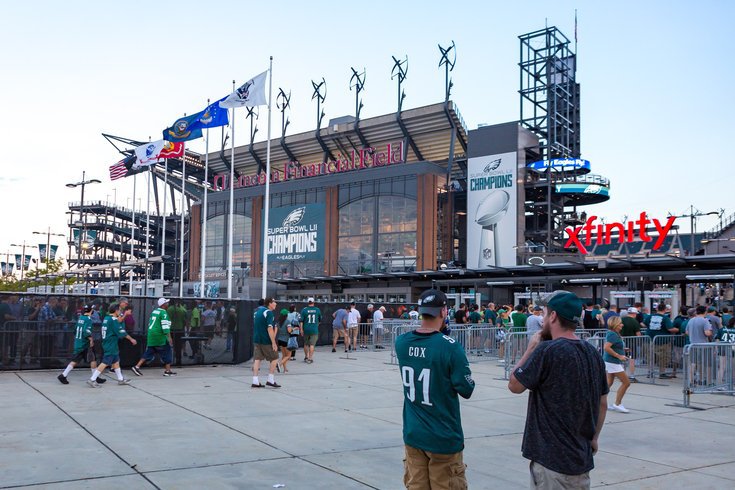 It remains unclear whether Eagles fans will be able to attend games at Lincoln Financial Field for the 2020 NFL season, which is still being planned amid the coronavirus pandemic. Current health guidelines prohibit outdoor gatherings of more than 50 people, but that may change by September.

Eagles fans may be permitted to attend games at Lincoln Financial Field in 2020 after all.

A lot will need to improve in order to make that happen, but Philadelphia officials issued a clarification on Wednesday after they had strongly suggested the city would prohibit spectators at the Linc.

"Specifically, with regards to the 2020 NFL season, the Eagles and the City of Philadelphia remain in close communication," the Mayor's Office said in a statement Wednesday. "Both entities are committed to the health and safety of the players, employees, fans and community. The city and the Eagles have been working together during this time and will continue to do so. The Eagles have been planning for a variety of scenarios in accordance with league protocols, as well as local and state guidelines."

On Tuesday, the city banned all large, permitted public events in Philadelphia until the end of February. There are some exceptions possible for private venues, if COVID-19 health guidelines are updated.

Philadelphia Health Commissioner Dr. Thomas Farley said Tuesday that the team's plan for playing games looked viable, but he does not believe fans should be in the stands or tailgating outside the stadium. He said the city had communicated an expectation to the Eagles that there will be no fans.

"I do not think that they can have spectators at those games," Farley said. "There’s no way for them to be safe having a crowd there. I can’t say what the plans are for the league, but from a safety perspective, they can play games, but not (have) crowds.”

Teams in the three other major professional sports, including the Phillies, will not be playing games with fans when their seasons begin or restart.

The NFL has steadfastly maintained that it would like to hold its season as planned with fans at stadiums, even if it means reduced capacity. It issued a statement earlier Wednesday addressing the news from Philadelphia.

#NFL statement on Philly city officials saying no fans at @LFFStadium this season: "We are gathering information on Philadelphia. Regardless, there is no impact on other stadiums. Decisions on the number of fans at stadiums will be determined on a market-by-market basis...

Other teams are beginning to announce plans intended for reduced capacity.

The New England Patriots have announced that they aim to admit 20% capacity at Gillette Stadium in the fall "pending state and local approval."

That's the operative phrase that will guide decisions in Philadelphia, too. The Eagles will have some say in putting together a plan to ensure maximum safety, but the city will have a strong say in the matter as it continues to respond to the COVID-19 crisis.

The public events moratorium announced yesterday was specific to those requiring a permit—like festivals and parades. Sporting events will be determined by the team and City based on current guidance as COVID-19 evolves. The Eagles will continue to communicate directly with fans.

Critics of fan attendance have pointed to concerns about chokepoints at ticket gates, restrooms and concession stands, among other issues.

Preliminary protocols outlined in the Patriots' plan would require face coverings, six feet of distance between ticket holders, and blocks of seats arranged with 10 or fewer people. The team acknoweldged "there is still much to be decided" before anything can be confirmed.

In Florida, which has become an epicenter of the coronavirus pandemic, the Jacksonville Jaguars have announced that they intend to have 25% capacity at TIAA Bank Field. The Baltimore Ravens also indicated they plan to have fewer than 14,000 fans at home games at M&T Bank Stadium.

While Philadelphia has avoided the massive surge in coronavirus cases seen in other parts of the country, more than two months remain before the Eagles' home opener against the Los Angeles Rams on Sept. 20.

The Eagles, who have deferred season ticket payments, will continue to provide updates to season ticket holders and fans on the team's plans for the 2020 season.

"This is a fluid situation, and this policy is under constant review," the city's statement said. "Discussions between the city and the Eagles are ongoing."