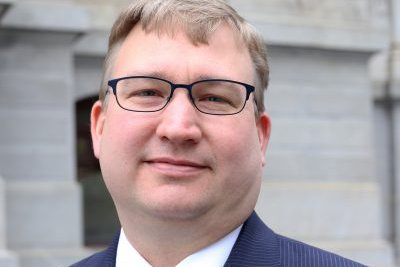 Brian Abernathy began serving as Philadelphia Managing Director in January 2019, assuming major responsibilities in the city's COVID-19 response. He announced his resignation amid criticism over his handling of the police response to civil unrest in Philadelphia.

Philadelphia Managing Director Brian Abernathy, second-in-command to Mayor Jim Kenney, will step down from his role in early September. The decision, announced Tuesday, came amid mounting calls for his resignation.

Abernathy has been front-and-center in Philadelphia's response to the coronavirus pandemic and the civil unrest that swept across the city in June.

Over the past few months, Abernathy faced growing criticism for his handling of issues such as homeless services and policing, both of which have fallen more directly under his charge during the COVID-19 crisis.

The Managing Director's Office, which has oversight of the city's operating departments, is organized around five cabinets: community and culture, community services, health and human services, public safety, and transportation and infrastructure sustainability. The next-in-command behind Abernathy is First Deputy Managing Director Tumar Alexander.

In a statement, Abernathy said the weight of the circumstances, from the pandemic to the economic crisis and rising murder rate, became too great of a strain on his personal life.

"Throughout these months, there have been too many nights and weekends where my daughters have wondered where I was, and I’ve placed too many burdens on my wife’s shoulders," Abernathy said. "I love my job and my city and have made these sacrifices willingly, but 2020 has taken a toll on my family, on my mind, on my body and on my soul."

A report from WHYY on Tuesday cited sources close to the mayor who said Abernathy's resignation stems from concerns over his ability to lead the comprehensive police reform planned in the wake of June's protests.

Earlier this year, protesters gathered outside Abernathy's home, angered at the city's response to unsheltered individuals during the pandemic. Abernathy faced further scrutiny after activists said he sent a Philadelphia Police Department counterterrorism unit to their door.

Kenney defended Abernathy in a statement on Tuesday and denied speculation that the decision was tied to any events of the last month.

"I’ve worked closely with many public servants throughout my career and few match Brian’s level of integrity and commitment to making our city better," Kenney said. "I particularly thank him for his tireless dedication while managing multiple unprecedented crises in the past four months. I will miss his counsel and measured leadership, and I wish him well on all of his future pursuits."

Abernathy seemed to acknowledge he may have been out of his depth when it came to addressing the concerns of Black Lives Matter and protests against police brutality.

"As Philadelphia shapes its future, our city must face the demons of inequity, poverty and racism," Abernathy said. "All voices must be heard — the status quo is no longer acceptable. Progress will not be possible until everyone understands the meaning of Black Lives Matter. To truly tackle these demands, different voices are required at every level of government. So with humility, a deep love for my city and enormous appreciation to my colleagues, I am resigning effective Sept. 4th.”