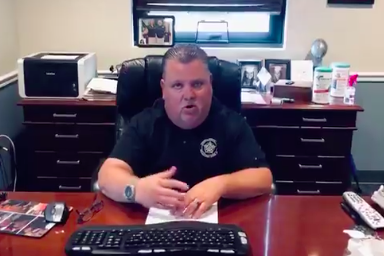 In a matter of a few days, police union president John McNesby has taken heat from both Phildelphia District Attorney Larry Krasner and scorned the Proud Boys, prompting the far-right group to now say the FOP Lodge 5 leader had "stabb(ed) us in the back."

It all stems from Thursday's "Back the Blue" event at the FOP lodge in Northeast Philadelphia, which Vice President Mike Pence attended. It was a campaign stop for the vice president, during which he gave a speech at the union hall showing his support for law enforcement amid widespread criticism following the killing of George Floyd while in custody of the Minneapolis police

🚨At the #BackTheBlue rally, @Mike_Pence made it clear: “Under this president and this administration, we're not going to #DefundThePolice, not now, not ever."@VP told the Philly police officers & the families of the fallen gathered at @FOPLodge5: “We Back The Blue!” pic.twitter.com/9j8QJItar6

Outside the venue, competing demonstrations were held by Refuse Fascism and the Philadelphia chapter of the Proud Boys, a "Western chauvinist" organization that has been designated a "general hate group" by the Southern Poverty Law Center.

The FOP held a private party at the lodge after Pence's visit, and it was reported by the Inquirer that about 10 Proud Boys members flew their flag and mingled among police officers in the parking lot outside the union hall's bar.

McNesby, who faced criticism for the Proud Boys' appearance, released a statement on Saturday saying he was unaware of the Proud Boys members' presence.

"We have recently been informed that members of the Proud Boys were present outside FOP headquarters this week following a visit by the vice president," McNesby said. "If we were aware of their presence, we would have escorted them off our property. At no time were these individuals allowed inside of our building. Philadelphia police officers, FOP leadership and members condemn their hateful and discriminatory speech in any form."

The Philadelphia Proud Boys, who claim they are a multi-racial organization, fired back at McNesby on Twitter. They said they attended the party and spent more than $1,000 there. The group called the the FOP president's statement "repulsive."

Proud Boys are a multi-racial organization with military vets and even retired police, what Mcnesby said after we spent over $1000 is repulsive, and a false narrative painted by the same communists who want to kill cops. John throws his supporters under the bus like he does cops. https://t.co/vsSQmoFdeO

You gutless coward. You welcomed us with open arms and we were there all night. Now you get a little heat from the communists that hate you, and you stab us in the back just like you do to your officers. You're a disgrace to the City of Philadelphia.

“At no time were these individuals allowed inside of our building,” said president of Philly police union in a statement condemning the Proud Boys.

The Proud Boys posted a picture from inside the lodge in their public chat forum on Thursday night. pic.twitter.com/QlfdUTVQfa

“If we were aware of their presence” pic.twitter.com/HwbfNJ3SGw

I'm deeply disturbed by reports that members of the Proud Boys — designated a general hate group by the @splcenter — were at a party hosted by the leadership of the Philadelphia Fraternal Order of Police following Mike Pence’s visit to Philadelphia.https://t.co/Zznay3F71r

"The FOP leadership failed to ask the Proud Boys to leave even after its members aggressively questioned two reporters for attempting to take their photographs, telling one that she was 'heading down a dangerous road' by staying there," Krasner said, referencing an incident with two Inquirer writers. "Police responded to the trouble by asking the Proud Boys if they were okay only to leave, allowing the Boys to try to intimidate two women journalists who were doing their jobs. The Proud Boys followed up with offensive, misogynist social media ridiculing one of the journalists."

Krasner went on to question why McNesby has used more forceful language in the past to condemn Black Lives Matter.

"President McNesby is not always so tongue-tied," Krasner said. "In September 2017, McNesby referred to Black Lives Matter members protesting in front of an officer's house after the fatal shooting by police of a civilian as a 'pack of rabid animals' and a 'racist hate group determined to instigate violence.'"

Contacted Monday afternoon, an FOP spokesperson said McNesby would not respond to Krasner, whom he has accused previously of having an "anti-police agenda."

The incident comes after police have faced scrutiny for their handling of counter-protests last month in Fishtown and South Philadelphia, where armed vigilante residents assembled seemingly without concern from law enforcement.  Two men have since been charged in separate assaults on a journalist and a photographer last month.

The Philadelphia Police Department has opened multiple Internal Affairs investigations stemming from interactions with protesters during demonstrations in June. An independent review of the city's response to civil unrest will be commissioned by the Law Department.

McNesby has grown increasingly critical of Mayor Jim Kenney for going outside the department to hire Commissioner Danielle Outlaw, instead of promoting an internal candidate. Former police commissioner Richard Ross, who replaced Charles Ramsey from within, resigned last year amid reports of sexual harassment and gender discrimination within the department.

"The Mayor and Police leadership are more concerned with appeasing anarchist mobs descending upon our city and are less concerned about our citizens, our neighborhoods and the overall public safety of our great city," McNesby complained last month.

In a video statement, he urged police officers to "keep your heads up" amid low morale and plans for reform centered on accountability.