Philly tosses out citations given to protesters for failure to disperse, curfews and other code violations

More than 700 arrests were made for CVNs amid civil unrest over racism, police brutality 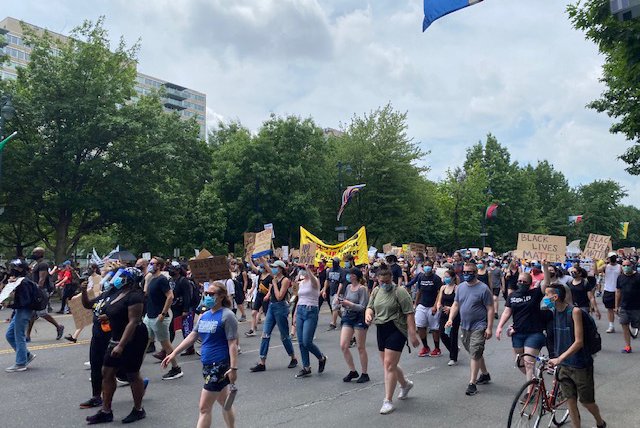 Protesters who were arrested in Philadelphia for code violation notices between May 30 and June 30 will have their CVNs waived. City officials said the decision is intended to promote reconciliation amid civil unrest and a heavy-handed response to mass demonstrations.

Hundreds of code violation notices issued to people during the past month of protests in Philadelphia will be waived, Mayor Jim Kenney announced on Wednesday.

Philadelphia's Law Department and Office of Administrative Review previously recommended that the city drop most CVNs that had been enforced during the height of civil unrest in the city. Protests have persisted for more than a month in Philadelphia following the killing of George Floyd in Minneapolis in late May.

A CVN is a civil citation, not a criminal charge. They typically come with fines and, in the case of Philadelphia's protesters, arrests that involved being jailed in groups until individual violations could be processed.

Fines for failure to disperse and curfew violations, the two most common CVNs issued during the protests, are set at $50 and $25, respectively.

Arrests and charges for criminal matters, such as looting and burglary, will still be pursued and prosecuted.

CVNs for disorderly conduct and related offenses, as well as all curfew violations, will be waived if they occurred between May 30 through June 30.

Any person who received a CVN for a waived violation and has not paid the fine will not need to take any additional action. Those who have paid their CVN can contact the Office of Administrative Review's customer service line at (215) 567-2605 and follow the procedures for a refund.

"My decision to waive these violations is not a statement on the validity of the individual citations," said Kenney. "Rather, it is a recognition of the core concerns that caused thousands to demonstrate on the streets of Philadelphia. In waiving these notices, I recognize that those issues are vitally important, that the pain of those marching is very real, and that their message — Black lives matter — needs to be heard every day until systemic racism is fully eradicated from this city and nation."

During the first four days of protests, from May 30 to the afternoon of June 3, Philadelphia police arrested 490 people for CVNs.

Police provided a further breakdown on Wednesday of the numbers from a longer period between May 29 and June 25.

During that span, there were 80 CVNs issued for disorderly conduct, 316 issued for curfew violations, 21 issued for defiant trespass, 338 issued for failure to disperse and one issued for vandalism. The total in the timeframe was 756.

"As city officials and employees focus on reform and reconciliation, the city must use its administrative resources consistent with those efforts," said City Solicitor Marcel S. Pratt. "We believe that moving forward with these CVNs would have served no useful purpose, and we are glad that the mayor approved our recommendation that they be waived."

The announcement comes after Philadelphia officials apologized for the "unjustifiable" use of tear gas during a June 1 protest on Interstate 676. A moratorium has since been placed on the use of tear gas and other less-than-lethal munitions during protests. Protesters were permitted to march on I-676 during the Fourth of July weekend.

The Philadelphia Police Department also is in the process of developing and implementing reforms, while the Law Department will hire an independent consultant to conduct a review of the city's overall response to the protests.