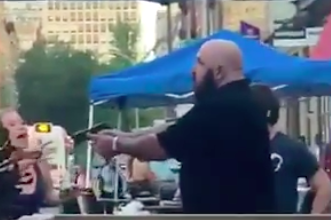 Infusion Lounge owner Jamie Atlig points his gun at a man who allegedly chastised diners at Nick's Roast Beef for their failure to socially distance during the coronavirus pandemic.

Philadelphia police are investigating an incident involving a bar owner who pointed a handgun at a man during a dispute about social distancing last weekend.

A 21-second video of the incident circulated widely on social media after it was posted to Twitter on Monday by an intern for City Council member Isaiah Thomas.

Moments earlier, the man had stopped his bike and shouted "Social distancing! No one is wearing a mask!" according to The Philadelphia Inquirer. Customers shouted at the man to leave and Atlig rose to confront him.

Liz Krieger, a 27-year-old patron, told the newspaper that the man directed a comment about "MAGA privilege" at Atlig, who responded by shouting "Trump 2020!" When Atlig pulled his gun, Krieger said the man pulled out his bike lock in self-defense.

The video, which includes graphic content, can be seen below. It shows Krieger shouting at Atlig to put his gun away as the man backs away from the dining area.

We are actively investigating this incident. If you were a witness, or have any information, please contact Central Detectives at 215-686-3093. You can also report information anonymously at 215-686-TIPS, or on our website - https://t.co/ZgOrozPRov https://t.co/z9jwH6dKIN

Atlig's lawyer, Robert Gamburg, confirmed to The Inquirer that his client is the man with the gun. He said Atlig is licensed to carry a weapon and drew his firearm after feeling threatened.

"The individual reached behind his back for an object, Mr. Atlig unholstered his licensed firearm, defused the situation, and sat back down," Gamburg said.

The man reportedly then left the area on his bike.

The video initially was shared by D.J. Torney, who is a friend of Krieger and an intern for Thomas. His tweet has been retweeted more than 2,000 times.

"My intern, @Dj__Torney, just shared this upsetting story with me. After a weekend of too much gun violence, more guns is not the answer," Thomas tweeted. "We need more solutions before we have more problems! #EnoughIsEnough."

"A gun is not needed for someone encouraging social distance," Torney tweeted. "If you’re being harassed, call the cops that your taxes pay for."

Another Twitter user, with the handle @_SJPeace_, included the video in a tweet that has been retweeted more than 10,000 times.

"Brother was on his bike just reminding people at the bars to practice social distancing when this white man got mad & held him at GUNPOINT!" the user tweeted. "Victim left soon after this. Can anyone identify him? HE DESERVES JUSTICE!"

Editor's note: The original version of this story included racial identities for the two men involved in the incident. They initially were included to acknowledge the potential racial undertones of the incident. They have since been removed because PhillyVoice strives only to include the racial identities of people when race is undeniably an essential factor in the story. The video and witness accounts indicate it was sparked by other factors.