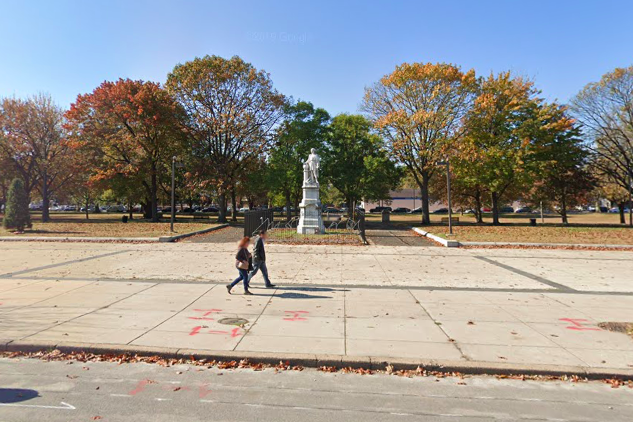 The Philadelphia Art Commission ultimately will decide whether to remove the Christopher Columbus statue at Marconi Plaza in South Philly after a presentation from the city on July 22, 2020. Written public comments and testimony will be heard.

Another night of dueling protests around the plaza on South Broad Street on Tuesday precipitated Wednesday's announcement from Philadelphia Mayor Jim Kenney, who has been critical of armed residents preparing to "defend" the statue from harm.

"Like many communities across the country, Philadelphia is in the midst of a much-needed reckoning about the legacy of systemic racism and oppression in this country and around the world," Kenney said. "Part of that reckoning requires reexamining what historical figures deserve to be commemorated in our public spaces."

The city will formally request the Columbus statue at Marconi be removed during a presentation to the Philadelphia Art Commission in July. Between now and then, the city will be accepting public and written feedback about its intent.

Columbus, long celebrated as a master navigator of Western civilization, has come under greater scrutiny in recent decades by scholars and social movements, alike. For many who see his statue, the unspoken record of colonization and mistreatment of Indigenous people during the 15th century now personifies deep-seated civil unrest in the present-day United States.

In Philadelphia, there are statues commemorating Columbus at Marconi Plaza and on Columbus Boulevard along the Delaware River waterfront. Both statues have been boarded up during protests in recent weeks, and the fate of the latter could also be submitted to a public process.

Elsewhere in the region, a vandalized Columbus statue in Trenton will soon be moved, while monuments in Camden and Wilmington already have been taken down.

Tensions have run high in South Philly amid consideration to remove the Marconi Plaza statue.

Supporters of keeping the statue, many of them armed with bats and other objects, have crowded Marconi Plaza and engaged in both verbal and physical altercations with protesters on several occasions. Police stationed at the park have been criticized for seemingly looking the other way, at times ignoring intimidation and provocation by these groups.

On Tuesday afternoon, a 58-year-old man was arrested after allegedly punching a Black photographer, who filmed as the man shouted at him and threw a fist.

"Clashes between individuals who support the statue of Christopher Columbus in Marconi Plaza and those who are distressed by its existence have deteriorated — creating a concerning public safety situation that cannot be allowed to continue," Kenney said. "We must find a way forward that allows Philadelphians to celebrate their heritage and culture while respecting the histories and circumstances of others that come from different backgrounds."

After the city removed the statue of former mayor Frank Rizzo at Thomas Paine Plaza earlier this month, demands for similar actions to be taken with the Columbus statues have mounted.

Some Italitan-Americans embrace the Columbus statue as a cultural symbol and neighborhood fixture. Among those who have assembled at Marconi Plaza, many appear to show a "nativist" bent toward those who wish to see it removed.

To date, the efforts of this group to keep the statue in South Philly have taken a confrontational political shape, more overt and less organized than the defenders of the Rizzo statue.

But it is still worth noting that Kenney's 2017 push to relocate the Frank Rizzo statue — also through the Philadelphia Art Commission — fizzled out with no discernible resolution until the protests of the last couple weeks prompted swift action by the city.

Kenney said Philadelphia will ask the Art Commission to remove the Columbus statue during a presentation on Wednesday, July 22. Prior to that date, the city will accept public input through written submissions. The city also will allow public testimony at the Art Commission meeting.

"Philadelphia's public art should reflect the people and spirit of our city without dividing us as a community," Berg said. "As we've seen demonstrated here and across the country, many of the individuals that are celebrated in bronze and stone are a point of pride to some, while causing great pain for others whose ancestors were impacted by their actions and whose communities still suffer under systems of oppression."

Residents can share their thoughts on the Christopher Columbus statue by completing this online form by 11:59 p.m. on Tuesday, July 21. More details on that process and public meeting will be shared on the Philadelphia Art Commission's website when available.