Columbus Monument at Penn's Landing being considered for removal

DRWC covers obelisk's base as it launches evaluation process 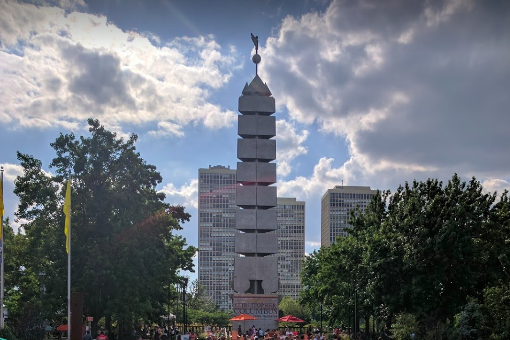 The Columbus Monument at Penn's Landing "is a focus of controversy and pain for many people in the Philadelphia region," the DRWC said in a statement.

The base of the Christopher Columbus monument at Penn’s Landing has been covered as the Delaware River Waterfront Corporation considers its future.

The DRWC has initiated a process to consider the possible removal of the monument in cooperation with Philadelphia officials. Until the process is finalized, the base will remain covered "to protect public safety, reduce continued pain, and to act as a platform for meaningful engagement," according to a statement released Wednesday by the DRWC.

"DRWC recognizes that the Columbus Monument is a focus of controversy and pain for many people in the Philadelphia region and around the country as it fails to address atrocities committed against indigenous people," the statement added. "With this understanding, the monument does not align with DRWC’s mission to create and maintain a safe and welcome space for all.

“We are committed to listening and moving in a direction that will begin the healing process through robust public engagement.”

The Columbus Monument was placed in Spruce Street Harbor Park at Penn’s Landing in 1992 by the America 500 Anniversary Corporation. The DRWC inherited control of the monument as part of its mission to maintain public spaces along the waterfront.

The DRWC's announcement follows a similar move by Mayor Jim Kenney, who ordered the Christoper Columbus statue at Marconi Plaza in South Philly be boarded up until its fate is determined.

Monuments honoring the Italian explorer have fallen under greater scrutiny in recent weeks. Protesters have defaced numerous Columbus monuments across the United States.

Some cities, including Camden, have removed them, viewing them as symbols of oppression committed against indigenous people. Supporters of the statues claim they are a historic marker and symbol of Italian heritage.