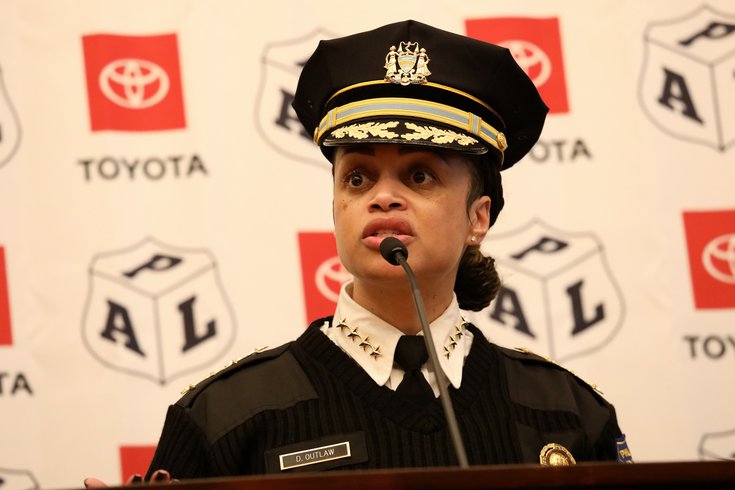 Peter Fratus, 39, of West Dennis, was charged in connection with two emails sent to Outlaw on June 6.

The FBI linked the emails to Fratus and confirmed the origin with forensic evidence, according to prosecutors. One of the emails allegedly questioned Outlaw about her home address.

"As alleged in the criminal complaint, Peter Fratus’ racist threats towards Commissioner Outlaw were vile and disturbing," U.S. Attorney William M. McSwain said. "We take such threats very seriously, and let this be a warning to anyone who might feel the urge to fire off an online threat directed at a public official: we will trace your digital footprint, track you down and hold you accountable."

Outlaw took over as Philadelphia's police commissioner in February after previously leading the Portland Police Department. She has been diplomatic in her communications regarding the wave of protests that followed the death of George Floyd, a black man who died in the custody of Minneapolis police.

Last week, Outlaw joined Mayor Jim Kenney in announcing plans for significant reforms to the Philadelphia Police Department. She has also initiated several Internal Affairs investigations into the conduct of law enforcement during the recent protests.

The Philadelphia Police Department declined to comment on the case.

If convicted, Fratus faces a maximum possible sentence of five years in prison, three years of supervised release and a $250,000 fine.

Fratus made his initial appearance today in the U.S. District Court for the District of Massachusetts, prior to his transfer to the Eastern District of Pennsylvania. A motion will be filed to detain him pending trial.

"While the First Amendment gives us the right to express our own opinions, violent physical threats are certainly not protected speech," said Michael J. Driscoll, special agent in charge of the FBI's Philadelphia Division. "When someone threatens the life of another person, it’s a clear red flag and we have to take their despicable words at face value. Today’s arrest of Peter Fratus demonstrates the FBI’s resolve to investigate and bring to justice anyone who crosses this line."