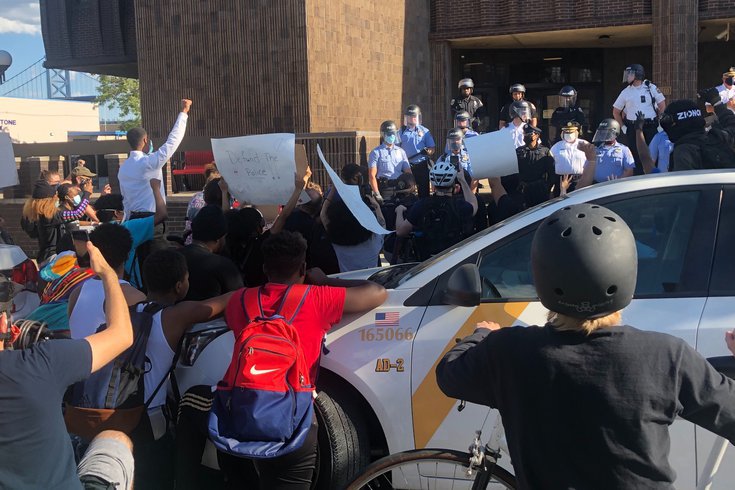 Philadelphia will contract an independent consultant to review how the police department responded to civil unrest following the death of George Floyd. Police union president John McNesby said the review is an example of "second guessing" that show "a total and complete lack of support" for law enforcement.

Philadelphia will bring in an outside evaluator to examine the police department's use of force and overall tactical response to the protests, Kenney and Police Commissioner Danielle Outlaw said Monday.

McNesby, who has increasingly pushed back against critics of law enforcement, called the decision "a new low" in Philadelphia.

"The most recent proclamation by the mayor has taken the deplorable second guessing of police to a new low in Philadelphia," McNesby wrote in a letter.

The letter even appears to take aim at Outlaw, suggesting she is already an "independent" outside hire who came to the city from Philadelphia. At the time of her hiring late last year, FOP Lodge 5 had advocated for an internal candidate to take the job.

"What this city needs is an 'independent consultant' to find real leadership for a city currently controlled by cowards and frauds," McNesby said.

Outlaw called the independent review an important step for the city to take as larger police department reforms get underway.

"As our city and our country continue to mourn and protest the death of George Floyd, and the tragic loss of so many other Black and Brown lives cut tragically short, police departments must respond immediately to the public’s calls for meaningful police reform," Outlaw said. "Our commitment to reform must also include an assessment of how police responded to the very protests that called for change."

Details of the independent review are not yet set in stone and a budget has not been determined. The city may contract one or multiple organizations to conduct the review, which will include an examination of body-worn camera footage, photographs, internal memos, videos on social media and news reports, among other information.

The goal of the review is to determine whether more explicit policies are needed to categorically prohibit or limit certain uses of force by the police department. A final report, once complete, will be made available to the public.

“If we discover that any officers used force inappropriately or without proper authorization, we will deal with it swiftly and accordingly," Kenney said. "I have also asked the PPD to revise policies to further specify appropriate limitations on the use of less-than-lethal munitions, such as tear gas."

The mayor said he was "saddened" to hear that city residents believe he and police leadership supported the use of tear gas on peaceful protesters, notably those who demonstrated on Interstate 676 on June 1. That incident is separately under review by the police department's Internal Affairs division.

The FOP has backed Inspector Joseph Bologna, who was suspended after being charged with assault for striking a Temple University student on the head with a baton during protests earlier this month. McNesby said District Attorney Larry Krasner's decision to prosecute Bologna showed an "anti-police agenda" in the city.

In his letter Monday, McNesby rebuked city leaders for failing to support police.

"The total and complete lack of support, courage and leadership from this administration is quietly leading to a paralysis of law enforcement in Philadelphia which will only endanger our citizens," McNesby wrote.

The independent review comes as police confirmed Monday there will be another Internal Affairs investigation of the armed vigilante residents who assembled at Marconi Plaza in South Philadelphia last weekend to defend the statue of Christopher Columbus.

Kenney and Krasner condemned the displays of vigilantism at the plaza, where videos on social media garnered widespread attention over the weekend.

Similar displays of vigilantism that occurred in Fishtown earlier this month also are under review by Internal Affairs, which is looking into the role 26th District police may have played in permitting armed residents to take to the streets.

Kenney commended Outlaw for welcoming scrutiny of the department's response over the past few weeks.

“I applaud Commissioner Outlaw for her courage and discernment to utilize the events of the past few weeks as an opportunity to improve how the Police Department responds to protest activity and better serve the residents of Philadelphia," Kenney said. "We absolutely must do better to build trust with our communities, and our response to the recent demonstrations further highlighted the amount of work we have before us."