Department investigates why counter-protesters were allowed to wield bats, clubs 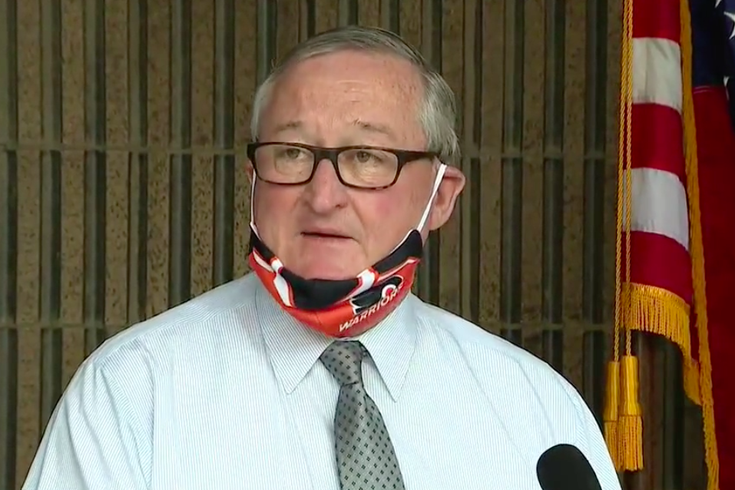 Philadelphia Mayor Jim Kenney says the city will not tolerate displays of armed vigilantism such as those seen Monday night in Fishtown.

Philadelphia officials denounced the actions of an armed group of vigilante residents who gathered in Fishtown on Monday night in response to the civil unrest witnessed in the city.

Videos of the gathering showed a group of people wielding baseball bats and clubs in the vicinity of the 26th District police station, located near the busy intersection of Frankford and Girard avenues.

Those who gathered claimed to be protecting private property and standing in solidarity with local police. Videos taken from the scene suggest some in the armed group were attempting to intimidate others. One news reporter documenting the scene allegedly was assaulted.

Looks like quite the double standard going on in Fishtown.

It seems white vigilantes can walk around armed with baseball bats and who knows what else while protesters are reviled and treated like criminals.

What's different about that crowd? You see it?pic.twitter.com/qWQsawNIMQ

Police in Fishtown stand idly by as these goons threaten peaceful protesters with bodily injury.

Why weren’t these citizens forced to leave the streets by police after curfew like everyone else? — Oh I don’t know... MAYBE BECAUSE THEY HAD BASEBALL BATS? — #fishtown #phillyprotests #Phillypressconference pic.twitter.com/dJKmjWteRq

this is just insane: there’s a curfew in philly right now, and there’s a gang of white people with bats and other weapons roving around fishtown. the police kindly asked them to disperse and then arrested a black person who had a bat thrown at him. pic.twitter.com/3JaipH1VVq

On the other side of the intersection, a group of protesters assembled in opposition to the armed group. Philadelphia police formed a line between the two groups, with a SWAT vehicle at the scene. Witnesses reported seeing police fraternize and take photos with the armed group.

Mayor Jim Kenney said the city will not tolerate armed displays of vigilantism during a press conference Tuesday. The incident, including the conduct of 26th District police, is under investigation.

“We will not tolerate it moving forward.”

"We do not condone vigilantism," Kenney said. "We understand that communities desire to protect their neighborhood, and if they want to do that in peace, we would allow it, regardless of neighborhood. But armed vigilantism will not be tolerated moving forward. I am glad police moved in to eventually disperse the group, but I am not happy about how long it took."

Police Commissioner Danielle Outlaw acknowledged the alleged assault of WHYY producer John Ehrens, which took place after most of the Fishtown gathering had been dispersed.

Ehrens, who had been documenting the scene on Twitter, said a group of armed men violently retaliated against him for filming them. A separate video from the scene appeared to show a brief portion of the alleged assault.

"We do not condone any acts of violence, and as an agency we don't take sides," Outlaw said. "Our mission is to always protect all persons, personally. We are not proponents of intimidation and fear for the purpose of being bullies."

Outlaw added that the armed group was not welcome, invited or needed.

"I would not describe that group as someone that I would want speaking for me, or on behalf of my police department," Outlaw said.

Later Tuesday, 26th District police urged residents in the area to stay home. Changing their position from Monday, they said large gatherings that condone violence with weapons will be illegal.

We highly urge all residents to stay at home today and practice social distancing during our global pandemic. Although we continue to up hold all constitutional rights, large gatherings that condone violence with weapons is illegal and will be addressed accordingly.

Looting and destruction have occurred in many Philadelphia neighborhoods since Saturday, when peaceful demonstrations calling for justice for George Floyd devolved into chaos.

Floyd died in Minneapolis police custody on May 25. Four police officers were fired in the days following his death, including Derek Chauvin, who has been charged with third-degree murder and manslaughter.

Outlaw also addressed several other incidents that unfolded in Philadelphia over the last 24 hours.

The city's decision to use tear gas on protesters who marched along Interstate 676 — described as a "last resort" — will be reviewed by Internal Affairs, she said. The same will go for any other uses of tear gas across the city.

Outlaw specifically addressed a video that showed an officer pulling down the face mask of a protester to pepper spray her.

Kenney added that the use of pepper spray seen in the video was "totally unacceptable."

A deadly shooting at a South Philadelphia gun shop, where the property owner allegedly defended himself against a looting attempt, also remains under investigation. The owner is cooperating with police.

"While I understand the rights of individuals to protect their property, I am also deeply troubled at the ease with which another life has been taken," Kenney said.

Outlaw declined to get into specifics while the investigation remains in its preliminary stages.

A series of incidents involving looting attempts at ATMs resulted in the death of a 24-year-old man on Tuesday morning. Investigators found live explosives at the scene in Kensington, where the victim suffered fatal wounds.

Outlaw said Philadelphia police are working with the Bureau of Alcohol, Tobacco, Firearms and Explosives to determine if there is a pattern to these crimes.

Since the start of the protests on Saturday, there have been 692 arrests and 25 police officers injured. To address looting, police have deployed dedicated teams to six geographic patrol divisions across the city.

"We got word overnight that looting led to a fatal injury of a 19-year-old student," Kenney said. "These incidents are all stark reminders that none of this is a game. Looting has consequences. Futures are being lost and destroyed by this. Lives are being lost. A pair of sneakers or a video game are simply not worth your future."

A fourth night of curfews will go into effect at 8:30 p.m. Tuesday in order to ensure that voters are able to participate in the primary election. Those submitting mail-in ballots are now permitted to send them in by June 9 as long as they are postmarked by June 2.

"Philadelphians who still need to get to the polls to cast their vote will be able to do so freely," Kenney said. "Polling places will remain open until 8 p.m. We will make sure that anyone traveling home does not need to be concerned about issues with the curfew.

"This holds true for both voters and election workers. You should not be afraid to go to the polls or drop off your mail-in ballot today. There is nothing more sacred than the right to vote, and we vow to protect that right."