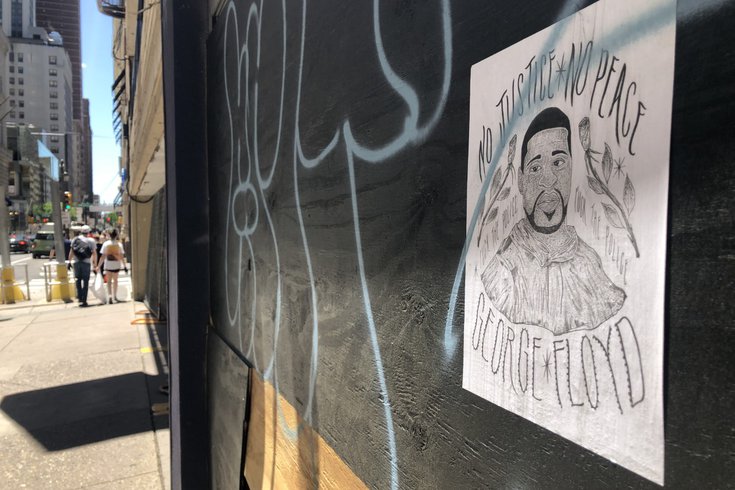 A drawing of George Floyd and graffiti appear on the boarded up windows of a business near 15th and Lombard streets in Center City on Sunday.

President Donald Trump called Philadelphia "a mess" during a video teleconference with governors on Monday morning after peaceful protests turned violent and caused destruction in the city over the weekend.

The comment were heard on audio of the call obtained by CBS News.

"Philadelphia's a mess ... What happened there is horrible," Trump said, referencing the destruction and looting that occurred in the days before, following what began as peaceful demonstrations calling for justice for George Floyd, a black man, who died in Minneapolis police custody on May 25. Four police officers were fired in the days after his death, including Derek Chauvin, who has been charged with third-degree murder and manslaughter.

Trump's criticism of Philadelphia comes just one day after he took to Twitter and called for "Law & Order" across the city on Sunday. He also urged that the National Guard be called in to take control of the situation, which he repeated on his call with the governors on Monday morning.

"You're making a mistake because you're making yourselves look like fools," Trump said. "And some have done a great job. But a lot of you, it's not — it's not a great day for our country."

Law & Order in Philadelphia, NOW! They are looting stores. Call in our great National Guard like they FINALLY did (thank you President Trump) last night in Minneapolis. Is this what voters want with Sleepy Joe? All Dems!

The Pennsylvania National Guard was deployed to support local police and secure critical points of infrastructure across Center City on Sunday night.

Philadelphia Mayor Jim Kenney said on Sunday that the White House is among those across the country "who want to see a continuation of systemic racism." The Trump administration "will use the damage, violence, and looting to perpetuate their sick hatred," the mayor said.

Philadelphia was among a number of U.S. cities where there were peaceful demonstrations followed by violence and destruction.