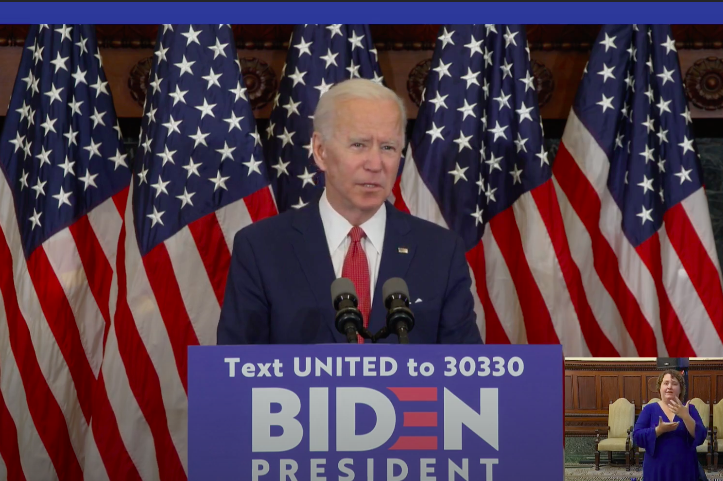 Joe Biden addresses the civil unrest witnessed throughout the United States during a speech Tuesday at Philadelphia's City Hall.

Former Vice President Joe Biden called for the United States to confront systemic racism Tuesday as he addressed the civil unrest sparked by the death of George Floyd.

The presumed Democratic presidential nominee delivered his speech at City Hall as Pennsylvania voters headed to the polls. He began by repeating Floyd's last words, "I can't breathe."

"And they speak to a nation where, every day, millions of people — not at the moment of losing their life — but in the course of living their life — are saying to themselves, 'I can't breathe.'"

Biden criticized President Donald Trump's response to the protests, saying the country is "crying out for leadership." The president needs to be "part of the solution, not the problem," he added.

He accused the White House of using tear gas to clear peaceful protesters from Lafayette Park in Washington D.C. so Trump could stage a photo-op in front of St. John's Episcopal Church. (The U.S. Park Police says its officers used smoke canisters, according to NPR). Once there, Trump held up a Bible.

"I just wish he'd open it every once in a while, instead of brandishing it," Biden said. He added that Trump "might also want to open the U.S. Constitution every once in while" to read the First Amendment, which protects the right to protest.

Biden called on Congress to pass police reform legislation and urged police departments to undergo a comprehensive review of their hiring, training and de-escalation practices.

With presidential primary elections taking place in seven states, including Pennsylvania, Biden painted a stark contrast between himself and Trump.

"I promise you this. I won't traffic in fear and division," Biden said. "I won't fan the flames of hate. I'll seek to heal the racial wounds that have long plagued this country — not use them for political gain.

"I'll do my job and I will take responsibility. I won't blame others. I will never forget, I promise you, this job is not about me. It's about you. It's about us. And I'll work to not only rebuild this nation, but to build it better than it was."

The Republican National Committee released a statement in response, criticizing Biden's campaign staffers for donating money to the Minnesota Freedom Fund, a nonprofit that pays the bail of low-income people who cannot afford to do so.

"While livelihoods were decimated, the Biden team was focused on raising money to bail out the criminals arrested," the statement read. "President Donald Trump was focused on restoring peace and pursuing justice for George Floyd and the victims of the violence. A stark contrast in values."