The former V.P. outpaced Sen. Bernie Sanders, who had suspended his campaign in April; The president defeats two unknowns 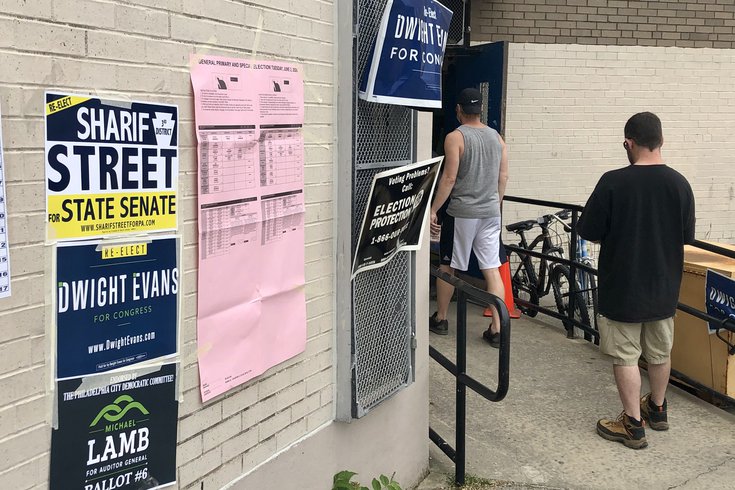 People wait to vote at Cook Wissahickon School in Roxborough on Tuesday, June 2, 2020. Those who cast ballots in person practiced social distancing and wore masks, as did poll workers, because of the COVID-19 pandemic.

Joe Biden is the winner of Pennsylvania's Democratic primary election, and on the Republican side, President Donald Trump moved ahead unabated.

The Associated Press declared the former vice president to President Barack Obama the winner less than 30 minutes after the polls closed at 8 p.m. on Tuesday. Biden was on the Ballot with Vermont Sen. Bernie Sanders and Hawaii Rep. Tulsi Gabbard, both of whom had already suspended their campaigns.

Biden campaigned on a platform that seeks to enhance the Affordable Care Act with a public option, increase the minimum wage, build a labor-friendly climate agenda and make higher education more accessible for all. He also has called for greater protections for essential workers during the COVID-19 crisis and urged police reform to address systemic racism in the criminal justice system, which he spoke about in Philadelphia on Tuesday morning.

Biden became the presumptive Democratic pick to run against President Donald Trump in November's eleciton after Sanders suspended his campaign in early April. Gabbard also remained on Democratic ballot. She suspended her campaign in March and has endorsed Joe Biden.

The longtime Delaware senator has positioned himself as the most experienced and qualified candidate to defeat Trump in November's general election. Biden entered Tuesday's primaries — covering eight states and Washington, D.C. — with a 10-point lead over Trump in an ABC News/Washington Post poll released Sunday.

Due to the unprecedented volume of mail-in ballots, exact totals for Pennsylvania's primary races won't be known for several days. Approximately 1.8 million Pennsylvania voters requested mail-in ballots for the primary election, a trend driven by the uncertainties of the ongoing coronavirus pandemic.

In Pennsylvania, Biden's Scranton roots are regarded as an advantage in what will again be a battleground state in 2020. Though he has faced criticism for his age, legislative record and allegations of past misconduct, Biden has maintained a strong base of support among black, suburban and blue-collar voters. His struggles attracting younger voters may see him adopt more progressive stances as the election nears.

Even with Sanders' campaign suspended, Biden has lacked the necessary 1,991 delegates needed to seal the Democratic nomination. Sanders pledged to remain on all primary ballots in order to influence the party's platform at the Democratic National Convention in Milwaukee in August.

With 479 delegates up for grabs in Tuesday's primaries, Biden swept Tuesday night's primaries and came within striking distance of the official nomination. He entered the night with 1,556 delegates and emerged Wednesday morning with just 1,903, needing just 88 more. Pennsylvania had 186 delegates at stake.

Find more PhillyVoice coverage of the 2020 Pennsylvania Primary Election below.

Challenger Nikil Saval has defeated incumbent State Sen. Larry Farnese in the Democratic primary for Pennsylvania's 1st District senate seat. The district covers parts of Center City, South Philly and North Philly. The Associated Press is projecting Savel, a democratic socialist endorsed by Vermont Sen. Bernie Sanders, will win. Farnese, a lawyer, has held the office since 2009. Saval, a cofounder of the progressive group Reclaim Philadelphia, is a widely published writer and editor with experience at n+1 and contributions to The New York Times and The New Yorker. Saval's campaign is focused on guaranteed affordable housing for all, prison reform, universal expansion of health care, reconstruction of Philadelphia's schools and a Green New Deal for Pennsylvania's economy and environment.

In the Pennsylvania House's 182nd District, Democratic challenger Marisa Shaaban held a narrow lead over incumbent Rep. Brian Sims with 90.43% of precincts reporting in Tuesday primary election. Sims, seeking his fifth term, became the legislature's first openly gay member in 2013 and has served as a vocal progressive in Harrisburg. He has been a strong advocate for LGBTQ and reproductive rights during his time in office. Shaaban is a policy professional who currently serves as secretary of Philadelphia's 5th Ward. She is campaigning for fully-funded public education, improving healthcare access and investing in efficient, reliable public transportation. The 182nd District includes parts of Center City, South Philly and North Philly.

The winner of the Democratic primary will face Republican challenger Drew Murray, a Villanova native and career sales professional, in November. He ran unopposed on the Republican ticket.

In Pennsylvania's 1st District of the U.S. House, there are contested primaries on the Republican and Democratic sides of the ballot. The congressional district covers portions of Bucks and Montgomery counties. On the Republican side, incumbent Rep. Brian Fitzpatrick is challenged by Andy Meehan, a financial planner and investment advisor who has criticized Fitzpatrick for his bipartisan leanings in Congress. On the Democratic ticket, Bucks County solicitor and Ivyland Borough Councilmember Christina Finello has defeated Skylar Hurwitz, a technology entrepreneur in New Hope.

Six Democrats vie to be candidate for Pennsylvania auditor general

The race for Pennsylvania auditor general, the state's chief fiscal watchdog, seeks a replacement for outgoing Democrat Eugene DePasquale, who reached his term limit and is running in the primary election for the U.S. House seat in Pennsylvania's 10th District. There are six candidates on the ballot vying for the Democratic nomination. Nina Ahmad, H. Scott Conklin, Rosie Davis, Tracie Fountain, Christina Hartman, Michael Lamb. Timothy DeFoor is the lone candidate on the Republican side.