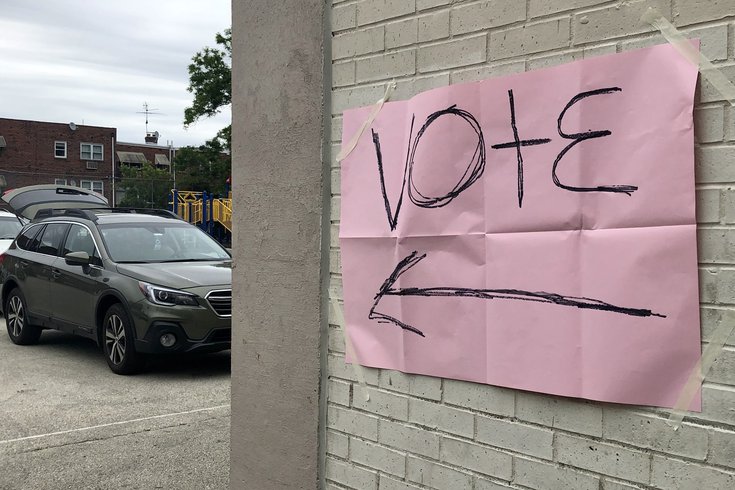 A sign outside Cook Wissahickon School in Roxborough directs people where to go to vote on June 2, 2020. Because of the COVID-19 pandemic Philadelphia consolidated and relocated many of its polling places.

The 182nd District includes parts of Center City, South Philly and North Philly. Due to the unprecedented volume of mail-in ballots, the winners of Pennsylvania's primary races won't be known for several days. Approximately 1.8 million Pennsylvania voters requested mail-in ballots for the primary election, a trend driven by the uncertainties of the ongoing coronavirus pandemic.

Sims, seeking his fifth term, became the legislature's first openly gay member in 2013 and has served as a vocal progressive in Harrisburg. He has been a strong advocate for LGBTQ and reproductive rights during his time in office.

In recent years, Sims' aggressive advocacy has garnered national attention, including a confrontation with a Planned Parenthood protester in Center City. Then last month, Sims created waves when he accused Republicans of covering-up the COVID-19 diagnosis of one of their members.

Shaaban is a policy professional who currently serves as secretary of Philadelphia's 5th Ward.

She has a background in government relations, grew up in New York and has been a Center City resident for the last 16 years. Her campaign is focused on fully-funded public education, improving healthcare access and investing in efficient, reliable public transportation. Shabaan also supports reproductive rights and hopes to join a progressive group of women in office in Harrisburg.

The winner of the Democratic primary will face Republican challenger Drew Murray, a Villanova native and career sales professional, in November. He ran unopposed on the Republican ticket.

He's opposed Philadelphia's supervised injection sites intended to combat the opioid epidemic, and has also come out against the city's "sanctuary" status for undocumented immigrants.

Murray has stated he hopes to reform Philadelphia's wage and real estate taxes, as well as protect registered community organizations from SLAPP lawsuits that stifle community participation in local affairs.