The Democrat broadcast the video, recorded outside the clinic in Center City, to mixed reactions 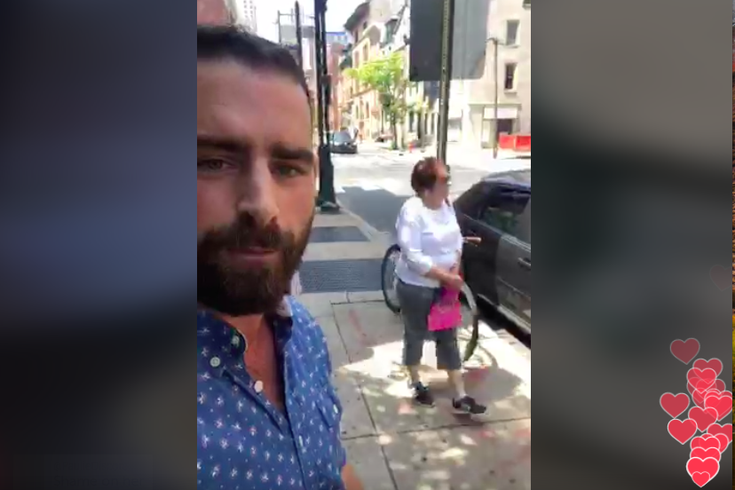 Rep. Brian Sims filmed himself talking to an anti-abortion protestor outside a Planned Parenthood in Center City.

Pennsylvania Rep. Brian Sims is getting pushback this week for a video he filmed outside a Planned Parenthood of him shaming an anti-abortion protester.

The eight-minute video was broadcast live on Periscope on Thursday and Sims posted a link on his Facebook later. It shows Sims approaching an abortion protester, who he calls an "old white lady," as she paces on the sidewalk outside the Planned Parenthood of Southeastern Pennsylvania at 11th and Locust streets. In the video, Sims says the woman was engaging with people before they entered the clinic.

"Who would have thought that an old white lady would be out in front of a Planned Parenthood telling people what's right for their bodies?" Sims said on camera. "Shame on you. Shame on you for hiding your face at the same time that you're shaming other people."

Sims continued, "Again, the same laws that protect me, protect you and that's OK. You're allowed to be out here. That doesn't mean that you have a moral right to be out here. Shame on you. What you're doing here is disgusting. This is wrong. You have no business being out here. ... Disgusting."

The unidentified woman mostly ignores Sims, the Democratic representative for the state house's 182nd District, except briefly to say, "Get your camera out of my face. It's none of your business."

During the Periscope, Sims calls for those watching to donate $100 to Planned Parenthood for every hour the protestor was standing outside the Center City Planned Parenthood. More than 1 million people watched the video since it was posted Thursday.

Sims issued a statement Tuesday afternoon, part of which he used to explain his actions:

“I’ve received a lot of responses to a video posted on my Facebook page last week and I want to provide some background.

“For years, I have lived across from this Planned Parenthood where women, men and families go to receive cervical cancer screenings, breast exams, pap tests, STD screenings, and yes, abortions. I go to this center for life saving PrEP medication and I value everything that they do for those in need, including the nearly 40,000 men and women who sought care there last year.

“As a volunteer patient-escort myself at this clinic for the last seven years, I have seen insults, harassment, racism and slurs directed at mostly young women entering the building to seek care. Care for conditions that we, as outsiders, know nothing about. Last week was no different. What I failed to show in the video was the group of protesters praying at, not silently praying for, people entering the Planned Parenthood, intercepting them and harassing them for their personal choices.

“In my years standing with Planned Parenthood, I’ve watched women and girls circle the block one, two, three times before disappearing, too afraid to cross the battle line outside.

“This history led me to my actions last week. I know protestors have the right to assemble outside and so do I. I will fiercely protect a woman’s right to make the best choices for herself and for her body because it is HERS. I’m committed to defending a woman's right to choose and I always will be."

Your Planned Parenthood needs you now more than ever! Please donate to your local @PPFA affiliate or give to @PPact or to my local Planned Parenthood at @PPAdvocatesPA. Don’t believe, read the comments... 🏳️‍🌈🇺🇸 https://t.co/Ymu6NPm2KL

Reactions to Sims' now-viral video have been mixed. Some have hailed him for standing up to the woman and representing women who use the health center's resources. Others called him a "jerk" and a "bully." An opinion piece in the Inquirer on Monday called Sims out for publicly shaming the woman.

"I am extremely troubled by the fact that a man who is paid by our tax dollars feels it is appropriate to publicly shame one of those taxpayers just because he disagrees with her," conservative columnist Christina Flowers wrote.

Now, Flowers and other anti-abortion activists – like a family Sims recorded in April while they were protesting at the same location – are trying to draw support to their own cause. They have created a GoFundMe to support the Pro-Life Union of Greater Philadelphia on Monday called, "Show Brian Sims the Power of the Pro-Life Movement." By Tuesday morning, it had raised more than $4,600 of its $100,000 goal.

“State Rep. Brian Sims’ harassment of a woman’s peaceful and religious exercise of her First Amendment rights is yet another example of a troubling trend of growing extremism and hypocrisy among Democrats. People are entitled to exercise their First Amendment rights and should be free from intimidation and harassment, even when their views makes left wing Democrats like Rep. Sims uncomfortable," he said.

Sims acknowledged people who felt he went too far with his actions in his statement:

“But as a Planned Parenthood supporter and seasoned volunteer escort, I fully understand and respect their non-engagement policy and the last thing that I want to do is interfere with patients, staff or daily operations. As an activist and an advocate, I’ve learned that pushing back against harassment and discrimination are a must, even when it’s uncomfortable.

“When I was there on Thursday afternoon, I was not a volunteer escort; I was a neighbor, a concerned citizen and an unwavering supporter of women’s rights and yes, I was aggressive. I know that two wrongs don’t make a right, especially when I’m on the front lines of this civil rights battle. I can do better, and I will do better, for the women of Pennsylvania."