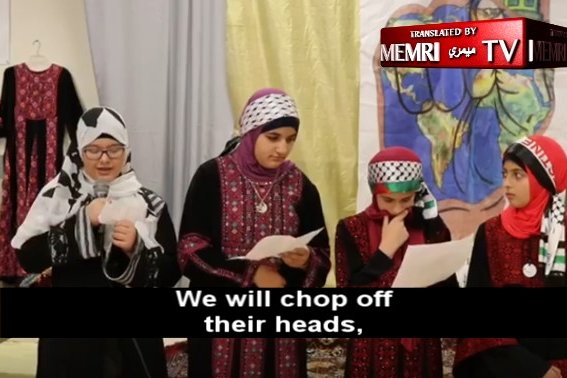 A video posted to Facebook page of the Muslim American Society's Philadelphia chapter that showed children singing and speaking about beheadings and torture was not 'properly vetted,' officials with MAS's national headquarters say.

The video posted to the Facebook page of the Philadelphia chapter of the Muslim American Society that shows children saying "we will chop off their heads" and "we will subject them to eternal torture," was not vetted by the organization's leadership, officials said.

Muslim American Society national leadership condemned the video on Sunday, calling it "disturbing" and saying it "does not represent our understanding of Islam, nor the understanding of the mainstream Muslim community."

MAS said a school, identified as a local leaders academy, that is unaffiliated with the Philadelphia chapter organized the April event and had rented the space at the local North Philly facility.

The video shows children wearing Palestinian scarves at an "Ummah Day" celebration on April 17 at the Muslim American Society Islamic Center in North Philadelphia singing a song. Here is one portion of the lyrics, translated by MEMRI:

"We will defend the land of divine guidance with our bodies, and we will sacrifice our souls without hesitation. We will chop off their heads, and we will liberate the sorrowful and exalted Al-Aqsa Mosque. We will lead the army of Allah fulfilling His promise, and we will subject them to eternal torture."

The lyrics refer to Israel's closure of a building in Jerusalem in February, known to Jews as the Temple Mount and by Muslims as the Noble Sanctuary. The compound, home to the Al-Aqsa Mosque and the golden Dome of the Rock, is the third-holiest Islam site and the holiest site of Judaism.

MAS national leadership posted to Facebook on Sunday after it conducted an investigation into the video.

"Unfortunately, the video from the school was uploaded to the chapter’s Facebook page without verifying the content of the video for appropriateness and making sure it conforms to our hate-free policy and values. The chapter will take further steps in assuring strict adherence to publishing and posting policies," the post read.

The post also said the person in charge of the program was dismissed and a local commission was being formed to aid in sensitivity training and supervision.

Philadelphia's Anti-Defamation League condemned the incident in a statement.

“Children should not be indoctrinated to hate. These young people should never have been asked to make speeches and dance and lip-sync to songs that glorify violence against Jews and the State of Israel. The conflict between Israelis and Palestinians is deeply complex and painful on all sides, and the only chance for a peaceful future is to teach our children to pursue peace,” the statement read.