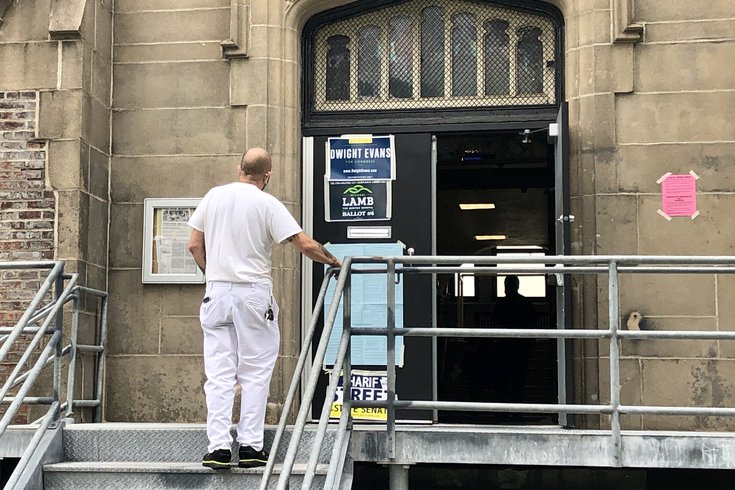 A man enters the polling place at Kendrick Recreation Center on Ridge Avenue in Roxborough on Tuesday, June 2, 2020. Because of the COVID-19 pandemic Philadelphia consolidated and relocated many of its polling places for the election.

The race for Pennsylvania auditor general, the state's chief fiscal watchdog, seeks a replacement for outgoing Democrat Eugene DePasquale, who reached his term limit and is running in the primary election for the U.S. House seat in Pennsylvania's 10th District.

There are six candidates on the ballot vying for the Democratic nomination.

Due to the unprecedented volume of mail-in ballots, exact totals for Pennsylvania's primary races won't be known for several days. Approximately 1.8 million Pennsylvania voters requested mail-in ballots for the primary election, a trend driven by the uncertainties of the ongoing coronavirus pandemic.

Nina Ahmad is a former Philadelphia deputy mayor and entrepreneur with a background in molecular biolgy. She previously ran for lieutenant governor and has served as president of the Philadelphia National Organization for Women and on the board of the Philadelphia Foundation. She earned a Ph.D. from the University of Pennsylvania and immigrated to the United States from Bangladesh at 21 years old.

Lamb, an attorney, was a founding chair of the community group A Plus Schools in Pittsburgh and has served on the boards of numerous organizations in Allegheny County. Lamb is campaigning to be an advocate for taxpayers against Wall Street, big corporations and special interests. He is a proponent of legalizing recreational marijuana and advocates for strong unions to support middle class jobs.

Scott Conklin, a carpenter by trade, currently is a member of the Pennsylvania House of Representatives in the 77th District, representing Centre County. He also is on the ballot running for reelection to that seat.

Rose Davis is a certified public accountant in Monroe County. She has run her own financial management consulting business for a decade and is vice chair of the Smithfield County Board of Auditors. Davis also is a member of the Finance Committee of the Shawnee Valley Owners Association and the Monroe County NAACP.

Davis has said she's seeking the office to ensure that tax dollars are spent reasonably, properly and fairly.

Tracie Fountain has been an employee of the Office of the Auditor General for 30 years, most recently serving as the Audit Bureau Director. In the past, Fountain has directed bureaus for the School Audits, State-Aided Audits, Volunteer Firefighters Relief Association Audits, Liquor Audits, and Children and Youth Services Audits in Pennsylvania.

If elected, Fountain wants to make the most of the Auditor General's resources by analyzing office functions and rooting out fraud, waste, abuse, or mismanagement of taxpayer funds. ()

Christina Hartman is a Lancaster County consultant with expertise in strategic planning, fundraising, and management guidance to non-profit organizations and trade associations. She previously ran for Pennsylvania's 16th Congressional seat in 2016. She received the endorsement of former Pennsylvania Gov. Ed Rendell.

The winner of the Democratic primary will run against Republican Timothy DeFoor in the November general election. He ran unopposed in Tuesday's primary election.

DeFoor is the Dauphin County City Controller. He formerly worked in the Pennsylvania Attorney General's Office and worked as a special investigator in the state Inspector General's Office.