Office will review both police and civilian activity 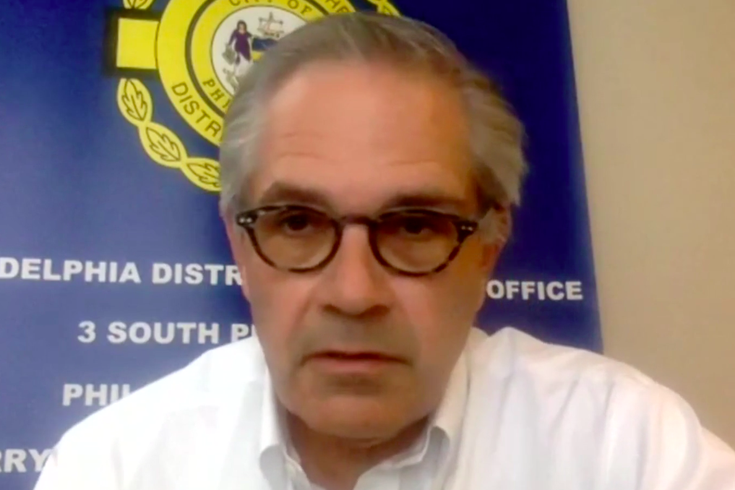 District Attorney Larry Krasner, shown above during an online briefing Friday, is starting a task force to investigate the validity of arrests made in connection to George Floyd protests in Philadelphia.

The Philadelphia District Attorney's Office is creating a task force to investigate the more than 2,000 arrests made in connection to George Floyd protests.

It will be a "collaborative review effort," District Attorney Larry Krasner said, that is also intended to reduce jail populations amid the COVID-19 pandemic, honor the rights of protestors, and prosecute those who have endangered the public, which includes police officers.

The progressive district attorney, known for suing the Philadelphia Police Department for abuse more than 75 times, announced the task force via a Zoom press conference on Thursday.

"Peaceful protest is not a crime," Krasner said. "We take the obligation to investigate instances of violence by police officers."

The task force will source information from "both individuals and law enforcement," in a pledge meant to express police accountability, Krasner said.

Between May 30 and June 10, half of the total arrests in Philadelphia have been code violation notices, which include curfew violations, failure to disperse, or allegations of public disturbances. The other 1,000 arrests are related to people arraigned on felony or misdemeanor charges made during the past 10 days, mostly related to lootings.

The ages and arrest records of those apprehended also motivated Krasner to form the task force. Most of the protesters arrested were 18-24 years old, and 39% of defendants had no prior arrests, an increase from the 28% arrested with a record from the same time in 2019.

The task force will also help in "avoiding the disaster of cases that happened during the Republican National Convention," Krasner said, which took place in Philadelphia in 2000. Lynne Abraham was the district attorney at the time and her office pursued charges against the protesters for years after the event even as judges threw many cases out.

Krasner was a defense attorney at the time who represented some of the protesters. He told the New York Times in December 2000 that many people should never have been arrested.

''Essentially it was a war on free speech that the city has been gradually losing,'' Krasner said at the time.

But Krasner and the district attorney's office has come under scrutiny in recent days for the large number of people it has charged in connection to George Floyd protests. Floyd, a black man, was killed in the custody of Minneapolis police on May 25 when an officer pinned him to the ground with his knee on Floyd's neck for nearly nine minutes. Derek Chauvin, an officer who is white, is charged with second-degree murder. Three other police on the scene at the time have been charged with aiding and abetting murder and all four cops have been fired from the Minneapolis Police Department.

Krasner has countered that people issued code violation notices were not being criminally charged.

"The largest number of people arrested by police have been put through a process similar to a traffic ticket," Krasner said. "We are not seeing a pattern of peaceful protestors being held in custody."

Code violation notice arrests are also traditionally handled by the police department and not the D.A.'s office, Krasner told Insider on Friday. The charges Krasner is handling in connection to protests are mainly those for alleged looting.

Krasner also responded to suspicion that "outside agitators" accounted for most of the arrests. About 75% of the people arrested during the protests were Philadelphia residents – which is not far off the 76% ratio that is the norm.

Because of ongoing coronavirus pandemic, Krasner hopes to decrease the jail populations by quickly investigating these recent arrests, and speeding up trials that may be slowed by closures to court systems.

"There is a great danger of that number increasing," Krasner said. "Given that we don't have a functioning court system."