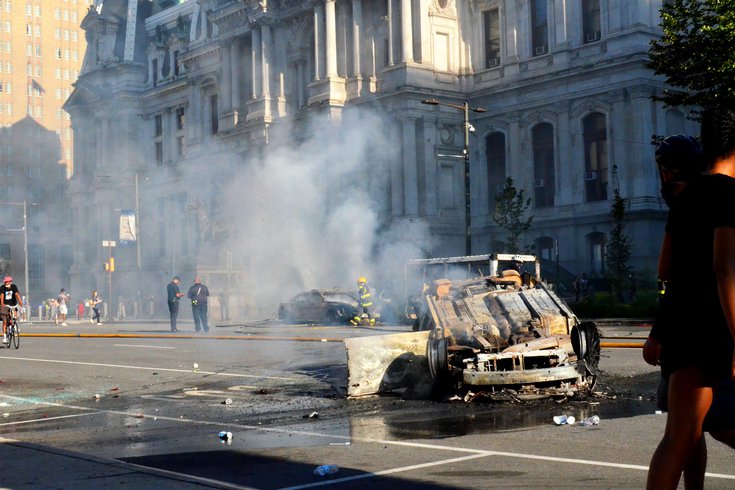 Federal authorities tracked down a woman who allegedly lit two Philadelphia Police Department vehicles on fire during a protest on the north side of City Hall on May 30, 2020. What began as peaceful demonstrations for George Floyd became chaotic, sparking a wave of civil unrest in the city.

Lore-Elisabeth Blumenthal, 33, was charged Wednesday following an investigation of the incident that occurred May 30.

Protests for Floyd, a black man killed while in the custody of Minneapolis police, began peacefully in Philadelphia that Saturday afternoon. Later, the protests at City Hall turned to looting and property destruction in the surrounding parts of Center City.

Amid the chaos, at least four Philadelphia Police Department vehicles were set ablaze, Police Commissioner Danielle Outlaw said in the aftermath of the first day of protests.

Blumenthal is charged in the arson of two of them, a sedan and an SUV.

Blumenthal was seen in multiple social media videos on the north side of City Hall, wearing protective goggles and flame-retardant gloves. FBI investigators said Blumenthal allegedly took a flaming piece of wooden police barricade from the rear window of the police sedan — which was already on fire — and shoved it into the police SUV. The second vehicle ignited within minutes and both cars were destroyed.

Court filings obtained by the Philadelphia Inquirer indicated that the FBI meticulously tracked Blumenthal down by zeroing in on a peace sign tattoo on her forearm and an article of clothing she wore. She reportedly will be represented by a lawyer who has formed a group to advocate for privacy against government surveillance, which has become a growing concern for those who participate in protests.

"Torching a police car has nothing to do with peaceful protest or any legitimate message," U.S. Attorney William M. McSwain said. "It is a violent and despicable act that will be prosecuted in this District to the fullest extent of the law. Anybody who engaged in such acts can stand by to put your hands behind your back and head to federal prison. We are coming for you.”

More than 700 arrests were made by Philadelphia police during the height of the protests earlier this month. Most of them were code violation notices or in connection with commercial burglaries and looting. Police continue to search for numerous looting suspects.

“During the past several weeks, multitudes of people peacefully and lawfully exercised their First Amendment right to protest,” Outlaw said. “However, there were individuals who chose to use the protests as an opportunity to engage in criminal activity. Some of these individuals’ actions were malicious, destructive, and could have resulted in critical injuries to others."

Blumenthal faces a maximum possible sentence of 10 years in prison and a fine of up to $250,000. Prosecutors have filed a motion to detain Blumenthal pending trial.