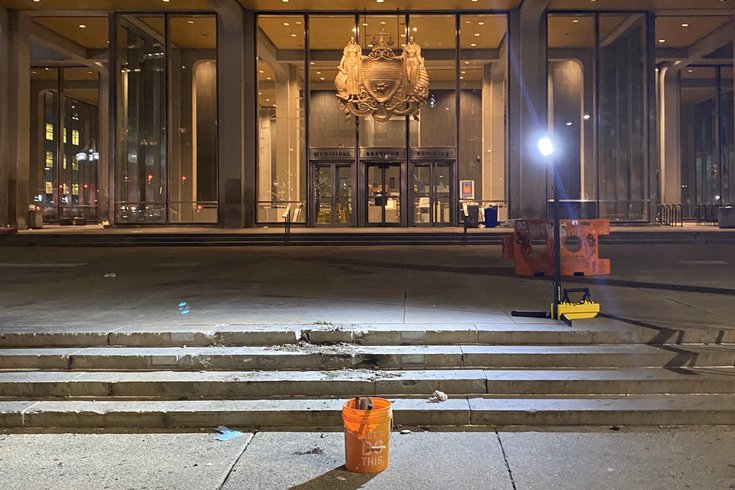 The controversial Frank Rizzo statue, located in front of the Municipal Services Building, was removed by city officials on Wednesday. Its removal comes days after a large crowd of protestors vandalized the nine-foot-statue and attempted to take it down.

"Honestly, I believe that this is the beginning of the healing process of our city," Mayor Jim Kenney said at a press conference. "This is not the end of the process. Just taking that statue down, that monument down, is not the be all and end all of where we need to go. We have a long way to go."

Many people viewed the statue as a symbol of racism and police brutality. The statue, located outside the Municipal Services Building, had been vandalized many times in recent years. Activists, politicians and others repeatedly had called for its removal.

The Rizzo statue was most recently defaced Saturday amid the protests sparked by the death of George Floyd, a black man who died at the hands of Minneapolis police last month. Protesters spray-painted the statue and attempted to topple it.

On Sunday, Kenney pledged the statue would soon be removed. After several days of widespread looting and property destruction, Kenney ordered it taken down in the middle of the night.

"The statue represented bigotry, hatred, and oppression for too many people, for too long," Kenney tweeted. "It is finally gone."

The statue represented bigotry, hatred, and oppression for too many people, for too long. It is finally gone. pic.twitter.com/30f2Skpqog

The bronze statue had been slated to be moved to a new location since November 2017. But more than two years later, it remained standing on Thomas Paine Plaza.

City officials could not find anyone willing to take the statue, Kenney said. Instead, the city intended to remove it as part of upcoming renovations to Thomas Paine Plaza. The demonstrations expedited its removal.

"There are many people in elected office and in the clergy who were asking me to accelerate the removal," Kenney said. "In hindsight, I wish we had done it earlier, but we've done it now and, hopefully, it's representative of where we're going to go."

The late Rizzo, who served as mayor between 1972 and 1980, has been scrutinized for his treatment of the city's black and gay communities during his time as mayor and police commissioner. In 2017, Council member Helen Gym called for the statue to be removed, likening it to the confederate monuments being taken down elsewhere in the United States.

In a tweet, Gym said she was "glad that wretched monument to bigotry & oppression is gone," adding that the city still must work to "end abusive policing practices."

I am glad that wretched monument to bigotry & oppression is gone. I appreciate @PhillyMayor’s powerful words. But, Philly, we got real work to do to end abusive policing practices that harm the public trust and our public safety. I’m all in on that work. #BlackLivesMattter

The statue's removal unsurprisingly prompted a wide range of reactions. Some people rejoiced at the news, while others remained critical of the city's efforts to end racial injustice. Plenty more were angry that the statue had been taken down, viewing Rizzo as a hero.

Awesome news for Philly. I am old enough to re-member Rizzo’s unrepentant and unapologetic wretched, white supremacist law of order. The Frank Rizzo statue was an insult. Goodbye and good ridden.https://t.co/Z2ZuJZ6HMx

Now it's time to #OverturnTheBudget and take that $14 m. increase for the PPD and put it into the people. Summer programs, youth activities, small business grants, etc. The city is safer when you invest in people.

This is not systemic reform. This is not going to prevent another George Floyd either in Philly or anywhere else

The nine-foot statue was commissioned in 1998 and created by Zenos Frudakis, a local sculptor best known for "Freedom" sculpture at 16th and Vine streets.

The statue has been vandalized multiple times since 2016. In December, someone defaced the statue by spray-painting the word "fascist" on Rizzo's suit jacket. In August 2017, protestors threw eggs at the statute and spray-painted "black power" onto the statue.

In 2016, activists covered the statue's head with a white hood that mimicked those worn by the Ku Klux Klan, announcing their intention to tear down the statue.

Kenney said the statue needed to be taken out of the sights of city residents. He broadly called for changes to the criminal justice system and policing. And he stressed the need to help black businesses recover from the pandemic and civil unrest.

"(Until) we realize that all Americans are equal and try to make every American equal, and treat people correctly, this country will never live up to its ideals."