A vandal spray-painted 'fascist' on the former Philadelphia mayor's statue 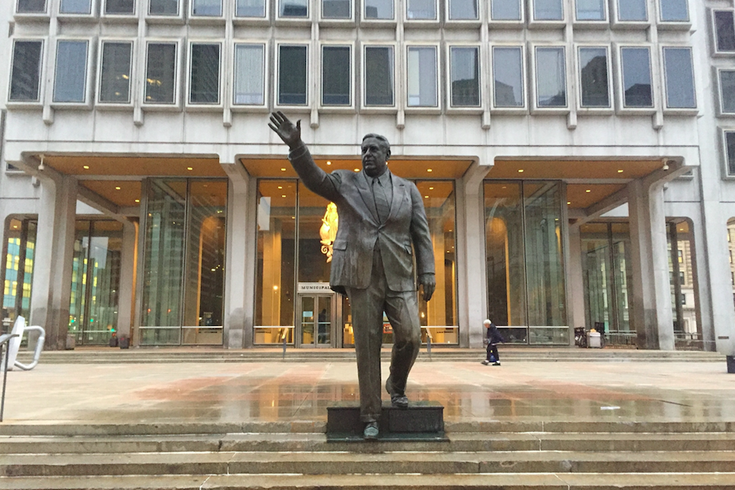 The Frank Rizzo statue, located in Center City outside of the Municipal Services Building, was vandalized by someone who spray-painted the word 'fascist' on the statue's suit jacket. The bronze statue was vandalized before in 2017.

The controversial statue of former Mayor Frank Rizzo has been vandalized once again.

This time, someone defaced the statue by spray-painting the word "fascist" on Rizzo's suit jacket, the Associated Press reports. A sticker for Eagles quarterback Carson Wentz's A01 Foundation was placed on the center of Rizzo's right palm.

The spray paint and sticker have since been removed, The Philadelphia Inquirer reports. Police currently are investigating the incident.

The late Rizzo, who served as mayor between 1972 and 1980, has come under fire for his treatment of black and gay communities during his time as mayor and police commissioner. In 2017, Councilwoman Helen Gym called for the statue to be removed, likening it to the confederate monuments being removed elsewhere in the United States.

In 2016, activists covered the statue's head with a white hood that mimicked those worn by the Ku Klux Klan, announcing their intention to tear down the statue.

The nine-foot statue was commissioned in 1998 and created by Zenos Frudakis, a local sculptor best known for "Freedom" sculpture at 16th and Vine streets.

The Rizzo statue currently sits in Thomas Paine Plaza, in front of the Municipal Services Building. The city is slated to move the statue in 2021, but a new location has not been set.