The statue of former Philadelphia Mayor Frank Rizzo was spray-painted with the phrase "black power" during the night of Thursday, Aug. 17, 2017.

The phrase "black power" was spray-painted on a statue of former Philadelphia mayor Frank Rizzo late Thursday and swiftly removed overnight, with the only remaining trace being the puddles of water surrounding it before Friday morning's rain is expected to soak the area.

The vandalism came amid recent and renewed calls for the removal of the statue, which oversees passersby at the Municipal Services Building at 1401 JFK Blvd., across the street from City Hall, where Rizzo held office from 1972 to 1980.

The calls are coming from not only social activists, but from city officials, too. This is far from the first time the subject has been brought up.

Activists have been wanting to see the statue taken down and a mural of Rizzo that sits in the Italian Market painted over, but talks have escalated over the past week.

The conversation comes as cities and towns across the country have risen up to remove any homages to Confederate leaders after Charlottesville's "Unite the Right" rally, which was initially organized to protest the removal of a statue of Confederate Gen. Robert E. Lee.

Authorities reported to a call for a "vandalism in progress" around 11 p.m. Thursday and found the words "black power" crudely painted on the statue and the phrase "the black community should be their own police" written on the steps at its base, according to Philadelphia police.

A suspect was taken into custody, but was not identified by police. There was no information available Friday morning on possible charges. Police said an investigation is "active and ongoing."

The suspect's arrest comes after a 25-year-old man from Maplewood, New Jersey, was arrested Wednesday for hurling eggs at the statue erected outside the city building in 1998.

Around 6:30 a.m., two women embraced by the Rizzo monument, one thanking the other for acting quickly. Debbie, a 50-year-old woman from the Somerton section of Northeast Philadelphia who did not want to give her last name, said she drove to Center City overnight to throw a blanket over the statue and waited until morning until city workers arrived to clean the statue. 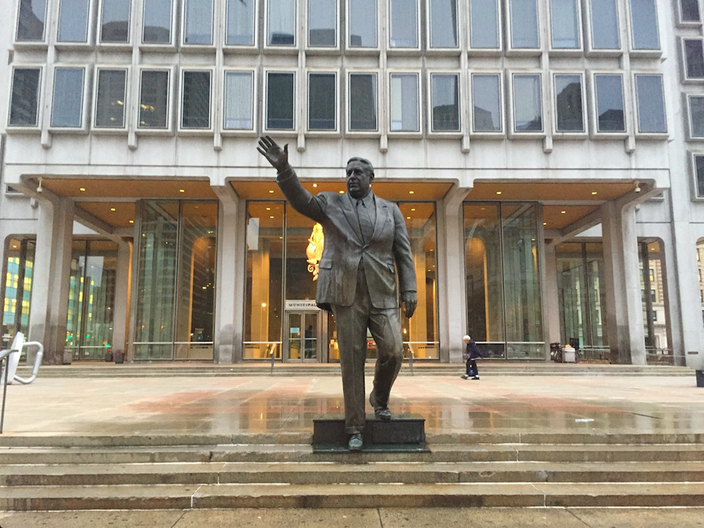 The phrase “black power” was removed off of a statue of former Philadelphia Mayor Frank Rizzo overnight.

"I wanted to make sure that it was cleaned up before the working-class citizens of Philadelphia, who do care about Philadelphia, came to work," she said.

Officials scrubbed off the spray paint in about 10 minutes on Friday, according to 6ABC.

Debbie said she heard about the vandalism around 11 p.m. and arrived at the Municipal Services Building by midnight and sat alone with the statue for hours. She emphasized that she sees every person "for who they are and not what the color of their skin is," she said she has respect for Rizzo's two terms as mayor.

She said she feels bad for the person who was arrested but doesn't feel that the late-night message represents the feelings of most Philadelphians.

"The thing is, the majority of the people who are doing this, it's just a small quantity of Philadelphia," she said. "This is not Philadelphia, so I'm glad I'm getting out here in a positive way today."

Rizzo was a former Philadelphia police commissioner who used harsh tactics to cut down on crime that gave little regard for race relations. Rizzo's obituary in The New York Times is titled, "Frank Rizzo of Philadelphia Dies at 70; A 'Hero' and 'Villain.'"

But many – including city Councilwoman-at-large Helen Gym – say the issue is much, much larger than the statue itself and that it's time for it to come down.

“We don’t get a pass because we weren’t part of the Confederacy," she told PhillyVoice reporter Brian Hickey earlier this week. "It’s very real in people’s lives to this day. The statue should come down.”

"We think now is a good time to have that conversation about the statue's future," she said. "We need to figure out the proper forum for that conversation in a serious, structured way, but now is the right time."

Despite being blocked by a barricade, Black Lives Matter protesters gathered around Rizzo's statue after a "Philly is Charlottesville" rally on Wednesday that drew hundreds.

“That's why the fight is so personal,” said Asa Khalif, a Black Lives Matter activist who has heard many stories on Rizzo's brutality from those who lived through the experience. “Everyone out there has relatives who are older … elders who say, ‘Hey, this happened.’

“We should not have to be reminded with a ‘f*** you’ every time we see that damn statue."