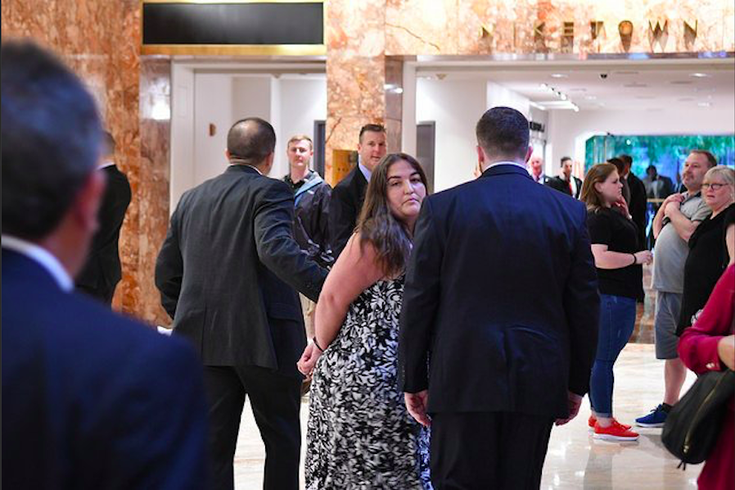 Melissa Byrne, an activist from West Philadelphia, said she was detained and banned from Trump Tower after unfurling a banner that read 'Women, Resist White Supremacy' on Tuesday, August 15, 2017. She also claimed Secret Service agents canvassed her neighborhood two days later asking if she was a threat to President Trump.

Melissa Byrne got to add a new descriptor to her Twitter profile this week.

“Banned from Trump Tower,” it read, above a bio that includes her current work as an organizer and past work as get-out-the-vote digital director for Bernie Sanders’ presidential campaign and state director for MoveOn.

She was banned after deciding to head to Trump Tower around 2 p.m. Tuesday and unfurl a banner that read, in part, “Women, Resist White Supremacy.”

Suffice it to say, this did not go over very well inside the Fifth Avenue building that the sitting president used to call home.

On the day of Donald Trump’s combative press conference about the violence in Charlottesville, Virginia, Byrne said that she was grabbed, detained, questioned by “eight officers from the NYPD and Secret Service” and banned from the building. That’s not all, though.

Apparently, representatives of the latter law enforcement entity showed up in her Cedar Park neighborhood in West Philadelphia to ask questions of neighbors on Thursday.

While a call to the Secret Service’s field office in Philadelphia wasn’t immediately returned Thursday night, Byrne’s neighbors told her that they’d gotten knocks on their doors during the day.

“They were asking if I’m a threat to the president,” she said that neighbors told her, including one she didn’t know who reached out with a Facebook message. “I’m a pacifist, a non-violent activist. I’m zero threat. I mean, it’s really ridiculous.”

She also noted that one neighbor told her that, when questioned, she responded, “The real threat is in the White House.”

For her part, Byrne said she didn’t see the Secret Service agents in her neighborhood and took to Twitter to let the world know what had happened.

So @SecretService is canvassing my neighbors. Of course I go outside to see if I can see them. Make sure to grab some good Ethiopian.

So going to FOIA my @SecretService file in a few months. I wanna see how many of my 🔥🔥🔥 tweets are screen capped.

I have the best neighbors. @SecretService report will be that West Philly thinks @realDonaldTrump is a racist jerk more or less.