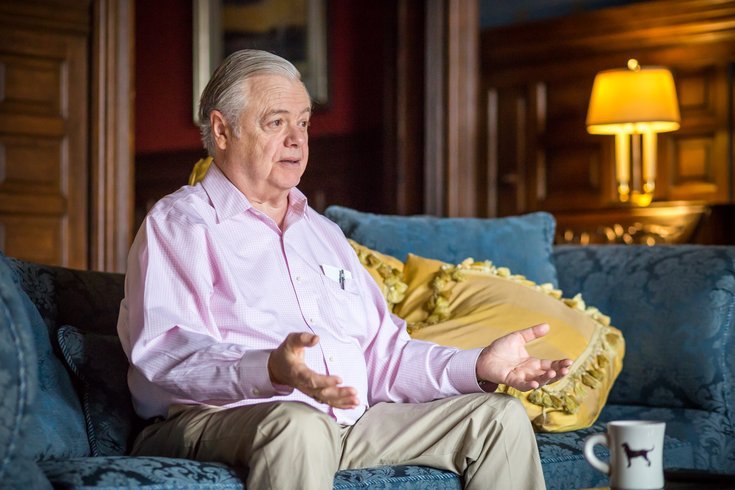 Philadelphia Mayor Jim Kenney deflected a personal and profane rebuke from former state Sen. Vince Fumo, who took to Facebook on Thursday to call the mayor "hypocritical" for his removal of the Frank Rizzo statue this week.

A spokesperson for Kenney said late Thursday the mayor was too busy to engage with his former boss and political ally, but did call Fumo "rambling" and "irrelevant."

Both men are from South Philly. Fumo, once a force in Philadelphia and Pennsylvania politics, fell from grace after a 2009 conviction on federal corruption charges. In the late 1970s and 80s, Kenney worked for Fumo, rising to the level of chief of staff before running for City Council in 1991, with the support of his mentor.

Since his release from prison in 2009, Fumo, 77, has been largely removed from Philadelphia politics.

But on Thursday, Fumo shared a Facebook post slamming Mayor Kenney for his posture toward the controversial statue. The post claims Kenney was part of the original push to install the Rizzo statue at Thomas Paine Plaza in 1998.

I wrote this response on Jim Kenney's FB page last night when he bragged about taking down the Rizzo statue. I didn't...

"Jimmy, you worked for me for decades and yet every day you never cease to amaze me," Fumo wrote. "You fought for this statue to be at that very location. How hypocritical of you now to remove it saying that it 'represented bigotry, hatred and oppression for too many people, for too long ...' Wow, did I miss something, did that just happen or were the feelings towards Rizzo the same back when YOU championed this very same statue? If they were why did you support it then and not now?"

Fumo's post insists that Fumo, himself, has always opposed Frank Rizzo and many of his policies.

"I was the only South Philadelphia Italian elected official to ever oppose (Rizzo)," Fumo wrote.

The Democrat disparaged Kenney for taking the statue down in the middle of the night. He claimed the mayor "betrayed the trust" of Philadelphians and even apologized to the city "because I am the ultimate cause of you being where you are today."

Fumo's other recent Facebook posts are more in line with his history as a liberal Democrat. On Tuesday, another post from Fumo called President Donald Trump and his family an "international disgrace and embarassment."

The Mayor's Office responded to a request for comment on Fumo's post — which has been shared more than 4,000 times — on Thursday night.

"The removal of the statue had nothing to do with Mayor Kenney or his feelings about Frank Rizzo at any point in time — it was a response to the calls that Black Philadelphians and many others have been making for years," the spokesperson said. "Mayor Kenney is far too busy doing his job and working to address the real issues facing our city to respond further to the rambling Facebook comments of someone as irrelevant as Vince Fumo."

On Friday, after seeking clarification on Kenney's role as a councilman when the statue was installed on the steps of the Municipal Services Building, the spokesperson said, "The mayor has no recollection of any involvement with the placement of this statue. He thinks Fumo’s remarks are off base but does not wish to comment further on them."

The Mayor's Office also noted, significantly, that Kenney lobbied for years for the Octavius V. Catto statue now outside City Hall. Catto was a voting rights and civil-rights pioneer in Philadelphia during the 1800s. His statue is the first on city-owned property honoring an African American.

On Friday, BigTrial.net's Ralph Cipriano covered Fumo's explosive Facebook post. Cipriano wrote Fumo's 2017 biography, "Target: The Senator: A Story About Power and Abuse of Power." In the article, Cipriano writes that as a councilman at-large, Kenney voted in favor of the Rizzo statue. The original plans were to put it in South Philly, before it ended up at Thomas Paine Plaza, which Kenney supported, according to the report.

Mayor Kenney's views on Rizzo are somewhat confounding, based on other anecdotes. In a 2015 interview with WHYY, former Fumo staffer Howard Cain recalled Kenney's visceral rage toward Rizzo.

Kenney is known to have a temper.  One incident stands out to Howard Cain.  It was the early 90’s, and Kenney was still working for Senator Fumo.  Fumo’s political rival, former Philadelphia mayor Frank Rizzo, had a daily radio show, and Kenney was asked to make a tape recording of each one.

“Every day at 3:00, the ex-mayor would come on, and by 4:00, Jim would become so angered at what the ex-mayor was saying, the office staff knew not to bother him,” says Cain.  Between 3:00 and 5:00, you just let him be because he was working himself up into a real fit of anger.  And one time I saw him throw a beeper against a wall with such force that it lodged in the wall.”

And yet, Cipriano also reported that Kenney was a co-sponsor of a bill to rename the Municipal Services Building in Rizzo's honor, a proposal the Rizzo family did not support. They felt the statue was enough.

For many Philadelphia residents, the Rizzo statue came to be a painful symbol of police brutality and racial oppression under Rizzo's reign, first as police commissioner and later as mayor in the 1960s and 1970s.

Kenney, elected mayor in 2015, signaled in 2017 that the statue would be relocated pending a decision from Philadelphia's Art Commission. The issue dragged on for nearly three years, even amid acts of vandalism, until the death of George Floyd became the tipping point.

"I think it's a victory for all of us," Kenney said earlier this week. "Nothing against (Rizzo) personally. I was not a fan of the statue. I've said it before. There's no mayor that has a statue ... I don't want a statue of me, ever, anywhere, not that I think anyone would care to put one up, but I don't think that's appropriate. I think it was kind of foisted on the city 20 years ago. We're moving on from that era."

‪The Frank Rizzo statue represented bigotry, hatred, and oppression for too many people, for too long. It is finally gone.‬

In 2015, Kenney told Philadelphia Magazine he hadn't spoken to Vince Fumo in years. He had distanced himself from his former mentor around the time of the federal indictment in 2007 and had seemingly grown tired of the association. Kenney was subpoenaed in the Fumo investigation but was not connected to any wrongdoing.

Fumo was convicted in federal court of 137 charges that he defrauded Pennsylvania and several charities of $3.5 million for his own personal benefit. Investigators said Fumo used his staff to remodel his mansion and hired a spy to keep tabs on his ex-wife, among other crimes. He spent four years in prison and was released in August 2013.

In an interview with PhillyVoice, around the time Cipriano's book was published, Fumo defended his record and reflected on his trial. He said he missed politics, but was optimistic about the future.

"I'm surviving. I'm not bitching," Fumo said at the time.