Frank Rizzo mural in Italian Market to be removed, replaced with new artwork 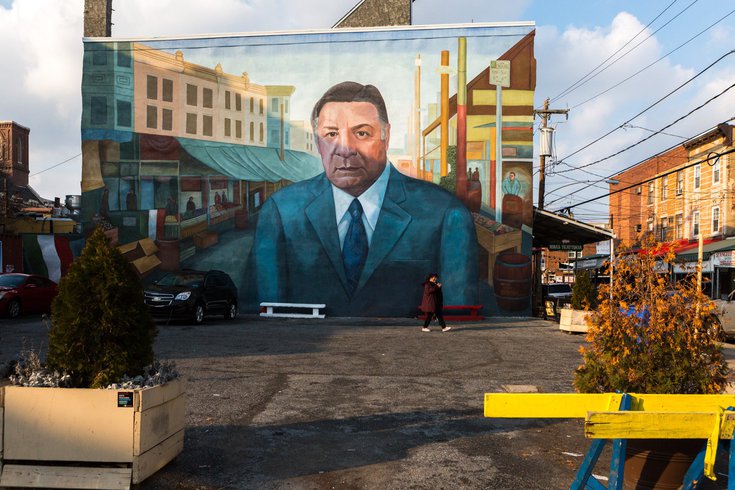 Mural Arts Philadelphia called for the Frank Rizzo mural in South Philly to be taken down.

Following the removal of former Philadelphia Mayor Frank Rizzo's statue from the steps of the Municipal Services Building early Wednesday morning, the Frank Rizzo mural located in the Italian Market of South Philly will be removed and replaced by a new mural.

The announced was made on Wednesday evening by the South 9th Street Italian Market on social media.

The South 9th Street Shopping District, the property owners, and Mural Arts Philadelphia are now working on a new mural "that better represents the fabric of S. 9th Street," according to the announcement. The mural will turn into a blank canvas in the meantime.

"We agree that it is time to replace this long-standing piece of art to begin to heal the Black community, the LGBTQ community and many others," the organization said.

"We see you. We hear you. We stand with you. Our sympathies go out to the Floyd family. Our hearts are with everyone that has suffered senseless loss."

A statement from 9th Street. pic.twitter.com/f9cYdeypNE

Earlier on Wednesday, Mural Arts Philadelphia called for the decommissioning of the mural.

The curators of the city's public artwork said on social media that it "has decided to cease all involvement with the mural" effective immediately and "will no longer be involved in the repair or restoration of the mural."

"The Frank Rizzo mural in South Philadelphia has again become a target for defacement amidst this national chapter of pain, grief, and anger over the recent death of George Floyd and the systemic racism plaguing our country," the organization said.

Floyd, a black man, was killed May 25 while in the custody of Minneapolis police after Officer Derek Chauvin knelt on Floyd's neck for nearly nine minutes as three other police officers watched. All four police have been fired from the Minneapolis department. On Wednesday, the charges against Chauvin were increased to second-degree murder. The other police officers were charged with aiding and abetting murder.

Floyd's death has sparked days of demonstrations and protests in cities across the United States drawing attention to problems in the country with police brutality and systemic racism.

"We do not believe the mural can play a role in healing and supporting dialogue, but rather it has become a painful reminder for many of the former Mayor's legacy, and only adds to the pain and anger."

Rizzo was Philadelphia police commissioner and then mayor in the 1960s and 1970s. He used race to divide the city and during his leadership, the police department was particularly brutal in its treatment of the city's black and gay residents.

Mural Arts Philadelphia said maintaining and repairing the mural is inconsistent with the organization's mission, and it "would support a unifying piece of public art in its place."

As Rizzo's statue in Center City was removed early Wednesday, the South Philly mural was vandalized overnight. This is not the first time that the mural has been defaced.

And while the Rizzo sculpture was being moved, @PhillyPolice get 911 call thay Frank Rizzo mural in South Philadelphia was vandalized overnight again. There have been severel incidents of paint being tossed on it previously @FOX29philly pic.twitter.com/ZjzNedbutv

Similar to the statue, there had been calls for Rizzo's mural to be removed for several years due to the racism and police brutality it represents for many.

Mural Arts Philadelphia started taking recommendations from residents on what to do with the mural in 2018, and a petition emerged calling for a mural of Philadelphia Flyers' mascot Gritty to replace Rizzo.

Philadelphia Mayor Jim Kenney had said Sunday that the statue would be removed soon and that the protests had expedited the timeline for taking it down.

The bronze statue had been slated to be moved to a new location since November 2017. But more than two years later, it remained standing on Thomas Paine Plaza. City officials could not find anyone willing to take the statue, so the city intended to remove it as part of upcoming renovations to the plaza.