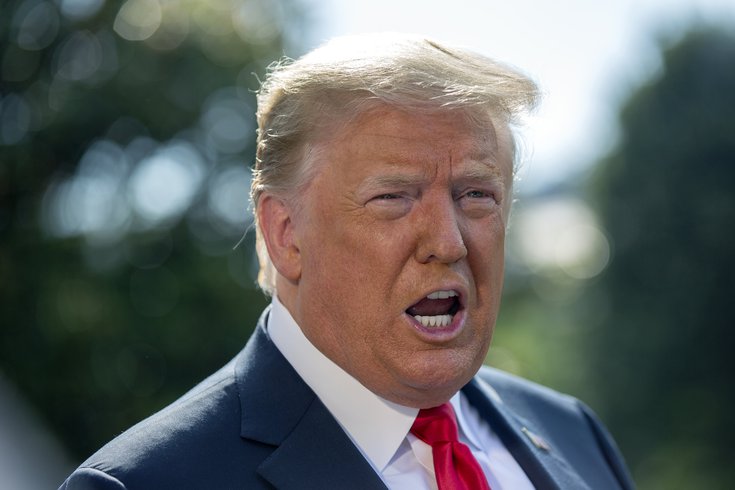 President Donald Trump said he expects Americans will receive another round of coronavirus stimulus checks.

Americans should expect a second COVID-19 stimulus package in the months to come, President Donald Trump said Monday, calling the next round of relief "very generous."

Trump was asked specifically about the possibility of additional stimulus checks during an interview with Joe St. George, the national political editor for Scripps. Most Americans received $1,200 in relief earlier this year through the $2.2 trillion CARES Act.

VIDEO: President Trump commits to 2nd stimulus. He says details would be announced in the coming weeks. The President would not tell me how much of a check Americans will receive. pic.twitter.com/Abd5E8P3Au

"I have a lot of viewers in Florida, Ohio, Wisconsin, Michigan who are still struggling economically, sir," St. George said. "They spent all of that first stimulus check. Are you going to get them a second stimulus check?"

The president's words came amid ongoing debate in Washington about the form that future economic relief will take.

The House of Representatives has approved the $3 trillion HEROES Act stimulus bill, which would include another round of $1,200 checks. But the Republican-controlled Senate has sought to provide relief through other means.

Senate Majority Leader Mitch McConnell and other Republican leaders have opposed another round of stimulus checks, calling them expensive. Instead, they argue that people should be incentivized to return to work.

One proposal from Rep. Kevin Brady, the top Republican on the House Ways and Means Committee, would convert two weeks of unemployment benefits into a $1,200 back-to-work bonus available to people returning to the workforce. There also have been proposals for a tax deduction for domestic tourism and payroll tax waivers.

As Forbes pointed out Monday, Trump shifted the conversation with St. George to the word "package" instead of "checks."

Any final legislation to shore up a second round of direct coronavirus relief likely won't come until the end of July at the earliest, when Congress returns from recess. Trump said that he expected a resolution to come in the next couple of weeks.

The debate surrounding additional economic relief comes as COVID-19 cases surge in various parts of the country that have reopened, threatening the progress made during months of lockdowns. Additionally, the extra $600 per week being provided through federal unemployment benefits is set to expire on July 31.

Stimulus proposals of various kinds have been floated over the past month or so.

Sen. Kamala Harris of California, joined by fellow former Democratic presidential candidate Andrew Yang, has called for a Monthly Economic Crisis Support Act, which would provide $2,000 monthly to anyone earning less than $120,000 per year. Married couples who file jointly would receive up to $4,000. A maximum of three dependents would get $2,000 each.

Dallas Mavericks owner and businessman Mark Cuban has proposed a $1,000 check for Americans every two weeks, while Yang separately suggested a "Freedom Dividend" providing $1,000 per month in universal basic income for life.

Given the resistance in Congress to approve a second round of stimulus checks, these proposals seem unlikely to gain traction.