Philly residents call for Taney Street to be renamed 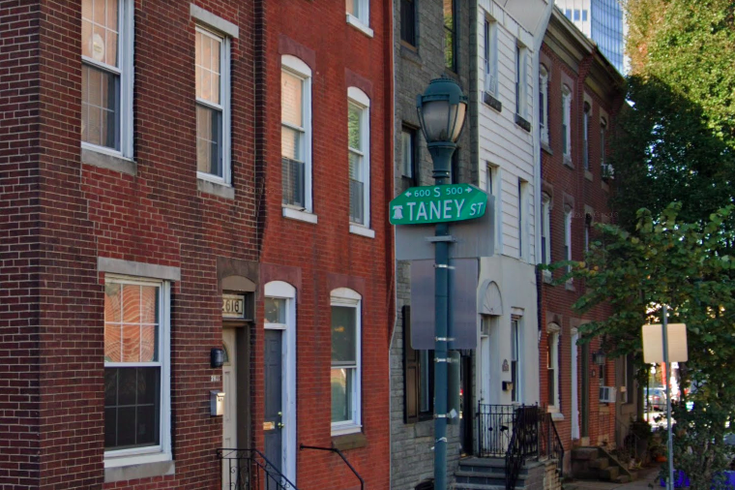 Taney Street in Philly has been named after the former Supreme Court justice since 1858.

A petition has been launched by Philadelphia residents calling for the removal of former Supreme Court chief justice Roger Taney’s name from the city street that bears his name.

The campaign, which has been organized by the community association Fitler Square Neighbors, states that the street should be changed “to honor someone who has united the country rather than divided it, and who recognizes the contributions of all Americans.”

Along with the petition, a rally was held at Markwand Park—a part of Schuylkill River Park in Fitler Square—on Saturday to bring attention to the movement. The event was put on by Fitler Square Neighbors, as well as the Rename Taney campaign and the local community organization 5th Square.

The street was named after Taney in 1858. The southern portion of the street runs through Fitler Square, while the northern portion stretches from Fairmount to Brewerytown.

Taney has come under fire for writing the majority opinion of the U.S. Supreme Court’s 1857 decision in the Dred Scott v. Sanford case, which held that African-Americans had no standing in court because they were not and could not be citizens—even if they were free.

“There is just no reason for this divisive figure to continue to be celebrated in our city,” the petition organizers wrote.

Baltimore and Annapolis, Maryland have removed statues of the former Supreme Court justice, according to the petition organizers.

The movement to take down Taney’s name is the latest in a string of actions taken by city residents and officials to reassess statues, monuments, and murals honoring controversial figures across Philadelphia.

A statue paying tribute to former Philly Mayor Frank Rizzo outside of the Municipal Services Building in Center City was taken down earlier this month after it became a focus of the protests that have taken place in the wake of George Floyd’s death in May.

Additionally, a mural honoring the former mayor and police commissioner in the Italian Market of South Philly was painted over earlier this month too. The blank canvas that replaced the mural will soon be turned into new artwork.

Both the statue and mural have served as symbols of racism and police brutality for many residents. The late Rizzo has been scrutinized for his treatment of the city's black and gay communities during his time as mayor and police commissioner from 1967-1980.

Similar actions are being considered for the Christopher Columbus statue that sits at Marconi Plaza, as well as the Columbus Monument at Penn’s Landing.

The city ordered the South Philly statue be boarded up until its fate is determined, while the Delaware River Waterfront Corporation has covered the base of the monument at Spruce Street Harbor Park until a final decision is made.

Monuments honoring the Italian explorer have fallen under greater scrutiny in recent weeks. Some cities, including Camden, have removed them, viewing them as symbols of oppression committed against indigenous people. Supporters of the statues claim they are a historic marker and symbol of Italian heritage.

“While these are symbolic actions, they strongly demonstrate that our city has the potential to evolve into one where everyone feels they are not only welcome but valued,” the petition organizers wrote.

The petition calling for the removal of Taney’s name can be viewed here.