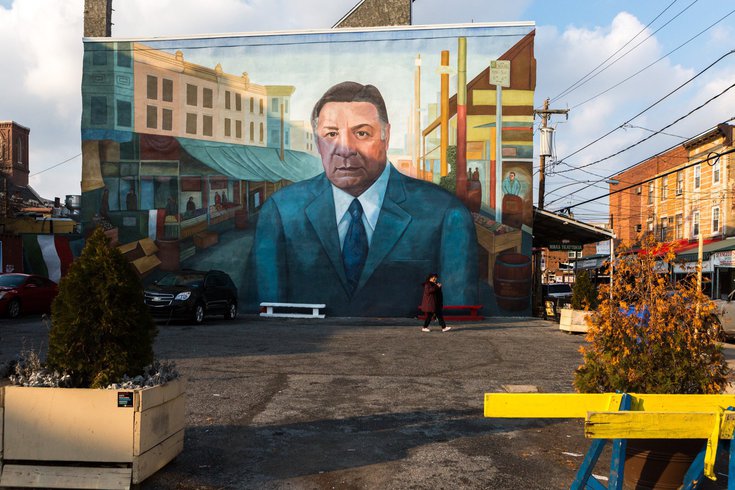 The Frank Rizzo mural in the Italian Market has officially been removed.

The Frank Rizzo mural in South Philly is officially no more.

The artwork was taken down and painted over with a blank canvas in the Italian Market early Sunday morning. It will eventually be replaced by a new mural—which is being worked on by the South 9th Street Shopping District, Mural Arts Philadelphia, and the property owners who gave consent to the removal.

The removal of the mural was made official by Mural Arts on Sunday morning.

“Mural Arts is grateful that we were able to work with the owner toward this positive resolution, and look forward to collaborating with the community on a new mural project that can reflect the fabric of S. 9th Street,” the organization wrote.

“We know that the removal of this mural does not erase painful memories and are deeply apologetic for the amount of grief it has caused. We believe this is a step in the right direction and hope to aid in healing our city through the power of thoughtful and inclusive public art.”

The process for creating a new mural and selecting an artist will begin in the coming weeks, and the community will play an active role in helping out, Mural Arts said. More announcements about further steps taken will be coming soon, and the organization is accepting donations for the new project on its website.

“We thank all who voiced their opinions and are hopeful that this may be one more step towards true equality and social justice,” the organization wrote.

6/7/2020 Statement from Mural Arts Philadelphia regarding the Frank Rizzo mural in South Philadelphia: As of Sunday...

When the South 9th Street Italian Market announced on Wednesday night that the mural of the former Philadelphia mayor and police commissioner would be removed, it said that the blank canvas would remain in the interim until a new mural was decided upon.

The mural of former #Philadelphia mayor and police commissioner Frank Rizzo is no more. This morning’s painting project comes just days after a statue of Rizzo was removed from the steps of the city’s Municipal Services Building. @NBCPhiladelphia pic.twitter.com/ZWqLNwWrNa


The controversial Frank Rizzo mural in The Italian Market at S 9th and Montrose St is currently being painted over by Mural Arts. @FOX29philly pic.twitter.com/b5xpNQPvu8


#BREAKING: After the Frank Rizzo statue was removed from the front of the Municipal Services Building last week, the Rizzo mural in the Italian Market is now gone. Crews painted over it early this morning. We’ll have updates on @CBSPhilly. pic.twitter.com/EF0841kQco


This photo by @davidmaialetti of Frank Rizzo's eye watching his own mural obliteration in South Philly this morning is destined to become iconic pic.twitter.com/JPVDtmps3q


Had to come see this for myself ... the #FrankRizzo mural in the Italian Market painted over early this morning. A small portion of the original remains visible at the top right corner. #philly pic.twitter.com/5oTLhhpFg0

Before a decision over the mural was made, Mural Arts had called for the decommissioning of the artwork. The curators of the city's public artwork said that it had nullified all involvement with the mural effective immediately and would no longer be involved in the repair or restoration of the mural.

Before the mural was removed, Rizzo’s controversial statue which sat at the steps of the Municipal Services Building in Center City was taken down on Wednesday.

The removal of both comes in the wake of George Floyd’s death on May 25. Floyd, a black man, was killed while in the custody of Minneapolis police after Officer Derek Chauvin knelt on Floyd's neck for nearly nine minutes as three other police officers watched.

Floyd's death has sparked demonstrations and protests over the past week in cities such as Philadelphia to draw attention to issues such as police brutality and systemic racism across the country.

Rizzo, who was Philadelphia police commissioner and then mayor in the 1960s and 1970s, used race to divide the city. During his leadership, the police department was particularly brutal in its treatment of the city's black and LGBTQ residents.

There had been calls for the removal of both Rizzo’s statue and mural for several years due to the racism and police brutality it represents for many.

Mural Arts Philadelphia started taking recommendations from residents on what to do with the mural in 2018, and a petition emerged calling for a mural of Philadelphia Flyers' mascot Gritty to replace Rizzo.

Philadelphia Mayor Jim Kenney said last week that the statue would be removed soon and that the protests had expedited the timeline for taking it down.

The bronze statue had been slated to be moved to a new location since November 2017. But more than two years later, it remained standing on Thomas Paine Plaza. City officials could not find anyone willing to take the statue, so the city intended to remove it as part of upcoming renovations to the plaza.