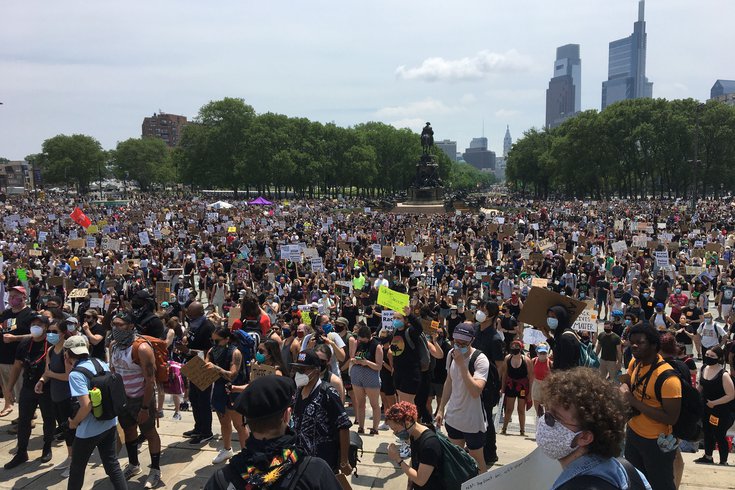 Demonstration participants gathered on the Philadelphia Museum of Art's steps Saturday to protest police brutality and racism in the eighth day of Philly demonstrations following the killing of George Floyd.

Thousands of peaceful protestors gathered on the steps of the Philadelphia of Art Museum Saturday to continue demonstrations against police brutality and racism.

Saturday marked the eighth day of protests since Philadelphia's demonstrations began one week prior. Unrest broke out in cities nationwide after George Floyd, an unarmed Black man, was killed by Minneapolis police officer Derek Chauvin while being arrested in late May.

Participants arrived well before noon for Saturday's Philly protest officially which began at 12 p.m. that was scheduled to extend to 2 p.m. Once thousands had gathered on the steps, they began marching towards Philadelphia City Hall.

A list of demands from the protest organized in part by the Party for Socialism and Liberation included the resignation of Police Commissioner Danielle Outlaw following the tear gassing of peaceful protestors, which occurred at protest earlier this week.

Protestors also called for the defunding and demilitarization of city police by Philadelphia Mayor Jim Kenney and City Council, as well as the withdrawal of the National Guard from the city by Gov. Tom Wolf.

Members of the National Guard were waiting in Center City, where they had been stationed since this morning and on days earlier this week. About 500 additional troops, along with tanks, were sent to the city after protests, riots, and looting took place last Saturday.

Most of the forces seemed to be positioned in places where violence occured last weekend, where protestors set fire to police vehicles and attempted to tear down the statue of former Mayor Frank Rizzo.

The City of Philadelphia also installed public toilets, and handed out a limited amount of water and face masks.

Later in the day, part of the main protest made its way back to the steps of the Philadelphia Art Museum. Other parts of the group remained around Center City, where Philly's urban cowboys rode on horseback, a couple got married, and Police Commissioner Danielle Outlaw spoke with some protestors.

For the eighth straight day in a row, Philadelphia officials have set a curfew in place.

Starting at 8 p.m. Saturday night, city residents are not allowed to leave their homes unless to go to work, seek medical attention, for fear of their safety or seek help from the police.

City residents outside after curfew may be arrested by police. The Philadelphia police department has arrested 703 people between Saturday and Wednesday as a result of George Floyd protests.

Social media continues to be a connecting force for the current nationwide protests, from being used to share information on protest to holding police accountable for their interactions with protest attendees.

It's being used by Philadelphians early Saturday to show the large crowds of protestors in attendance.

Protestors donned masks in light of the ongoing coronavirus pandemic.

Speeches were made throughout the day, and at City Hall while armed members of the Pennsylvania National Guard stood behind a barrier.

More images of police and members of the National Guard were shared.

Kenney was among the thousands who joined in the peaceful protests on Saturday.

This week has been humbling. It has shown me—someone who considers themselves to be progressive and an ally—that there is a great deal more for me to learn.

Black voices have been silenced for too long. We must hear those voices and act on their demands.
#BlackLivesMatter pic.twitter.com/I3r4JDqm1h

Elton Brand, Tobias Harris, Matisse Thybulle, and Malcolm Jenkins were some of the current and former Philly professional athletes to march as well on Saturday.

“Right now is when we want that change. Our voices will no longer be ignored.”

Malcolm Jenkins reflects on peacefully protesting in front of his locker two years ago today in Philly. @brgridiron