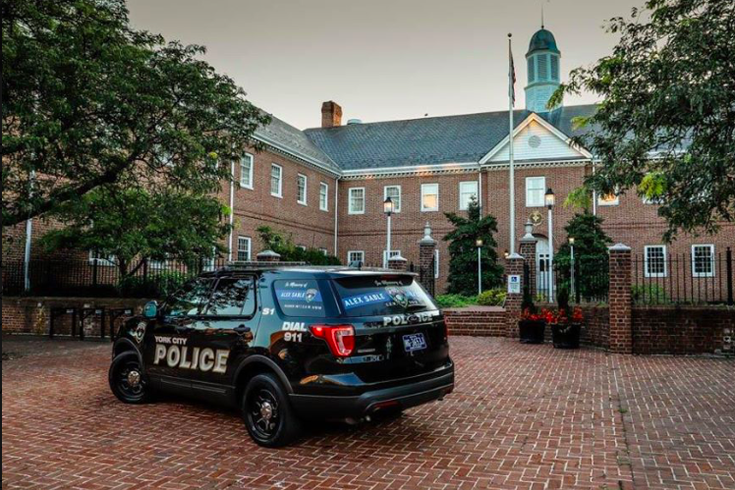 A York City police officer is being investigted by his department for reenacting the death of George Floyd while off-duty at a party recently, city officials said.

A York City police officer is being investigated by his department after he allegedly acted out the death of George Floyd while off-duty at a party last weekend, city officials said.

The incident occurred last Saturday at a party for a relative of Officer Clayton Swartz, according to the York Dispatch.

Three women who were invited to the party, all in their early 20, observed Swartz put his knee on the neck of a another man who was reclined on a couch.

"He starts saying, 'Can you breathe? Are you dead yet?'" said India Maldonado, one the three women who reported the incident to police.

Another witness said the man underneath Swartz's knee was "pretending to die" as the two men laughed hysterically.

Two of the three women who spoke to the York Dispatch about the incident were the only two black people at the party in Spring Garden Township. The women said they had previously always felt safe and respected at their friend's home.

Floyd's death in the custody of Minneapolis police on May 25 sparked protests and civil unrest across the United States.

Video of Officer Derek Chauvin pressing his knee on Floyd's neck for nearly nine minutes, even as Floyd pleaded to breathe, became another chilling testament to police brutality against African Americans. Chauvin faces second-degree murder and manslaughter charges. Three other officers at the scene were charged Wednesday with aiding and abetting murder.

The women at the party in Spring Garden Township said Swartz had identified himself as a police officer during the evening. When they told Swartz and the other man their act was not funny, Swartz ignored them and continued, the York Dispatch reported.

"I couldn't believe this man, who is supposed to protect and serve me and my community, was able to act out something so horrific ... something so controversial and wrong," Maldonado reportedly said.

York City Mayor Michael Helfrich said Swartz has been removed from public service and placed on desk duty amid an internal affairs investigation. He lamented that there was no video of the incident.

Regarding the York City Police Officer accused of involvement in a reenactment of the George Floyd public murder by...

"If we had video of what he is accused of, he could be gone already," Helfrich said. "Instead we have to follow a lengthy investigation process. A city is not like a business. I can't just fire someone based on an allegation without an investigation. This is the best I can do for now."

Swartz was hired by the York City Police department in June 2017. Police Commissioner Osborne Robinson confirmed that he is under investigation for general misconduct. Punishment can range from counseling to termination.

"If that allegation is true, it is extremely disturbing and unacceptable," Robinson reportedly said.

A public memorial service for Floyd, who was 46 years old, is scheduled to take place in Minneapolis on Thursday.