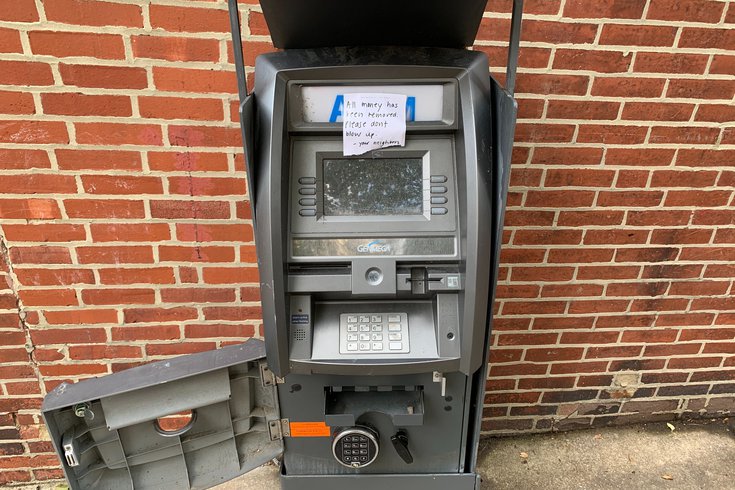 An ATM in Philadelphia's Fairmount neighborhood has a sign that reads: "All money has been removed. Please don't blow up - Your Neighbors." Philadelphia police and the ATF are investigating about 50 ATM explosions in the city since May 30.

Outlaw said authorities have been called to 135 explosions in Philadelphia during the past several days, but there is a clear pattern of targeting ATMs.

"As best we can determine at the moment, the vast majority of these machines were damaged or opened by the use of M250 to M100 illegal explosive devices," Outlaw said.

M devices, ranging from M100s to M1000s, are commonly called quarter sticks of dynamite and are not made commercially. Prosecution connected to their use in these cases could include weapons of mass destruction charges in Pennsylvania, said Brendan O'Malley of the state attorney general's office.

Investigators said the defendant was allegedly advertising sticks of dynamite on Instagram. An undercover agent who contacted Crump received a voicemail from him detailing the effective use of dynamite to breech ATMs, prosecutors said. Crump allegedly told the agent he blew up several ATMs on June 1 and stole approximately $8,500 from one machine.

Crump is being charged with one count of possession of weapons of mass destruction, one count of risking a catastrophe, one count of criminal use of a communication facility, and related offenses.

Evidence from multiple ATM explosions has been sent to labs for analysis and review, according to Brian Schmidt, acting special agent in charge for Philadelphia's ATF field division.

On Tuesday morning, a 24-year-old man died in Kensington after targeting an ATM outside a sports bar. Similar explosions have been reported in Southwest Philadelphia, North Philadelphia and Fairmount, among other locations.

"Most of these ATMs don't have money in them and we encourage those businesses that do have these private ATMs ... to ensure that the money is removed," Outlaw said.

Residents across Philadelphia have reported hearing unusual explosions and loud booms in recent days. They've rung out starkly amid the protests for George Floyd, whose death in the custody of Minneapolis police has invigorated action to confront systemic racism in the United States.

As looting and property damage subvert the central conflict, speculation has grown on social media about the source of the alarming noises. Some have questioned whether they are connected to the ATM explosions or are law enforcement tactics.

The police/paramilitary are using psychological op methods in Philly where they blast loud sounds at night to create artificial stress and disrupt sleep. Military technique used since Vietnam. They pump in sonic boom/explosion sounds to break the will of would be protesters https://t.co/gchtuzZ7R8

Even outside the city, in Abington Township, one of these events was captured on camera.

Loud explosion caught on camera in Jenkintown, PA a suburb of Philadelphia pic.twitter.com/2T2bZqsYcT

The Abington Police Department confirmed the incident to PhillyVoice, explaining that it was a controlled detonation of a potentially suspicious backpack. Given the climate of unrest, police called in the bomb squad to x-ray the bag and detonate it near the Huntingdon Valley Shopping Center.

The contents of the backpack were found to be non-threatening belongings and personal effects. Their owner, who Abington police were able to identify, will not be getting them back, needless to say.

In Philadelphia, police told PhillyVoice on Wednesday they have "no reports in reference to sonic booms" or police use of artificial noise blasted through loud speakers, but would provide updates if any new information comes to light.

A spokesperson for the Pennsylvania National Guard, which remains stationed in Philadelphia, said there is no truth to the notion that its trucks are emitting noise to disperse crowds.

"We don't have equipment like that or anything that's intentional for just generating noise," said Lt. Colonel Keith Hickox, a public affairs officer for the Pennsylvania National Guard. "I can say with 100% certainty that our vehicles are for transportation only. They are tactical taxis — A-to-B transportation."

LRADs – or Long-Range Acoustic Devices – are audio technology systems sometimes used by law enforcement, government, defense agencies and security companies for the purpose of dispersing crowds and transmitting warnings. Hickox said the National Guard in Philadelphia is not using LRADs in Philadelphia.

The technology was first used for protests in the United States during the Pittsburgh G20 Summit in 2009. In that instance, the sound deployed was a shrill alarm capable of causing hearing damage at close range. Any type of audio file could conceivably be used, including low-frequency "boom" sounds, in theory.

Most of the National Guard's role in Philadelphia has been to hold static positions at strategic locations, allowing Philadelphia police to deploy their resources where needed, Hickox explained.

National Guard helicopters "can be noisy," but don't make sounds like explosions or "sonic booms," he added.

For now, the best explanation for these "booms" may actually be dozens of attempts to blowup ATMs, as astonishing as that sounds.

Some of the noises have been singular blasts. Others have come in succession. Some are followed by sirens. Others disappear into the day or night, seemingly unanswered.

One Twitter account that claims to be following these incidents in Philadelphia posted a video of an alleged attempt to explode an ATM near the intersection of B Street and Allegheny Avenue in Kensington.

I witnessed multiple people attempting to blow up ATMs all throughout the city. Want proof? #phillyexplosions #phillyriots #protests2020 pic.twitter.com/4mKqY55yzu

Two other accounts have shared videos showing attempted ATM explosions in Philadelphia, as well as another in New York City.

Surveillance video showing the explosion from one of several ATMs that were vandalized around #Philadelphia. @NBCPhiladelphia @Telemundo62 pic.twitter.com/JEc7v9oOjM

The noises in these videos sound similar to the "booms" heard in neighborhoods across Philadelphia.

"We are aware of the noise complaints but are not using artificial noise to disperse crowds," a Philadelphia Police Department spokesman said in an email. "The noise could be related to the ATMs, but, we can't definitively confirm that."

“Over the past several days in Philadelphia, we have seen brave, courageous people practice their constitutional right to peacefully protest — all in the name of justice,” said Attorney General Shapiro. “I will not let violence hijack this righteous cause, at this important moment, when thousands of people in our streets are calling for change. We will not allow this movement to be co-opted by opportunists or people who cause violent distractions.”

Arrests numbers mount as police cut down on looting

Commissioner Outlaw reported there have now been 716 total arrests in Philadelphia since Saturday afternoon. A breakdown of those arrests was provided by the department in a tweet.

The commissioner noted some progress in reducing looting events across the city.

"The looting and the vandalism are beginning to slow down," Outlaw said. "As we get more resources that we can delpoy very specifically without having to chase a radio for calls for service, we can assign them very strategically to the areas we know either have been hit, or have not been hit yet."

The department's Internal Affairs division continues to investigate whether officers in the 26th District police allowed armed vigilantes to gather in Fishtown on Monday evening. The petition with more than 10,000 signatures has called for the resignation of 26th District Captain William Fisher. Outlaw said she did not plan to recommend Fisher's removal.

"I'm quite certain that they are going to be quite upset with either how I have handled specific instances or just this situation in general," Outlaw said. "There's going to be a lot that comes out of this, but right now we've made clear that we have our Internal Affairs division available. For now, I'm not seeking to remove anyone from their position."

A curfew was enacted again from 6 p.m. Wednesday night to 6 a.m. Thursday morning. A public memorial service for Floyd is scheduled to take place from 11 a.m.-1 p.m. on Thursday.

"I strongly believe that these developments are in the interest of justice for Mr. Floyd, his family, our community and our state," Ellison said.

Philadelphia continues to see encouraging signs in the battle against the coronavirus pandemic.

The city reported 126 additional confirmed cases of COVID-19 on Wednesday, bringing the total to 23,160. There were 252 cases reported Monday and 153 on Tuesday, numbers that show an ongoing downward trend. It's unclear whether the protests, which resulted in the shutdown of city-run testing sites, have suppressed overall testing numbers.

An additional 34 fatalities from COVID-19 brought the city's death toll to 1,324, including 699 nursing home residents.

Among those lost was 48-year-old Philadelphia firefighter Eric Gore, who succumbed to COVID-19 this week, officials said. Gore was a 24-year-veteran of the department most recently stationed at Engine 37 in Chestnut Hill.

It is with deep sorrow that the Philadelphia Fire Department announces the line-of-duty death of Firefighter Eric Gore,...

"The COVID-19 pandemic continues to show signs of receding," said Farley. "The number of people who are hospitalized for COVID-19 is now 60% below the peak that we saw in late April. While the number of newly reported deaths is 34, many of these deaths occurred some time ago. Overall, we are continuing to see decline, and are now averaging fewer than 10 per day. While there are positive trends in the data recently, the Health Department continues to monitor a variety of data sources to ensure that any move to the yellow phase is done safely."

Prior to the protests, Philadelphia appeared ready to enter the yellow phase of Pennsylvania's COVID-19 reopening plan on Friday,. Kenney said he was pleased to see the progress, but had not yet made a decision about the yellow phase, which would see the easing of some restrictions.

"I'm not going to say that officially," Kenney said. "Certainly the numbers are trending in the right direction. We'll have to see how today, tonight, tomorrow (and) Friday (go) to see where we're at from a crowd point. The numbers are looking better and better each day. I am a little concerned with with what might happen with (thousands of people) close together without a mask for days on end. Hopefully, we won't see a spike."