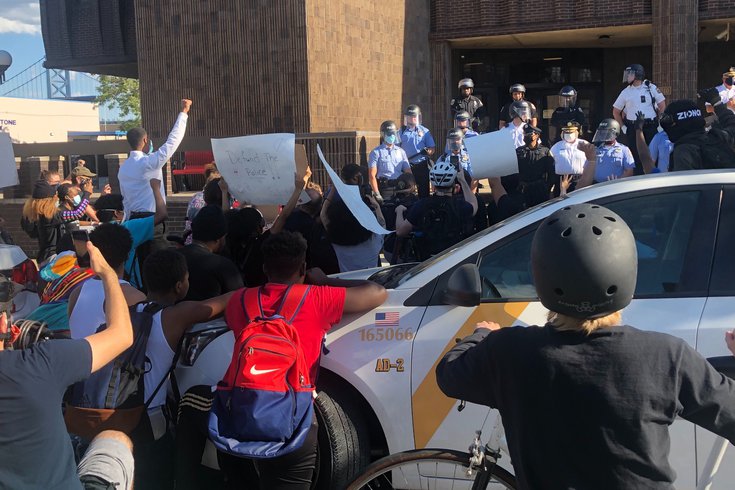 Philadelphia religious leaders have signed a pair of letters calling for racial justice following the police killing of George Floyd. Above, a protest earlier this week in the city.

Calling itself "The Clergy Coalition of the Unheard," the group outlined its requests in a letter signed by various religious leaders in the Philly region.

"We are mindful that the late Rev. Dr. Martin Luther King, Jr. called riots the language of the unheard," the letter says. "But, Dr. King went a step further and suggested that we ask ourselves this question: What is it that the unheard are saying?"

The group called on council to stand against the potential rehiring of 13 police officers who were fired for posting racist, Islamophobic and misogynistic comments on social media and allocate funding to the Black Doctors COVID-19 Consortium, a group conducting diagnostic testing and contact tracing in black communities heavily impacted by the coronavirus.

Two of the group's demands were essentially met not long after the letter was sent.

The Frank Rizzo statue was removed from Thomas Paine Plaza. The clergy also asked city council to demand three additional Minneapolis police officers to be charged in the killing of George Floyd. Minnesota prosecutors did so Wednesday and upped the murder charge against Derek Chauvin, the officer who kneeled on Floyd's neck.

The letter was spearheaded by POWER, a coalition of about 50 Philadelphia congregations seeking racial justice.

Another religious group, Interfaith Philadelphia, also released a letter mourning Floyd's death and denouncing the actions of Chauvin. It called on politicians, business leaders and the news media to join efforts "that lead away from polarization and towards a unity of purpose that fosters a shared future."

Archbishop Nelson Perez and former Mayor Wilson Goode joined about two dozen leaders of the Christian, Jewish, Muslim and Sikh faiths in the signing the letter.

"We support non-violent action to reform structural and systemic impediments to justice and equity, while unequivocally condemning violence and the destruction of property," the letter says.