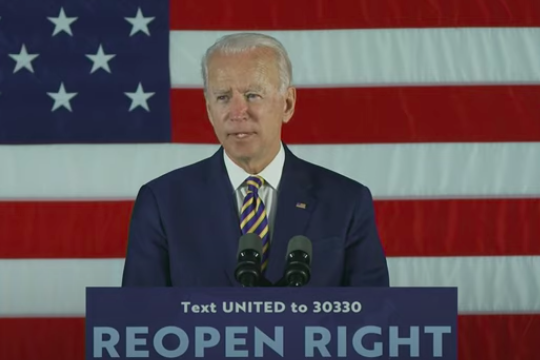 Joe Biden criticized President Donald Trump's handling of the COVID-19 pandemic during a visit to Delaware County on Wednesday, accusing him of giving up amid the hardships.

Biden, the presumptive Democratic presidential nominee, addressed the United States' reopening process during a speech in Darby. He also held a roundtable discussion with small business owners in Yeadon.

"One of the problems is that in my view, nobody is taking responsibility here," Biden said in Yeadon. "The President says, ‘It’s not my responsibility. It’s not my fault.’ Well, the truth is, there has to be to deal with [the pandemic]."

During his remarks in Darby, Biden accused Trump of botching the initial response to the coronavirus and then running from the problems that ensued.

"He takes no responsibility, he exercises no leadership, and now he’s just flat surrendering the fight," Biden said. "Instead of leading the charge to defeat the virus, he just basically waved a white flag and has retreated.

"He wasted months and months and months passing the buck, blaming everyone else, refusing to act when he should have been preparing our country for a long-term response and building our resiliency to respond to future flare ups."

The visit marked Biden's third trip to Pennsylvania in the last three weeks.

"We have to do everything we can to avoid deadly spikes in the infections as people begin to back out into the world," Biden said. "We’re not that much better prepared today for the run of cases that overfills our intensive care units than we were three months ago.

"We have to help give people the assurance and precautions that are necessary to restart the economy with confidence. If Americans lose what faith they have left, what little faith they have left in the government’s ability to manage this pandemic, we’ll see much deeper and longer lasting economic impacts.”

Biden has remained at his Delaware for the majority of the coronavirus pandemic. But when he has traveled, he has frequently headed to the Philadelphia region.

Biden gave a speech at City Hall on June 2, calling on Congress to pass police reform legislation and urging America to address racism in the wake of George Floyd’s death. Biden also criticized Trump for fanning the flames of hatred, claiming the president was part of the problem.

Last week, Biden participated in a roundtable event with community members in Philly to discuss a safe approach to rebooting the economy.