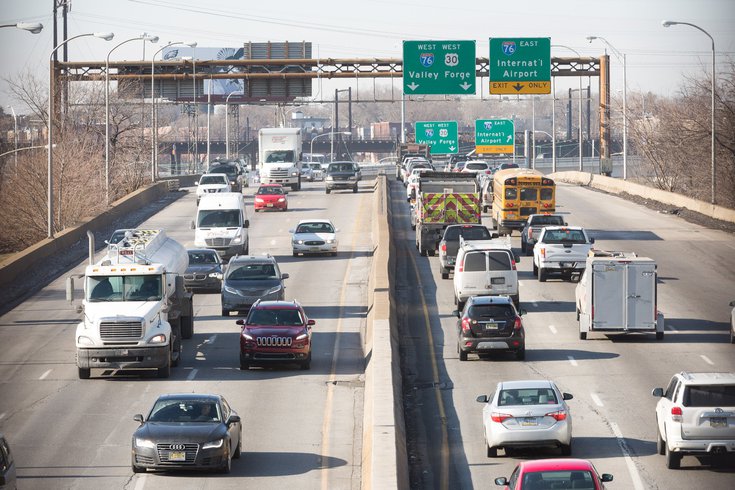 Demonstrators flooded Interstate 676 on Sunday afternoon, causing the city to shut down the highway for over an hour.

Hundreds of demonstrators protesting against racism and police brutality in Philly marched across Center City and along Interstate 676 on Sunday, causing the highway to shut down for over an hour.

As protesters made their way from City Hall to the Vine Street Expressway, the city shut down the highway. The closure was lifted later Sunday afternoon.

The rally, called The People Have The Right to Protest Racism, was organized by Philadelphia’s Party for Socialism and Liberation.

Protest organizers called for the resignation of Mayor Jim Kenney for the police department's use of tear gas, pepper spray, and rubber bullets against demonstrators in West Philly on May 31 and on I-676 on June 1. They also called for the disarmament of police officers  who patrol these protests in the future.

The organizers of the rally said that the use of tear gas against protesters last month was "completely unprovoked."

"The extremely late and insincere apologies by city officials aside, this was obviously a calculated move to help crush the nationwide uprising against racist police terror," event organizers wrote.

#ppd could not block us from taking the highway. When you are big & your weapons bigger ordinary people can dance through your blockades! #phillyprotests #phillyprotest #phillysocialists pic.twitter.com/oakINgJz33


Philly protesters return to I-676 to assert their right to protest. #phillyprotests #BlackLivesMatter pic.twitter.com/znAU75lGx6


I-676 PROTEST: Chopper 6 was overhead as protesters marched onto the Vine Street Expressway in the heart of Philly today. It’s the same highway where demonstrators were hit with tear gas, bean bags, pepper spray during a protest last month. #Phillyprotest https://t.co/HGzKxvEF3K pic.twitter.com/A2numxR8aF

Peaceful protests turned violent in West Philly on May 31, leading to vandalism and looting. Five police officers were injured and four police cars were burned. Several cops were hit with bricks and molotov cocktails thrown by looters, and police confirmed that tear gas was sprayed to disperse the crowd.

The following day, hundreds of protesters packed onto I-676, blocking traffic and prompting the closure of the Ben Franklin Bridge.

Photos and videos from the scene showed demonstrators scrambling up an embankment to exit the highway as Philadelphia SWAT officers launched tear gas at them. Police also used pepper spray and white smoke. About 24 protesters were arrested at the scene, including some who were seen being dragged down the highway embankment by officers after they were caught attempting to flee.

At first, Kenney and Philadelphia Police Commissioner Danielle Outlaw supported the use of tear gas. Kenney and Outlaw ultimately apologized on June 25 calling it an "unjustifiable use of force."

Protests calling out racism and police brutality have taken place regularly across Philadelphia since late May in the wake of George Floyd’s death. Floyd, a Black man, was killed on May 25 by Minneapolis police officer Derek Chauvin.

At least four separate demonstrations occurred on the Fourth of July in Philadelphia.