The Salute to America celebration spanned from Boston to Washington, D.C. on Saturday 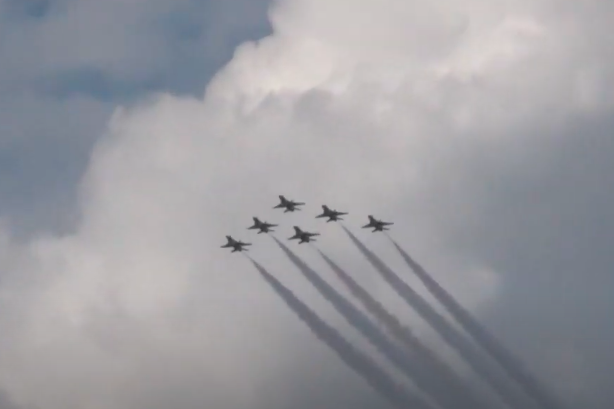 The military flyover happened across Philadelphia early Saturday evening to celebrate the Fourth of July.

A military jet flyover honoring the “Great Cities of the American Revolution” took to the skies across the Philly region on Saturday as the nation celebrated the Fourth of July.

The military jets flew across Philadelphia early Saturday evening. Here are some of the military jet flyover scenes captured by residents across the Philly region on the Fourth of July.


Military flyover New Jeresy this afternoon with the .@AFThunderbirds’ B2 stealth bomber and B1 bomber passed over my sister’s home. #July4th #July4th2020 pic.twitter.com/YyDWXRC6vx


Ok so this just happened over our house!! A military flyover from Joint Base McGuire-Dix-
Lakehurst heading to DC for the 4th of July celebration. I wasn't fast enough to grab my phone so I only got the last bomber jet.
Fighter, stealth & strategic bombers too!!
LOVE OUR MILITARY pic.twitter.com/kCuJUNfHNE


The fighter jet flyovers, including the 1,700 military personnel involved, did not cost taxpayers, the defense department said.

"Flying hours are a sunk cost for the Department of Defense, and these aircraft and crews would be using these hours for proficiency and training at other locations if they were not conducting these flyovers," the department said.

In April, the U.S. Navy Blue Angels and the Air Force Thunderbirds flew over Philadelphia to show support for health care workers on the frontlines of the coronavirus pandemic.