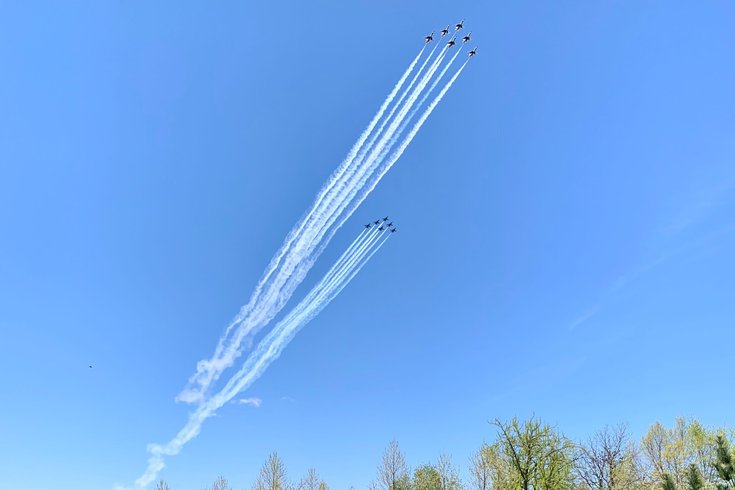 Fighter jets will flyover Philadelphia as part of the national July Fourth celebration on Saturday. Pictured above are aircraft from U.S. Navy Blue Angels and the Air Force Thunderbirds that flew above the city in April.

Military jets will fly over Philadelphia as part of the national Fourth of July celebration, Salute to America.

The aerial display will honor the "Great Cities of the American Revolution," according to the U.S. Department of Defense. The flyover will pass above Philadelphia, after Boston and New York and followed by Baltimore, before reaching Washington, D.C.

The jets will arrive at the center of Philadelphia around 5:15 p.m. and fly over Independence Hall and the Liberty Bell, NBC10 reported.

Salute to America also will include a flyover at the Mount Rushmore National Memorial in South Dakota on Friday, which will host its first firework show in 11 years. President Donald Trump is expected to attend the event.

Fireworks at Mount Rushmore were halted in 2010 after a pine beetle infestation destroyed the ponderosa pines in the area, resulting in an increased risk for wildfire. Some experts remain concerned about potential wildfires this weekend as the area of South Dakota is experiencing a moderate drought, The Weather Channel reported.

The fighter jet flyovers, including the 1,700 military personnel involved, will not cost taxpayers, the defense department said. "Flying hours are a sunk cost for the Department of Defense, and these aircraft and crews would be using these hours for proficiency and training at other locations if they were not conducting these flyovers," the department said.

In April, the U.S. Navy Blue Angels and the Air Force Thunderbirds flew over Philadelphia to show support for health care workers on the frontlines of the coronavirus pandemic.